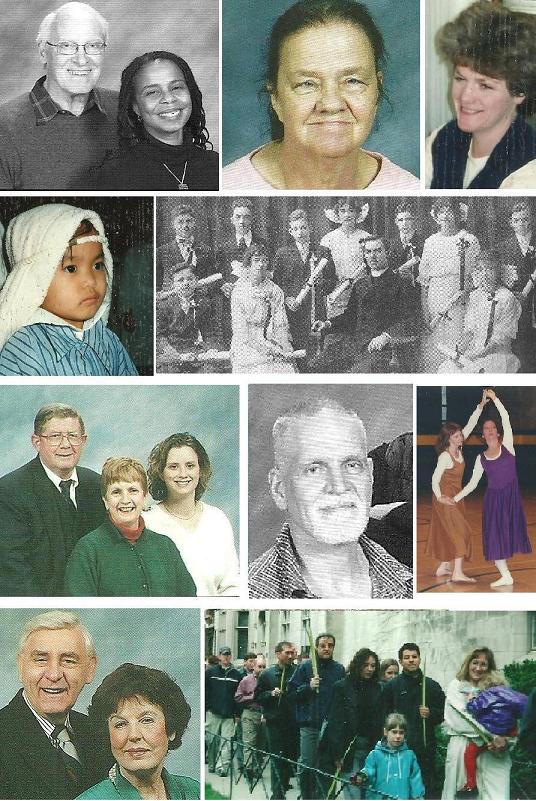 A history of St. Gertrude: One hundred years in the life of a faith family

This abridged history of the St. Gertrude Roman Catholic parish in the Edgewater neighborhood of Chicago was read at Pentecost mass on May 27, 2012. The full history is to be published later this year.

Eileen Quinlan and the other parishioners here and there in the pews of St. Gertrude church knew something was wrong. Nine a.m. had come and gone, and, though the minutes ticked away, Father Bill Kenneally hadn’t arrived at the altar to start mass.

“Then he came out, and he was white,” Quinlan remembers. “He said he just watched the second plane hit the building. He was so shaken, he could hardly say mass.”

In the hours and months that followed, the people of St. Gertrude drew together as a faith family to confront the terror, confusion and anger of that day.

They provided support for each other as they had in fine times and dark times since the founding of the Roman Catholic community in 1912. They reached out to the rest of the Edgewater neighborhood. And they pondered the meaning of the day and what God was calling them to do in response.

Inside the rectory, telephone calls were quickly made to the leaders of Christian, Jewish and Islamic congregations to plan an interfaith service in the church on the following Sunday.

To help the older children at the St. Gertrude campus of Northside Catholic Academy cope with the shocks of the day, Father Kenneally led a prayer service at lunch time in the school cafeteria.

The doors of the church were left open for anyone who wanted to pray quietly.

That night, the Filipino members of St. Gertrude were in the midst of their annual novena to Our Lady of Penafrancia. A mass in response to the terrorist attacks of the day was joined with the novena, and 300 to 400 people attended.

“The church was packed, even though there was no notice,” recalls Carol Clennon, a lifetime member of the parish. “Like pilgrims, they just came.”

Coming to church that night felt, Margie Skelly says, “very much like the obvious thing to do.”

What mattered, she says, wasn’t so much the prayers said or songs sung but “the presence of all those people feeling vulnerable and connected to each other at the same time. Being at church felt like the absolute best place to be.”

Unlike many Catholic parishes in Chicago, St. Gertrude has never been identified with a single ethnic group. Rather, it has been a religious family where, over the course of a century, people of diverse backgrounds, viewpoints and social status have searched together to understand the message of Jesus and carry it out.

“This is a faith-filled community that really wrestles with the issues of its faith and its place in today’s society,” says Father Dominic Grassi who, in 2006, became the sixth St. Gertrude pastor.

The initial pioneers were immigrants from Germany, Ireland and Luxembourg, and, because Edgewater offered a wide range of housing — from mansions to apartments to two-flats and single-family homes — they represented many rungs on the socio-economic ladder.

By the 1980s, the people in the pews included immigrants with roots in other places ¬¬¬— Italy, the Philippines, Mexico, Poland, Nigeria and other parts of Africa. The blue-collar flavor of the parish was shifting as college-educated professionals from across the city, the nation and the world were moving in. Also arriving were many gay men and lesbians, individually and in couples, attracted by the openness of the St. Gertrude faith family.

The multiplicity of perspectives that such diversity entails has helped the parish develop a flair for learning and innovation. But it has also led, at times, to friction.

Through it all, though, the people of St. Gertrude have found a way to worship together and live together despite their differences.

In 1910, Catholics living in the northern portion of St. Ita parish were chafing at the inconvenience of traveling a mile or more each Sunday for mass. A year later, three men from the neighborhood met with Archbishop James Quigley and made their case for a new parish.

He agreed. And the new St. Gertrude parish was established on January 3, 1912, with Father Peter Shewbridge as pastor.

Like the early Christians, the people of St. Gertrude had to improvise in those initial days of the parish.

On Friday, Feb. 2, Father Shewbridge celebrated the first mass in the new parish in the apartment at 6328 N. Magnolia. where he was living. Two days later, he presided at two masses in the auditorium of the Hayt School for a total of 257 people.

For seven more weeks, during a bitter Chicago winter, Father Shewbridge and parishioners met for mass at Hayt. That meant toting the altar, linens, chalice, hosts and other necessities six blocks from the Magnolia apartment and from a nearby store, and back again.

Meanwhile, construction was underway on a temporary wood-frame, one-story church on land now occupied by the St. Gertrude rectory. It was completed in time so that services could be held there on Palm Sunday, March 31.

While a testament to the determination of the pioneer parishioners, the structure was unheated, and, according to parish lore, there were times when Father Shewbridge would have to place his hands around the cruets for a few moments to thaw the contents before pouring the wine and water at the Offertory.

That building was one of two churches that St. Gertrude parishioners erected in the space of less than a year. The second — a three-story, red-brick combination church-school structure — was built at 6216 N. Glenwood and dedicated by Archbishop Quigley on Dec. 1.

Three months earlier, the parish school had opened for 80 pupils in temporary quarters in the former Lucas home on Granville near Broadway. Overseeing the education of the youngsters were the Sisters of Charity of the Blessed Virgin Mary (known as the BVMs), under the leadership of Sister Mary Verena. It was a task the BVMs would carry out for the next seven decades.

The parish boomed, and parishioners planned and collected money for a new church on the northwest corner of Granville and Glenwood, as well as for a rectory and a convent. Leading the effort was Father Bernard Heeney, who had replaced Father Shewbridge as pastor in 1918.

The new residences for the parish priests and sisters were constructed in 1929, and the limestone for the church had been cut and paid for when the stock market crashed.

Given the dire economic circumstances, Father Heeney wanted to delay construction of the church. But the people of the parish insisted that the building go ahead.

One example of the sacrifices they made: Parish women donated wedding rings and other jewelry to be melted down and fashioned into a solid gold chalice festooned with 30 diamonds, rubies and other gems, commemorating the dedication of the new church on Nov. 15, 1931.

The cost of the new church, rectory and convent came to $600,000, or the equivalent of $9 million in today’s money. It was one of the few large structures of any sort built in Chicago during the Depression.

At the age of 91, Ann Corso was in a nursing facility. She hadn’t had a home in St. Gertrude parish for more than 20 years. Yet, when her daughter Madaline Kiedysz would come to visit her, she had questions upon questions about her old friends and neighbors.

“We weave our lives into and out of so many other lives and families,” says Kiedysz, “and we are all connected by one common thing, the yarn that is St. Gertrude’s.

“It reminds me also,” she says, “of the prayer shawls that the women in the parish make now and again, how the prayers are woven into the yarn and without words offer comfort to those who receive them.”

The middle of the 20th century when Ann Corso was living on Wayne Avenue was an era in Chicago when a neighborhood was known by its Catholic church, even among non-Catholics.

The children of St. Gertrude called their area the Turf. North of Devon Avenue, in the St. Ignatius parish — that was the Patch. “It was foreign territory,” says Dick Merrill. “It was like you were going to a different city.”

In the 1940s, when Carol Corbett was in St. Gertrude school, she remembers, “We wore uniforms — a navy-blue dress with long sleeves, a red tie and a white collar and cuffs which had snaps on them.”

Report cards were handed out in the classroom by one of the parish priests, and Corbett says, “When being dismissed from school, we marched out in twos while the music of John Philip Sousa was being played.”

Scores of BVM sisters shepherded and mentored generations of St. Gertrude children. “We loved those ladies,” wrote John Gaughan in a 1998 reminiscence.

He remembered the priests fondly as well: “We would knock on the rectory door and ask Fr. Tom Fitzgerald for $1 so we could go to the Protestant church on the corner of Granville and Greenview and rent the gym for an hour or so. He always said, ‘Yes.’ ”

Over the past century, tens of thousands of people have been members of St. Gertrude parish.

Some parishioners have won fame. But most have been everyday people, such as Catherine Healy, a truant officer, and Frank Combiths, a produce merchant and one of the parish founders….

And James Ennis, a handwriting expert, and Benita Coffey, who grew up at St. Gertrude and has spent a lifetime with the Benedictine Sisters of Chicago, and John and Honor Loarie who celebrated their golden wedding anniversary in 1957, and Delle Chatman, a playwright and screenwriter…

And James Manning, a welder, and Janine Denomme, a gay rights activist, and Margaret Baynes, a women’s wear buyer, and Marty Hegarty, a resigned priest, and Denis Quinlan, a public relations executive, and Sister Dolores Perry, a BVM nun who taught in the parish school…

And Mary Heidkamp, Pat Conway and Kathleen O’Toole, stalwart volunteers and leaders, killed in an auto-truck collision in 2008 while returning from the funeral of another longtime parish member.

Today, Madaline Kiedysz sums up the deep affection that generations of parishioners have felt for St. Gertrude by saying,

In February of this year, she attended the funeral of seven-year-old Jake Wons, a second-grader at the St. Gertrude campus of the Northside Catholic Academy who had lost his battle with cancer.

“I looked around the church,” she says, “and saw that all this is still going on — this entwining of families, many that are so familiar to me and many more that are not. And I was overwhelmed by the strength and compassion of our community.

“It felt wonderful knowing that the potholder is still being woven.”