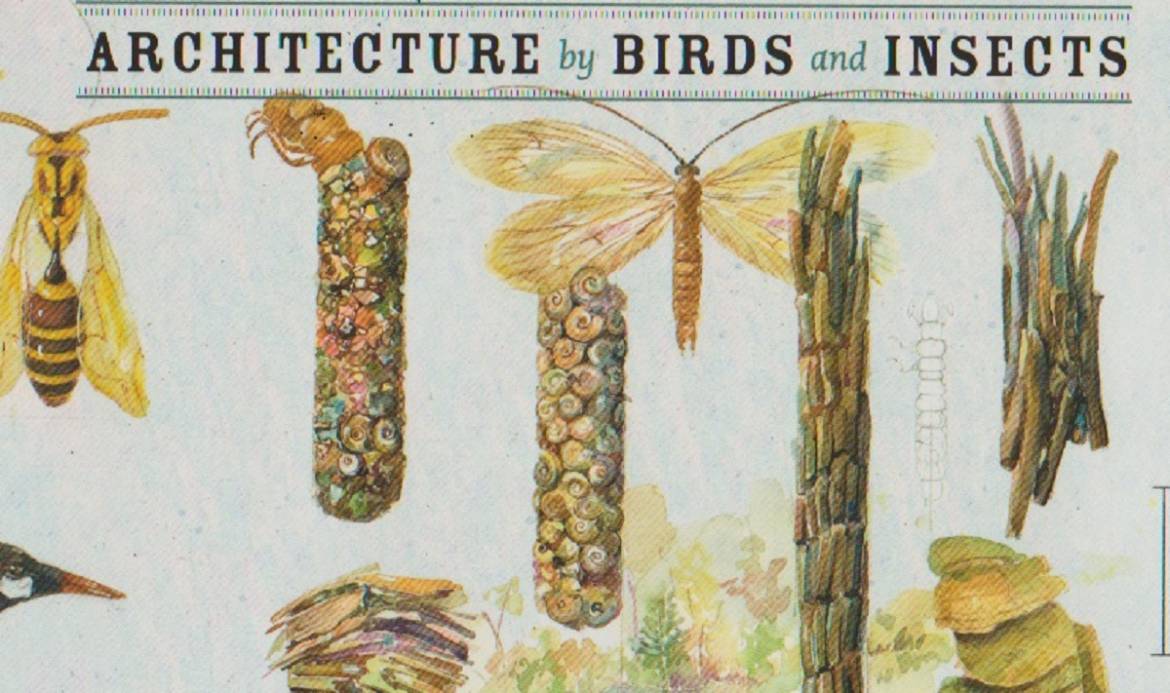 Some birds and bugs construct nests by sewing or weaving strands of material together.

And some fashion nests out of various kinds of paper-like stuff that they create using their saliva.

And some form nests out of mud. And in depressions they make or find. And in mounds they raise.

And some carve nests out of wood.

Sometimes, nests — at times, many by the same individual — are constructed as part of a mating ceremony, but, much more often, they’re created to be the home of incubating young and to serve as their birthing room and as their childhood playhouse.

The uglynest caterpillar builds a nest for its eggs in rose bushes or in cherry or hawthorn trees. But, then, when the eggs hatch, the larvae themselves build a web nest, also called a tent nest (often seen by humans as unattractive, hence, the insect’s name), in which they go through various stages until they come out as moths.

Nests are little works of art, built with care and precision, confident and complete. They work!…Best of all, they are of use, providing a service. They are natural materials recycled to create homes and safe places to nurture and protect young, while also integrating into the surrounding environment.

So writes Peggy Macnamara in the introduction to her 2008 book Architecture by Birds and Insects: A Natural Act, a collection of more than fifty of her paintings, featuring perhaps 200 images of nests and their makers.

Macnamara, an associate professor at the School of the Art Institute of Chicago, has been the artist-in-residence at Chicago’s Field Museum of Natural History since 1990. Most of the nests in her book were painted from the museum’s vast and varied holdings.

I can’t help but be amazed by these constructions, and I marvel at the animals’ instinct….They work as I do: slowly, persistently, and calling on the invisible answers of instinct.

After she began painting these nests, Macnamara was struck by parallels between these bird and insect homes and those of human beings. She writes:

These life-size versions of nests could be found in the adobes of South America, the conical stone domes in Turkey, and the thatched circular huts from Venezuela. The small-floating islands in Inle Lake, Myanmar which are sold and traded, resemble larger version of the grebe’s nest.

Yet, even if the homes of birds and insects have similarities with some kinds of human habitations, can anything built through instinct be called art?

Macnamara is right that instinct is one of the techniques that a human artist employs in the act of creation. But can something formed without conscious thought, just through the promptings of evolutionary patterns, be considered art?

It can’t be art in the sense that the best art by human beings is work that opens the eyes and minds of the audience. Think of Hamlet and Guernica and anything by Mozart.

A tree may be beautiful, a wonderful mix of colors and forms, but it is not art in this sense. As spectacular as the Grand Canyon is, it can’t hold a candle to The Adventures of Huckleberry Finn.

Nonetheless, as Macnamara notes, the birds and bugs that create the nests in her paintings are acting upon their environment in a way that results in something new.

“Steps back and observes”

On the other hand, it is a unique nest inasmuch as this particular individual has selected these particular materials to put the nest together in a particular way that is like all other nests by the species, and yet unlike them all in its singularity.

And anyone watching the creation of the nest might be tempted to think that some level of thought, above and beyond instinct, was in action. Here’s how Macnamara describes it:

The male actually builds a kind of hut on the forest floor, complete with a waterproof roof. He covers the center of the façade with dark green mass; here on the “canvas” the bird arranges his treasures. On the left might be his shiny insect collection and to the right some shells. Then the bird gathers small flowers and creates a colorful line through the center. As the bird brings more elements to the installation, he actually steps back and observes the final “composition.” If dissatisfied, the bowerbird adjusts the flowers ever so slightly.

What the bird is creating isn’t actually a nest. It’s a bower, and it’s part of a mating effort that also includes a dance and a display of his colorful crest. If he’s able to attract a mate, the female is the one who ultimately will build a much simpler nest nearby for her eggs.

An edible nest and one weighing two tons

Here are a few interesting insights: