Book review: “Basketball (and Other Things): A Collection of Questions Asked, Answered, Illustrated” by Shea Serrano, illustrated by Arturo Torres

Shea Serrano’s Basketball (and Other Things): A Collection of Questions Asked, Answered, Illustrated is a bag-of-potato-chips sort of book.

No, that’s not quite right.

It’s the book equivalent of seven or eight bags of over-salted, over-flavored snacks to tide you over while watching a basketball game (or any other sporting event) on TV — potato chips, yes, but also cheese popcorn, Cheetos, Doritos, potato sticks, Chex Mix, Pringles and pretzels.  You get the idea.

Basketball (and Other Things), published in 2017, is like that snack buffet, totally without intellectual nutrition.

This is not a book I’d be likely to buy.  It was a Christmas gift from my friend Mike.  And I thought:  Well, I’ll page through it.

Two hours later, I was still trying to put it down, but I’d find myself caught up in just…one…more…chapter.

I’d started with Serrano’s introduction in which he explained that he’d written 33 chapters based on 33 somewhat off-the-beaten-path, off-the-wall questions.  He also added:

“The questions are not related to each other, and what I mean when I say that is the book isn’t a thing that has to move front to back.  It doesn’t flow from one chapter to the next like the way a regular book would.  In most cases, you don’t have to read one chapter to read a chapter that comes after it.  You can jump in wherever.”

Just like a snack buffet.  You nosh on pretzels for a while, and then go to Chex Mix or Cheetos.

Serrano doesn’t say this, but Basketball (and Other Things) is a book that doesn’t require you to read everything.  There’s an anarchic sense to his writing that says to take whatever you want and leave the rest.

For instance, when it comes to salty snacks, I like to eat all kinds.  But I don’t like jalapeno or barbecue flavoring.  Yuck!  So, I just leave the bowls of that stuff alone.

That’s what I did with Serrano’s book.

There were at least 10 of his chapters that I just ignored, most of them having to do with dunks (which, while balletic and manly, only produce two points [and maybe a poster], or one point less that an arching three from the corner). 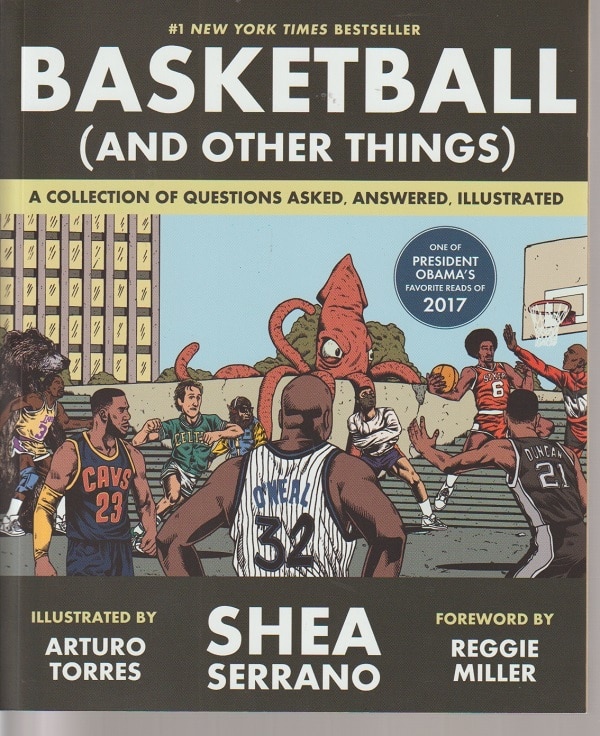 I found myself skipping some chapters and skimming others because Serrano’s basketball worldview for the book is 1980 to the present.

That leaves out a whole lot of the years in which I was interested in the NBA.

Because I’m older than the hills, my basketball worldview runs from roughly 1965 (when I wanted to grow up and be Bill Russell) through the Larry Bird years to 1998, the year of the Bulls final Michael Jordan championship.

Since then, I haven’t given the NBA too much of my attention.

[By the way, when I went on the World Wide Web to double check some of those years, I came across the distressing information that Jordan is now 56 and Bird is 63 and Russell is 85 {!}.  Alas, alas, alas.]

Such as including Russell at number 6 in a list of the greatest basketball players of all time.  (He’s wrong.  Russell’s 1st.)

And including Russell at number 2 in a list of the greatest centers of all time.  (He’s wrong.  Russell’s 1st.)

And including in a chapter on creating your own Frankenplayer, i.e., sewing together stuff like David Robinson’s arm muscles into the monster, and Manute Bol’s wingspan, he includes:

I appreciate that — although I’m afraid Serrano doesn’t understand what it took to get those 11 championship rings.

Actually, if I were building a Frankenplayer, I’d build:

That’s the heart of Serrano’s book.

He asserts a lot of opinions and judgements and evaluations, and the reader, by definition, is expected to argue with him.

Maybe even throw the book across the room.

I didn’t always disagree with Serrano.

His answers, after six pages of analyzing a whole lot of stats and results, are:

“Is Kobe Bryant a dork?

“How many years during his career was Kobe Bryant the best player in the league?

It’s very eye-opening to think of how big Kobe’s name was during his career and how relatively unaccomplished he was, at least in terms of BPITL.

And I’ve always thought he was a dork.

In conclusion, let me just say that Serrano is absolutely wrong when he asserts that Gary Payton and Shawn Kemp were the most perfect duo in NBA history (simply on the basis of their nicknames, The Glove and the Reign Man, hrumph!).

The right answer is:  Michael and Scottie.

No need for nicknames.