Book review: “Chicago Apartments: A Century and Beyond of Lakefront Luxury” by Neil Harris with Teri J. Edelstein

Reading Neil Harris’s Chicago Apartments: A Century and Beyond of Lakefront Luxury, the newly published and expanded second edition of his 2004 book, it’s clear that the relatively modest building at 2800 North Pine Grove Avenue is one of his favorites.

In truth, this eight-story structure, built in 1893 and known as The Brewster, is only modest in the company it keeps with the 106 other luxury apartment buildings in the book, most of which are taller — much taller — pricier and closer to Lake Michigan.  Consider how Harris rhapsodizes about the Brewster’s “massively thick, cyclopean stone front” and goes on:

“Rich decorative carvings and projecting window bays, along with the arresting pink color, give the Brewster a strong presence on Diversey and a monumental quality on Pine Grove.

“The interior, however, is a daring ballet of metal and glass; a naturally lit atrium with open elevator, staircase, and bridges offers access to the apartments.  The walkways consist of glass prisms, which intensify the impression of light.  It is one of the most exciting interiors in the city and as such has been used in several motion pictures.”

“A mansion within a building”

Chicago Apartments is that sort of book — the sort that invites the reader (and the author) to gush over favorites.

It is the book-world equivalent of the rubbernecking that many of us do, driving or walking through expensive neighborhoods, assessing and weighing the attractiveness of homes that, in the real world, we will never be able to afford.  We give thumbs-down to those we think garish or dull or ugly and thumbs-up to the facades — because, of course, we’re only seeing the exteriors — that resonate with us as artful in whatever way we define that.

Since the opulent structures in Chicago Apartments were chosen because of their proximity to the lake — most have stunning lake views — the book is akin to a drive up and down Lake Shore Drive and South Shore Drive, from 7300 South to 5600 North, from South Shore to Edgewater.  Indeed, the ones in the book as well as their sky-high neighbors form a wall of windows — “thousands and thousands of windows” — overlooking the Drives and the lake.  And the most opulent among them, Harris writes, “boast spaces and features that match the richest fantasies.”

Sara Paretsky, one of Chicago’s preeminent novelists, notes in her introduction that Chicago Apartments provides

“a history of the luxury apartment, how the very wealthy were persuaded to leave mansion living precisely because they could have a mansion within a building…and also have access to the lake and the parks.”

How ritzy ritzy can be

Writing about the “thin market” of buyers and renters for sumptuous apartments in recently constructed or planned luxury high-rises, Harris notes that, “in a city of almost three million people, they amount to only several thousand families.”

Similarly, the old and new structures in this book, as imposing as they are, are home, I’m guessing, to a population something south of 20,000. Nonetheless, I would imagine that those present residents as well as perhaps some former ones are the target audience for City Apartments.  At least, in terms of sales.  Its $85 price tag is, after all, pretty hefty.

That said, this is a book rich in a part of Chicago history and living that rarely gets much attention, amid such works as Native Son by Richard Wright, The Jungle by Upton Sinclair, The House on Mango Street by Sandra Cisneros, City on the Make by Nelson Algren and The Adventures of Augie March by Saul Bellow as well as libraries full of sociological studies and historical examinations of Chicago’s race relations, neighborhoods, poverty, landscape, streetscape, transportation, business, environment, politics and corruption.

You only have to open this book and get a glimpse into just how ritzy ritzy can be.

And Harris is able to bring the reader inside of several of the swankiest structures, such as 1500 N. Lake Shore Dr.

This 25-story cooperative building, faced in limestone and brick in the French Renaissance manner, was erected 1927-1929 on the spot where Chicago Daily News publisher Victor Lawson had had his million-dollar mansion.  “Portions of the house,” Harris notes, “were, in fact, inserted into some apartments in the new building.”

Regarding the opulence of the residences, Ruth Berman wrote in the Chicagoan, “Olympus is more beautiful, but the gods have never chilled their nectar in such magnificent ice boxes.”

Harris provides eight pages of photographs of the lavish interiors, including two from the residence of William Wrigley Jr., the founder of the chewing gum empire and owner of the Chicago Cubs — although he makes no mention of whether pieces of the Lawson mansion ended up in any of these spaces nor does he include a shot of the businessman’s ice box. 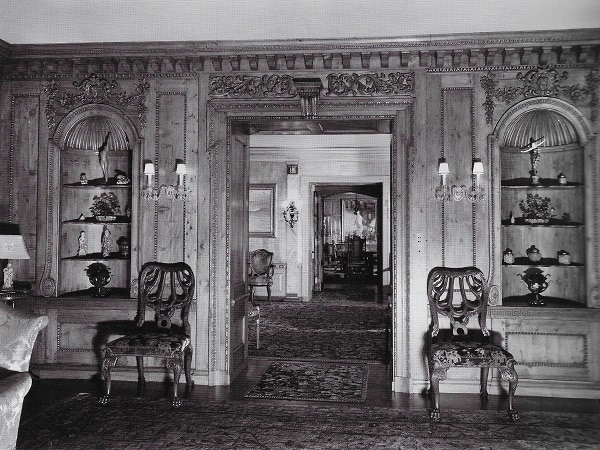 The 2004 version of this book, published by Acanthus Press, had only 100 entries.  For this new edition, Harris dropped six — two of which were pretty far from the lakefront — and added 13.  Of those, two are older buildings that, for some reason, didn’t get into the earlier book, and 11 are new, all of them built or announced since 2005.

In the first edition, Harris had four geographical groupings: South Shore, Hyde Park-Kenwood, Near North and North Side.  For the new one, he’s added Greater Loop — a recognition of the unexpected boom in construction that, despite the Great Recession of 2008, has occurred along the edges of the elevated Loop, particularly north, west and south of Millennium Park. 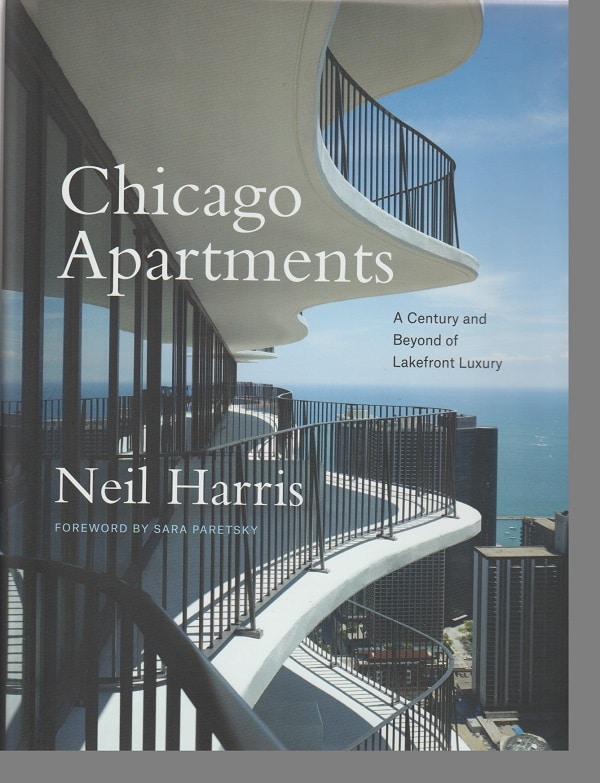 Among these is Trump Tower which, however much reviled by his political opponents and others, is, nonetheless, an unavoidable luxury presence on the Chicago skyline.

For myself, I have to say I prefer the older buildings to the newer ones especially those that follow the modernist dicta of the 20th century architectural luminary Ludwig Mies van der Rohe who emphasized extreme simplicity, a “skin and bones” style and the use of unadorned industrial steel and plate glass.

That’s probably why I like in particular one of the older works in Chicago Apartments — the six-story Campbell Apartments, built in 1916-17 at 200 E. Pearson St. It is, writes Harris, “an Italian palazzo transferred to the streets of Chicago,” with many Renaissance-inspired details.  He also adds this:

“The brown brick building, with cast concrete and metal trim, is locally celebrated as the home of Mies van der Rohe, who continued living there after completing and apparently briefly contemplating moving to his Lake Shore Drive Glass Houses, a few blocks away.

“Whatever the reasons for his decision to stay, the obvious ironies have served critics of modernism as a metaphorical label for its shortcomings.”

As I mentioned at the start of this review, my belief is that Neil Harris has a place in his heart for the 127-year-old building at 2800 North Pine Grove Avenue.

But, also, I think he has a deep affection for the one structure in Chicago Apartments that was never built — the Spire, planned for 400 North Lake Shore Drive.

“Conceived in 2005 and finally, if regrettably, abandoned almost ten years later, the Spire remains one of Chicago’s most ambitious unbuilt projects.  Its planned height of 2,000 feet would have made it the tallest building in the Western Hemisphere and granted it decisive supremacy over this city’s legendary skyline.

“Everything about the Spire breathed aspiration and extravagance.”

That fits a lesson in Chicago Apartments.  This sort of building prospers in booming economic times, but, when things go sour, as they did during the Depression, luxury buildings and their owners and many of their residents, just like the rest of us, find it hard to make ends meet.

And some projects, such as the Spire, miss their moment.

This review originally appeared at Third Coast Review on 7.29.20