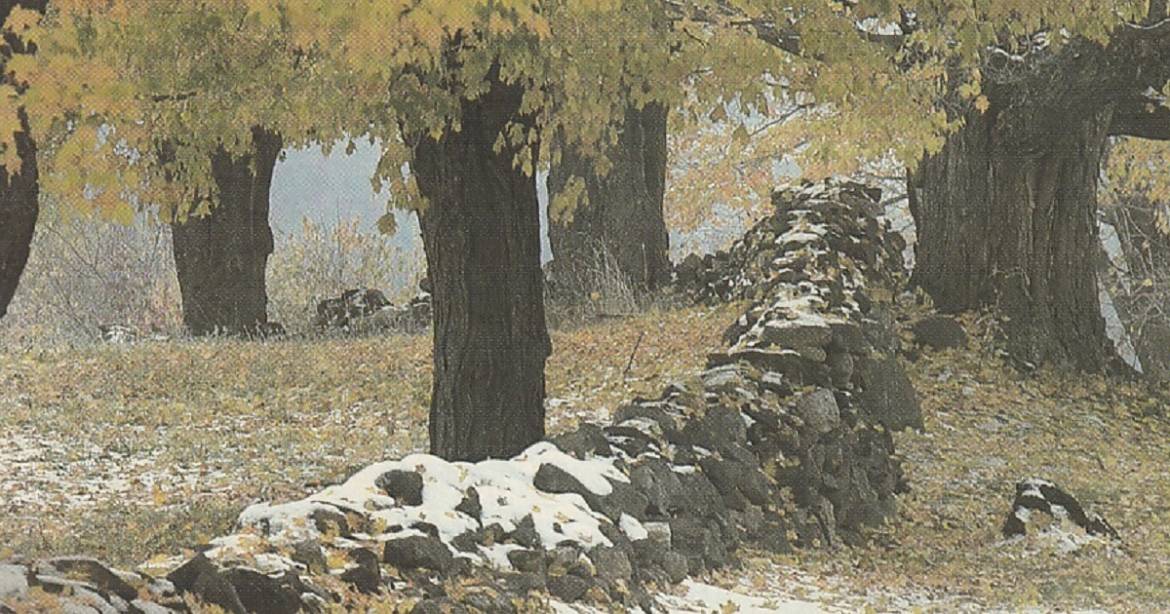 Hallie wants Larry Morgan to write a book about her parents Charity and Sid Lang.

After all, he’s a famous novelist, and, for 35 years, Larry and his wife Sally have been close friends of the couple.

Wallace Stegner, who offers this scene near the end of his 1987 novel Crossing to Safety, has Larry, his narrator, address Hallie.  But, at the same time, Stegner is addressing, through Larry, his own reader.

Hallie wants the book because it “might help answer some of the unanswered questions.  Such as, why have they stuck together all these years.  It’s been a kind of agony for both of them.”

To this, Larry responds:

“Hallie, you’ve got the wrong idea of what writers do.  They don’t understand any more than other people.  They invent only plots they can resolve.  They ask the questions they can answer.  Those aren’t people you see in books, those are constructs.  Novels or biographies, it makes no difference.  I can’t reproduce the real Sid and Charity Lang, much less explain them; and if I invented them I’d be falsifying something I don’t want to falsify.”

“Taking charge of everything”

The premise of Crossing to Safety seems simple:  Two young couples meet in 1937 as lowest-rung members of the University of Wisconsin faculty at Madison.  They fall into friendship and, for the rest of their lives, through ups and downs, remain deeply bonded.

Indeed, the scene with Hallie takes place in 1972 at the Vermont compound that Charity and Sid have maintained as a summer gathering place for their large extended family, including Larry and Sally as honorary members.

Now, twenty years after spending a year with Sid and Charity in and around Florence and after a separation of nearly a decade, the Morgans have returned because Charity is dying of stomach cancer.

They’ve been distant, in part, because of geography.  They live in New Mexico where the weather is better for Sally’s polio, the malady she first suffered in one of the early summers at the Lang compound — and survived, in part, because of Charity’s support and encouragement. But there’s more, as Sally tells Hallie:

“I’m ashamed.  For years now we haven’t been as close as we used to be.  I let myself get irritated at her way of taking charge of everything.  I thought she was a tyrant to all of you in the family.  I still do. But I shouldn’t have ever let myself forget what a wonderfully unselfish friend she has been.  I should have had the grace to forgive what I knew she couldn’t help.  We parted almost as if we weren’t friends, and it’s been eight years.”

Yet, here Sally and Larry are, responding to Charity’s call to come once again to the home and community that she and Sid have built, as she is on the edge of leaving it.

And Hallie is asking Larry to write about her parents.

After telling her that a book about them would be a falsification, Larry ruminates to himself — and Stegner ruminates to his reader — the difficulty of making “a book that anyone will read out of lives as quiet as these.”  And he goes on:

Where are the things that novelists seize upon and readers expect?  Where is the high life, the conspicuous waste, the violence, the kinky sex, the death wish?  Where are the suburban infidelities, the promiscuities, the convulsive divorces, the alcohol, the drugs, the lost weekends?

After more woolgathering along these lines, Larry adds a personal consideration:

I am their friend.  I respect and love them both.  What is more, our lives have been so twisted together that I couldn’t write them without writing Sally and me as well.  I wonder if I could recreate any of us without my portraits being tainted by pity or self-pity.

“I tell them now”

So, Larry has many reasons for not writing a book about Charity and Sid and the friendship they have had with Larry and Sally.  Yet, all of these reasons are detailed in the book that, ostensibly, he has eventually written about the friendship of the two couples, Crossing to Safety.

It’s subtle and I could be wrong here, but it seems to me that Stegner is clearly saying, halfway through the book, that it is being written by Morgan:

We liked those two from the minute of our first acquaintance.  After that shipwreck afternoon [when the two couples had a boating accident in the lake on the Wisconsin campus] we loved them both, sometimes in spite of themselves and ourselves.  At the time I could not have told them that.  I am not sure that either Sally or I was ever able to tell them, though it had to be apparent without telling.

Just in case, I tell them now.

This seems to imply that he has written the book that he said could not be written.

Again, I could be wrong.

But, even if I am, there is no question, it seems to me, that Stegner is using Larry’s difficulties with the idea of writing a book about Charity and Sid to get the reader of Crossing to Safety thinking.

He is saying to the reader that it is nearly impossible to write an interesting book about friendship, especially the friendship of two couples, from the point of view of one member of one of the couples.  He is saying that quiet, private lives, such as those lived by Charity, Sid, Sally and Larry, have none of the pizzazz that popular novels seem to need.  That a book of this sort would be read by no one.

Of course, he’s saying this more than two-thirds of the way through the novel and to a reader who has already read more than 200 pages.  So, he’s disproving his own arguments, made through Larry.

What Stegner is saying, essentially, is that such a book can’t be written, but — look! — I’ve written it.

This could be ascribed to authorial chutzpah or even authorial arrogance.  But I think Stegner is communicating a deeper insight here.

I think what he’s saying is that something as seemingly mundane as the friendship of two couples can be as riveting and universal as tragic choices or spectacular heroics.  That everyday life — the life each of us lives — can be the subject of great writing.

And I’m not alone in acknowledging that Crossing to Safety is great writing.

I first read Crossing to Safety in the mid-1990s while on vacation in Estes Park, Colorado, where the nature around us echoed the beauty of Stegner’s descriptions of nature in Vermont at the Lang compound.  My wife read it then, too, and we both loved the book.

This time I was less enamored with it, but not because I found fault with Stegner’s writing or storytelling.

Everyday life can be compelling in the hands of someone like Stegner because it is shown to be lived by complex people with a mix of good and bad, people who are attractive and also disappointing.  In writing Crossing to Safety, he has made all four of his main characters attractive and disappointing.

Well, maybe not Sally. She is strong and long-suffering, first as a pregnant faculty wife and later as the victim of polio, and seemingly without personality flaws.  The novel is dedicated to Stegner’s own wife, and maybe that’s why Sally isn’t given any rough edges.

There are rough edges galore among the other four.  Charity is one of those highly competent people who likes to organize herself and everyone around her, particularly, in her case, her husband Sid, an English professor.  She has great ambitions for him, but, although he looks like a Greek god, he’s a dreamy kind of a fellow, rich enough not to have to work hard.

Charity can be mean in bullying Sid around, and Sid can be mulish in his ambitionlessness.

Larry sees their warts but has warts of his own.  He’s a workaholic.  He’s judgmental.  He’s a stranger to self-doubt.

Reading the novel this time around, I found that I really didn’t like Charity, and I wasn’t too thrilled with Larry.  And Sid, well, he was pretty wispy.

Yet, on consideration, I think that the novel works because these people are so thorny.

The book never dragged for me, even though Charity’s bullying got on my nerves.  Larry told his story well, even if he seemed much too self-contained.

Charity and Sid are rich and, at every turn, are offering money, influence or help of some other sort to Larry and Sally who are hungry for their help.  I didn’t like the power dynamic that they seemed to have.  It would have been suffocating for me.

Yet, the proof, I think, is in the way the participants see the relationship.  Larry and Sally needed help to get on their feet and make their way in a difficult world.  Charity and Sid found joy and delight at helping the Morgans.

These four are thorny characters — people, if real, I’d have trouble being around too much.

But their thorniness is what makes Crossing to Safety a success.