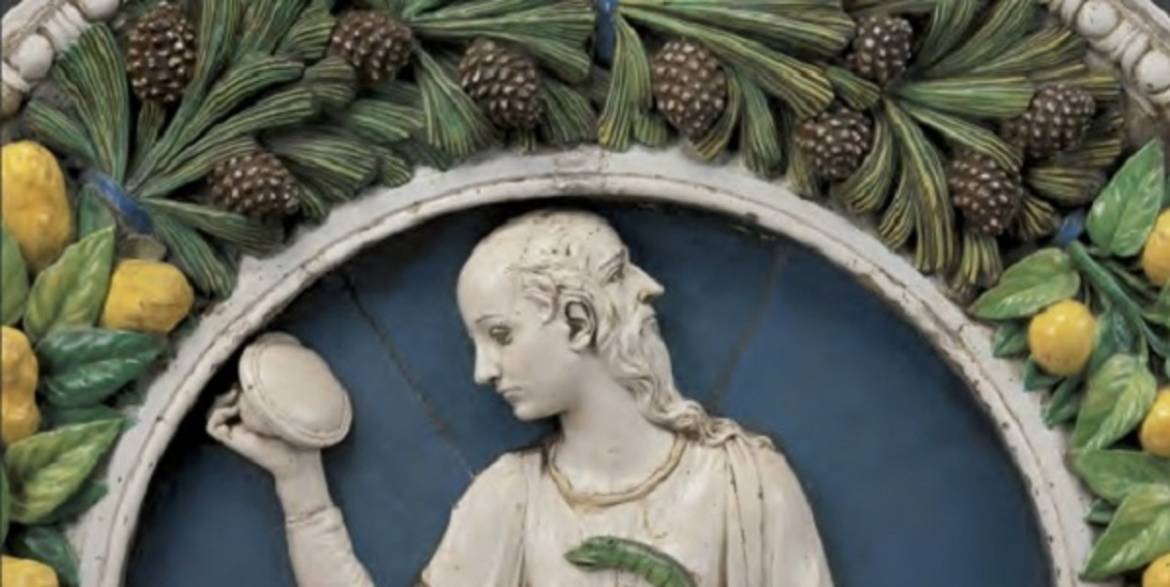 Six hundred years ago in Italy, Luca Della Robbia created an artistic technique that permitted him to fashion what might be called three-dimensional paintings or brightly colored sculpture.

It was a technique that resulted in glazed terracotta works that today remain as vibrant as when they were first fired.

He and his nephew Andrea and Andrea’s five sons formed a workshop that, over the course of more than a century, produced hundreds of small and large glazed terracotta sculptures. They had a handful of competitors, some of whom apparently learned the secret of the Della Robbia glazing method while working for the family.

The early works, particularly those of Luca, often featured figures in white against a rich, blue background. Later ones from the workshop worked in a broader range of colors.

However, by the middle of the 16th century, the Della Robbias were gone and their competitors as well, and no other artists arose to follow in their footsteps. None, it would seem, had learned the secret formula.

The art of the Della Robbias, in this way, is locked into a certain era of the past (from about 1440 through 1560), reflective of the tastes and concerns of that time, but without other examples from other eras to compare and contrast.

It is an odd twist in the story of art, as if, say, oil painting or watercolors had been confined to a narrow 120-year period.

Marietta Cambareri’s handsome and informative Della Robbia: Sculpting with Color in Renaissance Florence has been published in connection with a major exhibition of the work of the family members and their competition that opened August 9 at the Museum of Fine Arts in Boston.

It will run in Boston through December 4, and then travel to the National Gallery of Art in Washington, D.C., where it will be on display from February 5 through June 4.

Like the book, the exhibit focuses on how the family members “sculpted with color.”

This art was created at a time when the art world didn’t realize that many of the gleaming monochrome marble sculptures from ancient Green had been painted in full color. It was thought that the purity and clarity of a work of white or gray marble was one of the key aims of those early artists, and it was an aim that Western artists, for centuries, also adopted for themselves.

Given that tradition of monochromatic sculptures, Della Robbia works, even those limited to white and blue, stood out sharply. Because of the glaze, even the white portions of these works were dynamic and vigorous in an unusual way.

“The milky sky itself”

It was with those early white-and-blue works in mind that the 19th century art critic Walter Pater wrote:

“I suppose nothing brings the real air of a Tuscan town so vividly to mind as those pieces of pale blue and white earthenware…like fragments of the milky sky itself, fallen into the cool streets, and breaking into the darkened churches.”

The glazed terracotta was a strong, tough medium that stood up to bad weather year-in and year-out. For this reason, the exteriors of many public buildings in Italy were decorated with the work of the Della Robbias.

…But the more fragile forms of clay,

Hardly less beautiful than they,

These saints and angels that adorn

The walls of hospitals, and tell

The story of good deeds so well…

Cambareri’s book also includes the work of two other art experts — a collection of short biographies of the family members and their competitors by Courtney Leigh Harris and a chapter on what’s been learned in recent years about the materials and techniques of the artist family by Abigail Hykin.

Hykin’s essay provides the general reader just enough information without getting lost in esoteric details. For instance, she notes that colors were created in the terracotta by adding elements to the basic recipe:

The brilliant colors of the glaze were created by adding metallic compounds to the glaze, primarily cobalt for blue, copper for green, lead and antimony for yellow, manganese for purple, and iron for brown.

The cover of “Della Robbia: Sculpting with Color in Renaissance Florence” by Marietta Cambareri

There was no chemical way to add something to work red into the composition.   So the Della Robbias came up with a solution that harked back to ancient Greece.

Close examination of some works show that red was added to a work by painting onto the finished terra cotta.