Dorothy Day — that radical of 20th century radicals, that voice of conscience in the face of a self-centered, self-indulgent, greedy American culture, that embracer of the neediest, weakest, most damaged of the poor — is identified with New York City.

After all, it was at the southern tip of Manhattan in worn-out slums (now deeply gentrified) where she and her mentor Peter Maurin, the French theological-philosophical gadabout, established in 1933 the Catholic Worker newspaper, still in operation.

From that base, Day and her staff reported on racism, exploitation and a wide range of other social justice issues and preached a Christian morality rooted in a joyful selflessness and love of all people, even those labeled by society as “undeserving.”

It was also in Manhattan in the same year that Day and Maurin established the first Catholic Worker house of hospitality, a place where the Workers not only provided social services but also, more important, lived with those they served, a place where the dignity of each person was a bedrock principle, as was a communitarian way of living in which everything was held in common.  And those principles are still being lived out today in more than 240 Catholic Worker communities in the world.

And it was from her Manhattan base that, for than four decades, Day and her colleagues traveled across the nation and world, giving talks to groups, large and small, about the Catholic Worker Movement and its principles — and getting arrested over and over again in protests against unfair labor practices, nuclear arms, war and other crusades.

In fact, Dorothy Day: Dissenting Voice of the American Century by John Loughery and Blythe Randolph opens with Day’s last arrest, this time for protesting on behalf of a farmworkers strike, in August, 1973, when she was 75.  Day, a Catholic convert who is now under consideration by the Roman Catholic Church to be named an official saint, died five years later at a Worker house in New York City.

Day was a New Yorker.  But, little known to many people, she was, before that, a Chicagoan — in her formative teenage years and, later, at perhaps the lowest point in her life, when, at the age of 21, she underwent an abortion, an act that brought her great guilt and shame and led to two suicide attempts.

Loughery and Randolph relate that Day was eight when her father, a racetrack reporter, moved his wife and four children to Chicago to search for a new job, one he eventually found at the Inter-Ocean. 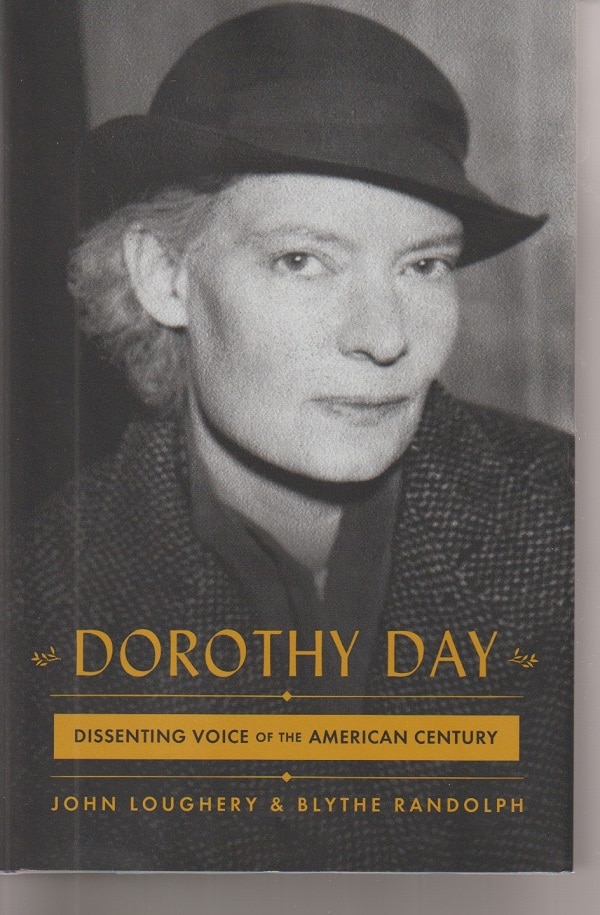 It was in Chicago that Day, the daughter of irreligious parents, first met Catholics and talked with Catholic friends about the faith, including the idea of saints and martyrdom.  Loughery and Randolph write:

“Dorothy felt a ‘lofty enthusiasm’ for the ‘high endeavor’ of suffering for a holy cause, believing in something that mattered more than one’s own life, being one of the sacred elect.”

That didn’t last long.  Nonetheless, when Day was twelve, she obtained from her parents permission to become an Episcopalian at the Church of Our Savior at 530 W. Fullerton Parkway.  She particularly liked the music at the Sunday services:

“I had never heard anything so beautiful as the Benedicte and the Te Deum.”

“Not to be undone in the face of squalor”

Although school wasn’t very interesting for her, Day read widely in her teens, particularly Jack London and Upton Sinclair.  With London, she had a special attachment to his newly published semi-autobiographical novel Martin Eden (1909) which, her biographers write, is “about the awakening of a young indigent sailor to the fact that his life need not be the one assigned to him at birth, despite the hold that class distinctions and class consciousness exert over modern America.”

Even more, she was riveted by Sinclair’s new muckraking novel The Jungle (1906), which tracked an endless series of catastrophes, injustices and brutalities inflicted on a Lithuanian immigrant family in a neighborhood not far from where her family lived.

She later recalled that she would put her brother John in his baby carriage and, with her younger sister Della, walk for miles along “interminable gray streets, fascinating in their dreary sameness, past tavern after tavern.”  Nonetheless, she also wrote of the strong aromas of those walks, “the one beauty in those drab streets…the odor of geranium leaves, tomato plants, marigolds; the smell of lumber, tar, of roasting coffee.”  Loughery and Randolph add:

“A lifelong effort not to be entirely undone in the face of squalor had already started.”

Day was about to turn seventeen when, as a scholarship freshman, she took the train from Chicago to the University of Illinois at Urbana-Champaign.  Here, she lived close to the bone, exhibiting “an emerging ascetic streak,” according to her biographers:

“A striking aspect of Dorothy’s personality, even in adolescence, was the obstinate pride she took in the fact that she could endure so much and get by on so little.”

Still, she met friends with whom she could discuss literature, ideas and politics, but, after her sophomore year, left the school in 1918 to join her family which had just moved to New York.

Day spent her twenties in Manhattan heavily involved various socialist periodicals and groups, deeply engrossed with a panoply of artists, writers and intellectuals and intensely engaged in a rowdy night life of drinking men under the table and sleeping around.  One of her paramours, according her biographers, was Eugene O’Neill although they note Day always asserted their relationship was chaste.

“Bleeding on the table”

O’Neill wasn’t the man who got her pregnant.  That was a peripatetic newspaperman, Lionel Moise, an abusive lover — one of a string of weak, unkind, egocentric and/or erratic men to whom Day attached herself.

Riding a Chicago el once with Day, for instance, Moise grew upset to see her reading a book he disapproved of, A Portrait of the Artist by James Joyce.  So, he grabbed it and tossed it out of the window.  When she told him she was pregnant, he said he loved her but wanted nothing to do with a baby.

Throughout the rest of her life, Day was very circumspect about her abortion although, in her semi-autobiographical novel The Eleventh Virgin, her central character undergoes the procedure.  From a pastiche of various sources, including the novel, Loughery and Randolph describe what happened.

Newly returned to Chicago, following after Moise, the pregnant Day was sent by friends to Ben Reitman — “fat, dirty and furtive,” she recalled — a doctor who had been a longtime figure in local radical politics as the former lover of Emma Goldman and the victim of a mob of vigilantes.

“The problem was that, at almost three hundred pounds, he was himself a less-than-hygienic person, and there were some who wondered if he had actually graduated from medical school.  His medical practice catered almost exclusively to prostitutes and women with venereal disease.  Promiscuous, bisexual, and self-aggrandizing, he had three things to recommend him:  availability, cheap rates, and experience in performing many abortions…

“He was quick and insensitive, [Day] felt; he left her bleeding on the table…”

No one more radical

Afterwards, Day feared she might never again be able to conceive.  However, seven years later, as the result of an affair with an aimless lover who wanted nothing to do with her growing Catholic faith, Day gave birth to a daughter, Tamar Teresa Day.

This occurs about halfway through Dorothy Day: Dissenting Voice of the American Century, just before he meets Peter Maurin.  The second half of the book details their work with the Catholic Worker Movement and newspaper, angering many conservatives and inspiring progressive Catholics and other radicals.

Day turned out to be a far-from-perfect mother, someone who failed to devout enough time, attention and love to her daughter.  This, it appears, was a result of what made her such a looming presence on the American scene for so long.

Day was steel-backboned and steely-eyed.  She was stubborn in her principles and willing to sacrifice comforts in creating her Worker communities, serving the neediest and challenging the hypocrisy of Catholic and U.S. leaders on social issues.

No one was more radical than she was.

The right hated her for ranting about wealth, privilege and self-satisfaction — and for portraying herself as a Catholic following the witness of Jesus.  The left couldn’t understand how this iconoclast could go to Mass regularly, pray the rosary and listen — and follow — what the leaders of her church taught about such issues as premarital sex and birth control.

Not, however, when cardinals and bishops soft-pedaled the Jesus message about loving the poor.

For her, loving the poor — loving everyone — was the core message of Catholicism, Christianity and any life worth living.  On that, she was a fierce prophet who would stand up to anyone.

This review initially appeared at Third Coast Review on 5.28.20.