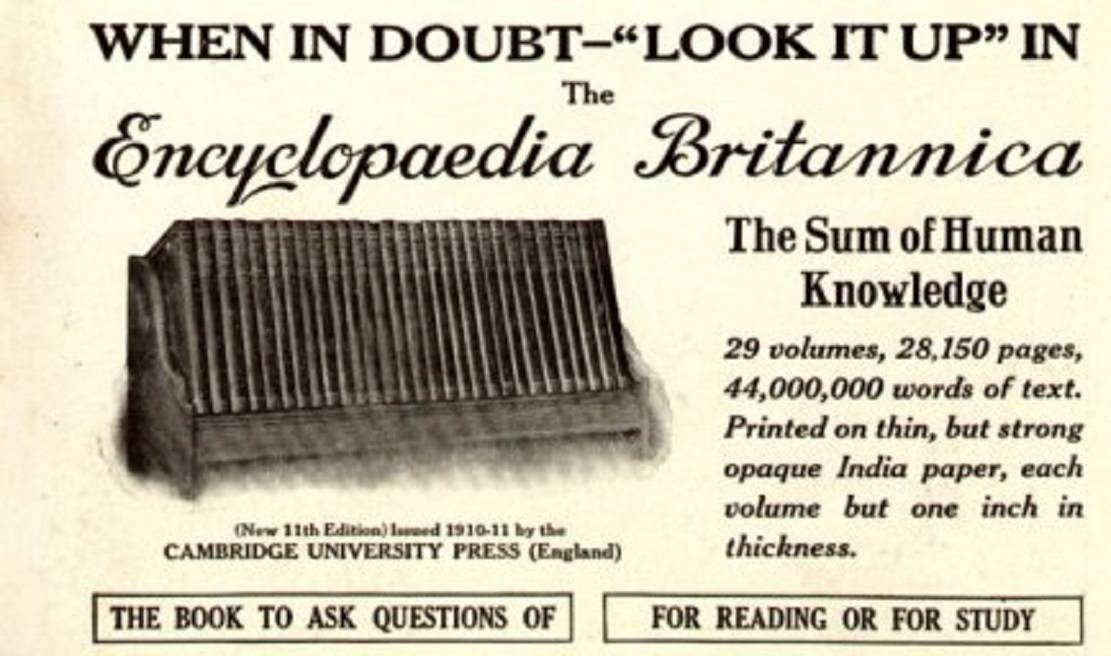 Book review: “Everything Explained That Is Explainable: On the Creation of the Encyclopaedia Britannica’s Celebrated Eleventh Edition, 1910-1911” by Denis Boyles

Knopf had a great manuscript on its hands from Denis Boyles, but how to market it?

The solution was a book cover and title that were tantalizing in their seeming quaintness. The jacket is a sober red with images at the left side and right corners to give the appearance of the physical front of an old book. The text fonts are sober, but not too sober, as befit a title that hints at something not quite evident: Everything Explained That Is Explainable: On the Creation of the Encyclopaedia Britannica’s Celebrated Eleventh Edition, 1910-1911.

The combination of the title and cover skate right to the edge of implying a book that would be terribly boring, but those words Everything Explained push the possible book-buyer in the other direction.

We live in an age when attempts are made all the time to try to explain everything, but they never succeed. In our era, everything is in flux, and our understanding of everything is tentative. Is it good to be skinny or bad? How does the economy work? Whence Donald Trump? Whither democracy?

The Boyles book is packaged in the hope that it will intrigue a potential reader — that it will create enough of an itch of interest to lead that individual to open the book and glance at a page or two.

Because Everything Explained That Is Explainable is NOT a book about the creation of a reference work.

I mean: Of course, it is. But that’s not really what Boyles is writing about.

His book is a delightfully knowing and sympathetic look at a moment in time that is both foreign and familiar to anyone living at the dawn of the 21st century — the world of intellectual Britain and commercial America a century ago.

It’s a story of characters, from both sides of the Atlantic, who seem to have stepped directly out of an undiscovered upper-class Dickens novel. It’s the tale of an age when science and scientific thinking seemed to be reforming life into something more rational and more perfect. And it is a celebration of a spirit that was full of hope, certainty and a rock-bottom belief in progress.

At the dawn of the 20th century, Chicagoan Horace Everett Hooper had the dream of publishing various editions of the Encyclopaedia Britannica and using the Times of London to promote them. The idea was to reap a windfall of profits for the just-about-bankrupt newspaper and for himself — but also to spread the combined wisdom and knowledge of the English-speaking nations across the globe. To the great benefit of the unwashed billions who hadn’t seen the light of British-American revelation.

For Hooper, it made sense, writes Boyles, “because of their emblematic value — the Times as the active mind of the English-speaking world, and the Britannica as the repository of the accumulated wisdom of that world.”

Both publications — the daily newspaper and the weighty reference work — were viewed with the highest of respect and even awe. Boyles writes:

The Times, at the peak of its influence, was influential the way the Bible is influential. Even if you didn’t read it or believe everything in it, you couldn’t possible pretend it didn’t matter, at least if you were a sophisticated person engaged in the world.

A relatively restrained ad for the Eleventh Edition.

Hooper shocked Great Britain and many of the readers of the Times with his jarringly loud and relentless marketing campaigns in the pages — often, full pages — of the newspaper, flogging the out-of-date Ninth Edition of the encyclopedia, an updated Tenth Edition (rooted deeply in the Ninth) and, finally, the all-new Eleventh which “became so widely accepted as the ultimate authority on all things — an authority that stretched over generations and to a certain extent endures today.”

Indeed, the 44 million words of the 40,000 entries in the now out-of-copyright Eleventh form a key infrastructure for Wikipedia.

Within the newspaper itself, Hooper’s American ways rankled, such as among the many “older employees of the Times…who had been doing their jobs faithlessly and badly for decades.” Even the owner of the paper, who benefited greatly, was irritated, Boyles writes, at “those vulgar Americans and their constant, noisy making of money.”

One of the noisiest of the Americans — in print, at least — was Hooper’s top ad writer Henry R. Haxton who, if he were living today, would have been pumped full of drugs to combat what appears to have been attention deficit disorder and a bipolar personality. Back then, though, Haxton wrote and wrote and wrote the sort of over-caffeinated ad copy that Britons had never before laid eyes on. Boyles describe the ad man’s initial startling presentation for the Ninth Edition:

Haxton filled the single page with five thousand words of ad copy…The sentences had a surreal architecture to them; Haxton’s labyrinthine corridors took readers past India’s northern frontier district and into thirteenth-century China, with pauses for Andre Lang’s love of ghosts, Sir William Jackson’s visits with Hottentots and Hindus, and a call out to his friend Robert Louis Stevenson. If James Joyce had sold encyclopedias, this is how he’d have done it, with one thing leading to another and another and another until the coin — actually, a guinea, please — dropped.

Often in Everything Explained, Boyles lets Haxton’s words run on and on and on.

If the book has a fault, it’s that Boyles will quote paragraphs upon paragraphs from Haxton and many other characters. But, upon consideration, I don’t think it’s a fault. These people wrote colorfully, with an erudition, sprightliness and, often, unveiled snobbery that’s isn’t on display in this age of carefully calibrated sound-bites.

Haxton is the great quote machine, but so is F. Harcourt Kitchin, “an ambitious young Oxford graduate with an interest in finance and a disapproving word for all those he felt beneath him, which was a large number.” So is just about anyone who appears in the book’s pages.

Her fantasy of a bomb

Boyles himself is no slouch when it comes to colorful writing. Consider his description of the British jurist who was hearing a court case involving Hooper:

Mr. Justice Darling was Charles John Darling, a delicate, untalented, fifty-eight-year-old judge who longed to look down his nose at others but, because he was thimble sized, required judicial furniture to do so…[The New York Times wrote:]”‘Mr. Darling…is…small in stature, juvenile in appearance, a dandy in his dress, and addicted to strong adjectives.”…[Darling’s] chief judicial strength was a ready catalog of not-bad one-liners he used to draw attentive journalists to his courtroom and cheer what to him appeared to be the dull business of a court of law.

Here’s how Boyles describes a career decision by Janet Hogarth:

After more than a decade as the first female clerk hired by the Bank of England, where she amused herself by regarding her coworkers as “psychological instances,” Hogarth finally realized one day that her fantasy that “a bomb would explode and wreck the Bank” meant that she should think about making a change.

Hogarth came to the Britannica where she was a high-level editor, overseeing, among other things, the 500,000 entries in the index of the Eleventh Edition. Later, in retirement, she wrote a handful of lively and vibrant memoirs about the work and, especially, the people she worked with there.

“A form of secular belief”

The world that the Eleventh Edition sought to capture and display was much like ours a century later inasmuch as it was one in which rapid and rattling change had taken place and was continuing to take place.

Unlike today, though, the intellectual, political and social leaders felt — really believed — they could ride these waves of changes and even control them. “The nineteenth century had been shaped by scientific discovery and the rise of scientism as a form of secular belief — as a transcendent view of existence,” writes Boyles. “The Eleventh would serve as the book of the acts of the scientists of the age.”

Much had been discovered about the globe which was “quickly shedding the mystery of places unknown.” But, in addition to detailing these formerly empty places on the map, the Eleventh also sought to include a YOU-ARE-HERE element.

The Eleventh Edition was edited the way small-town newspapers were edited: not just the grand cities of the world, but every small hamlet gets its name in Britannica. Mankato, Minnesota, and Superior, Wisconsin, get full-blown articles, but even Mankato, Kansas, and Superior Nebraska, are in the index and on the beautiful maps, their little dots no doubt making easier the job of the encyclopedia’s salesmen working in the hinterlands.

Not surprising, the similarly sized places in non-English-reading areas of the globe were less likely to get an article or even a dot.

As with any good reference work, the Eleventh was filled not only with the expected but also with the sort of stuff a reader didn’t know he or she wanted to know.

Sandwiched between the anodyne entry for “Abortion” and Stanley Arthur Cook’s elegant and engaging article on Abraham is “Abracadabra,” complete in a paragraph that includes not only its Gnostic origins and its pejorative use “by the early opponents of the evolution theory…,” but also the instructions on how to fabricate a Gnostic amulet two different ways.

“Adultery” lacks excitement and is a disappointment, but it backs into Haxton’s characteristically animated article on “Advertisement,”…an example of effervescent, pedagogical harassment not far removed in style from the ads used to sell the encyclopedia itself.

Hugh Chisholm, the editor in chief of the Eleventh — which, in the end, was published in conjunction with Cambridge University, not the Times of London — “felt strongly that every article should be the beginning of a line of inquiry, not an end in itself,” writes Boyles.

His goal was to create a 29-volume work with many millions of words by thousands of writers that would be essentially a single book with a consistent point of view and basis in common assumptions. And, writes Boyles, he succeeded:

The Eleventh has a personality that can’t be easily overlooked; it’s plausible, reasonable, unruffled, often reserved, completely authoritative. It makes no apologies for its point of view; indeed, it doesn’t seem to realize it even has one.

And the Eleventh was nothing if not optimistic.

To most of those living and working in the English-speaking world — and definitely for readers of the Britannica — the outlook was for continued rosiness…{T]he ongoing story of civilization had been reduced to working out some of the technical problems associated with quotidian existence — how to make trains run faster, telescopes see farther, limbs heal quicker.

It was a golden moment in its way. A time of high hope and expectation. And the Eleventh captures that moment — not just within its tens of thousands of entries and millions of words, but in the thing itself.

There is great hubris in attempting to corral the world and fit it between the covers of even 29 volumes.

To do so was to take another step on the road to Progress, which is to say, perfection. Yet, even as the Eleventh was published, storm clouds were rolling in as the leaders from one end of Europe to the other played with an explosive mixture of ambition, glory and pride that they thought they could control.

And to all that that meant about hope and glory and pride and science and belief and certainty and Progress.