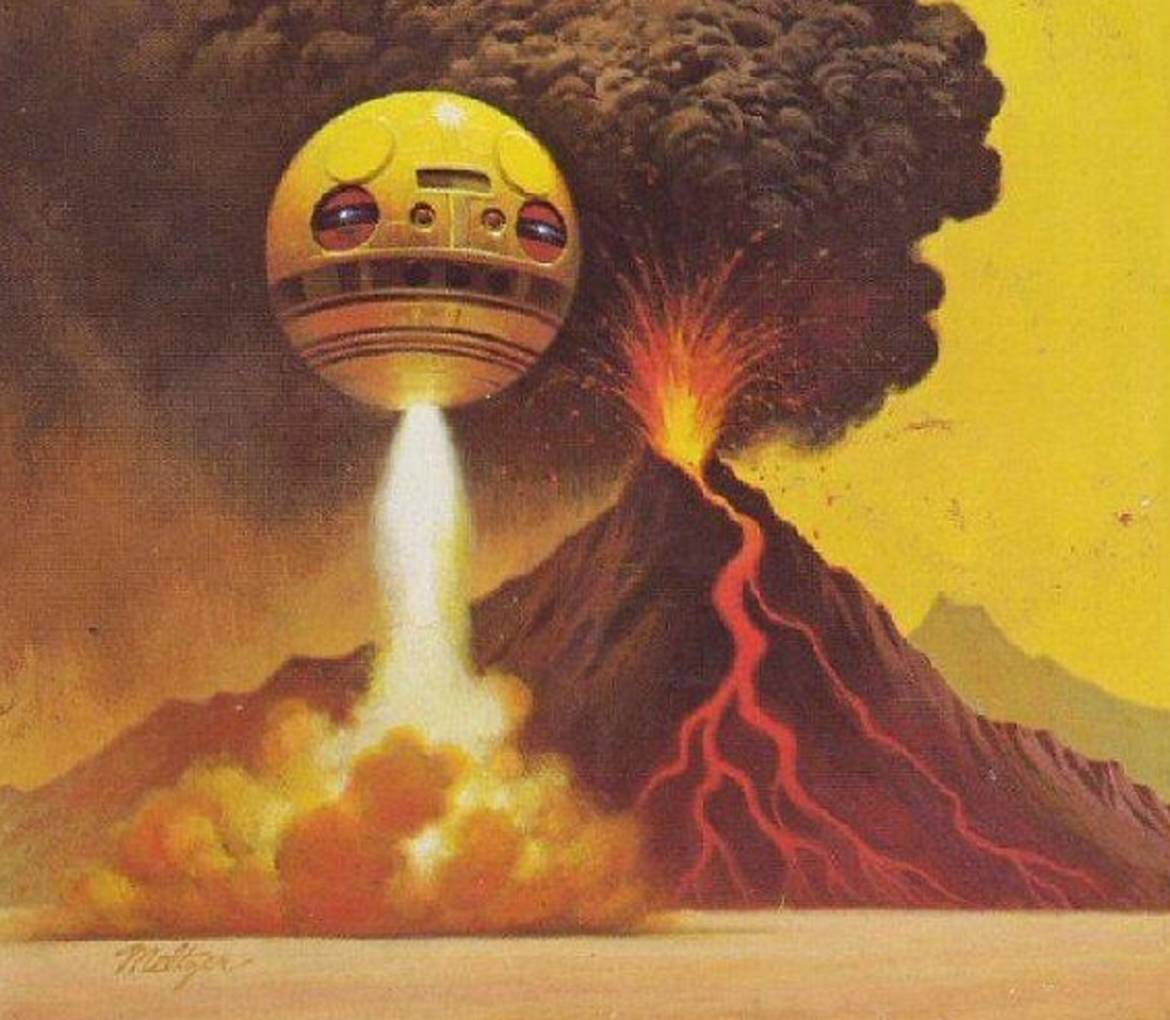 Previous item Book review: “You Suck: A... Next item Signing (and selling)...

Galactic Derelict, published in 1959, is the second in a series of Andre Norton novels that began a year earlier with Time Traders.

After stumbling onto a long-lost alien technology that permits time travel, two groups of humans — the Reds (i.e., the Soviet Union), originally, and then the United States, trying to catch up — endeavor to go into the past in a search for other scientific miracles.

In order to fit in, the Americans masquerade as traders. It’s not clear how the Reds present themselves, and, by the end of the first novel, it doesn’t matter since they’ve gotten their comeuppance from a group of aliens that are discovered lurking thousands of years ago.

Galactic Derelict, set in the late 1970s, starts off immediately after the first book and centers on a large ball-like space ship that’s found 12,000 years back in time in what is now the arid stretches of the American Southwest. All those thousands of years ago, however, the land is a lush green place where sabretooth tigers and huge mammoths are threats, as are some primitive humans.

The plan is to set up machinery to send the entire ship back to the late 1970s, but, as everything is being readied, the land is shaken by a series of earthquakes. The time transfer takes place, but, at the same moment, the automatic controls of the craft send it off into space — the space, not of the past, but of the present day. Inside are four Americans — Ashe, Murdock, Travis and Renfry — trapped on a runaway space ship they can’t control.

The bulk of the novel follows the four as the ship’s auto pilot brings them to stops at two worlds before finally coming to what the humans figure out must be its home planet. The question, then, is whether they can figure out a way to get back to Earth.

The visits to three worlds gives Norton an opportunity to create a variety of inventively imagined, often colorful alien races — although, of course, on their worlds, they’re not aliens. It’s the humans who are the weird and foreign intruders.

In this novel, Andre Norton is in the early wave of science-fiction writers who are seriously thinking about how odd and unlike humans the intelligent life on another planet might be.

In this, she both succeeds and stumbled.

She stumbles in the simplistic way she equates the physical features of another race, particularly its smell, with its moral qualities — its good-ness or bad-ness.

For instance, the humans find a clump of hair of a creature on one world:

Ashe held on his palm the tuft of hair and the odor rising from it was not only noticeable in the usual scentless atmosphere of the ship, but penetrating in its foulness.

The inference here is that any creature whose hair smell so “foul” would have to be evil.

At another point, the humans come across what might be a den of the “weasel-faced” creatures, and it’s “rank.” Here, the inference is that, if a lair smells bad and if the being that lives there has the face of a weasel, well, it must be a threat.

In each case, the bad-smell species does turn out to be a danger, but that’s neither here nor there in terms of Norton’s imagination. She believes that smell will indicate benevolence or malignancy, and it just doesn’t work.

The aromas of dishes from a culture that isn’t mine may initially turn me off. But, if I try that odd Russian dish or Korean dish or Indian dish, I may find that the food tastes good.

Oddness does not equal bad-ness.

“Neither aggressive nor a danger”

When the humans come across some flying beings who seem to have something of the insect, bird and mammal to them, they are attracted:

It was impossible to read any expression in those stalked eyes, a brilliant blue. But none of the four Terrans felt any repulsion or alarm as they had upon their encounter with the nocturnal desert people. Whatever the flyer was, they could not believe that it was either aggressive or a possible danger to them.

Later, they will note that these flyers have an “alien but not inoffensive odor.”   Hence, they must be OK.

That’s not true on Earth. Here’s a link to a list of 14 beautiful but deadly flowers. What could be safer than a pretty flower? Well, these 14 aren’t safe.

“What makes their minds tick”

Even with this failing, Norton succeeds in Galactic Derelict in thinking about other intelligent races because the novel is filled with questions.

Ashe says to his Travis, “I wouldn’t kill — until I know what I was killing.”

For a moment, Travis did not understand, and then the meaning of the rather ambiguous statement sank in. How could they be sure that the prey was not — man? Or man’s equivalent here?

Trying to figure out whether to deal with one sort of creature, Murdock says the humans may be entering a trap. To which, Travis responds:

“That’s just guessing. How can we tell what makes their minds tick? We don’t even know what they are.”

The humans must deal with technology they don’t understand. On one planet, they confront machinery that they are tempted to tinker with, but hold off because it might result in the explosion of a building and the deaths of the natives who live there. Ashe says:

“Break it open and they’re just as dead as if we mowed them down with blasters.

“They may not be anything or anybody we’d care to live with, but this is their world and we’re intruders.”

Norton may get it wrong when she equates smell with good-ness or bad-ness. But, on a much deeper level, she’s operating on an important moral basis.

We humans aren’t in charge just because we show up.

This is a lesson that would have benefited many human nations and empires throughout history that gave not a thought to the natives into whose world they were intruding.