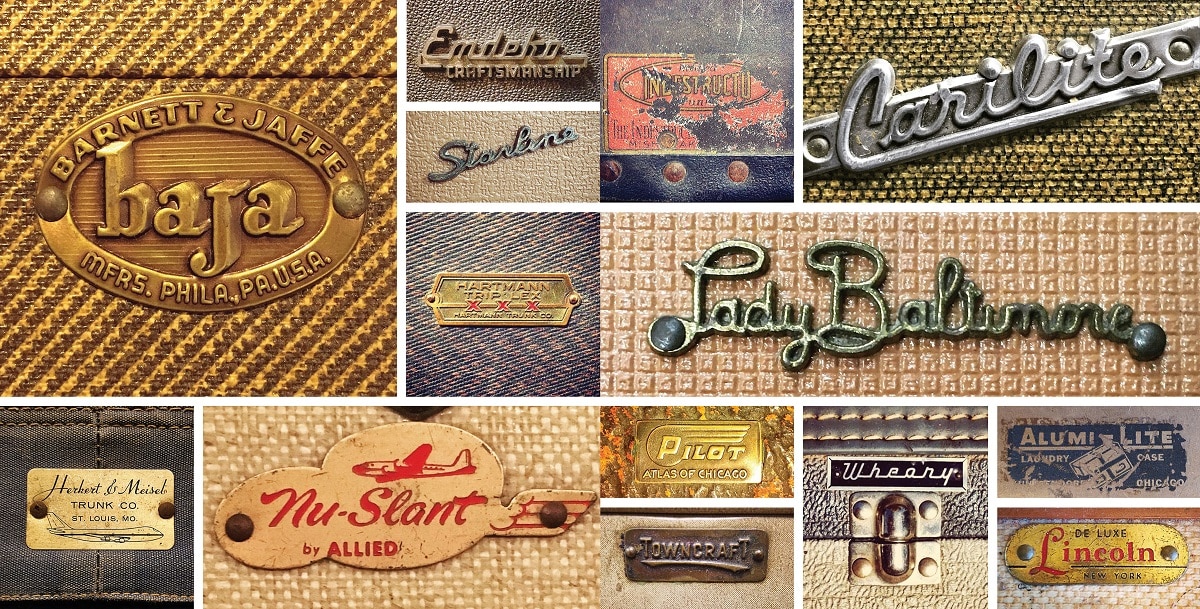 Junk Type: Typography, Lettering, Badges, Logos is an odd book that’s oddly compelling. True, you might look at it and think that it is of absolutely no interest for you, and you’d be wrong.

Pick it up, and I’ll bet you can’t stop paging through its 300 images of what might be called industrial typography. There, that’s a term that’s likely to drive you away from the book, but it simply means the company logos and other identifications of one sort or another that are printed on or stamped on or bolted into the sides, tops or bottoms of products ranging from oil cans to fuses, from chewing tobacco to typewriters, from radio tubes to needles to nails to shoe polish to car polish to fans to ball bearings to, well, on and on and on.

What makes Junk Type enchanting and delightful is that it is a collection of images that comprise in their humble yet colorful way a low-key visual epic poem about America of the 20th century.

That’s not how Rose, a professional photographer, describes his book in his very short foreword. For him, it’s “striking typography” that he began photographing wherever he could find it in and around Minneapolis and then throughout the country. He put it on his website, got a lot of followers and then a publisher.

For Mike Essl, an associate professor of graphic design at the Cooper Union and writer of a similarly short introduction, Junk Type is “an archive of small ideas” that are available as examples and inspirations to people today who are creating logos and other such signage.

Both are right, of course, but they’re hindered by their status as specialists.

For you or for me, it’s not about stealing ideas from past masters of the art of creating type to identify and sell products. For us, Junk Type is about the surprising beauty of these hundreds of tiny, ordinary works of practical art.

Rose does a great job of laying out these images. Some are given their own pages. Others are part of a one- or two-page spreads featuring multiple images. There appears to be some organizing principle behind the groupings, but it’s not readily evident which is just fine. Maybe, at least in some cases, it’s just that the colors of a group of images resonate in some deep way.

As Rose and Essl explain, most of these logos and other identifications were created manually by designers between the 1920s and the 1950s. Most are very tiny, just an inch or two wide. Rose’s skill as a photographer is evident in his ability to capture these subjects with his iPhone.

For me, the three-dimensional logos and identifiers are what stand out most.

On page 10, across from Essl’s introduction, there is the exquisitely sharp image of a metal panel for a product of Balidor Industrial Motor, bolted onto a metal surface — rust and dirt are caked around the bolt head — on which various pieces of information, such as the “CAT NO” (CM3218T) and “SPEC” (36BO2Y46) are stamped. There’s a daintily brawny artistry to this.

Elsewhere, there’s an extreme close up of a Tufboy tape measure casing that’s so clear I can almost feel the indentations in the circular swirls of the metal design and the somewhat battered screw head in the center.

For you, though, what stands out most could be the sheer exuberance of the design creativity, such as on page 117, where nine logos for a wide array of products — music, a bandage pack, and radio parts, among them — all employing a circle in distinctly different ways.

Or the interestingly inventive use of the outline of a vaguely minaret-like structure to identify “SARAKA, contains bassorin frangula, for CONSTIPATION.” (Why a minaret? Maybe it has to do with the mysterious ingredients.)

I called this book “a low-key visual epic poem” above because, self-effacing as it is, Junk Type contains a concentrated dose of American life, not just in the 20th century but today as well — the ebullient pride of the makers of these products and, in a mirror-like way, the enthusiasm of those who purchased them.

These images are expressions of the lively excitement that is at the core of the American spirit. These products aren’t just things — they’re our things, things we made and things we own. They are, in some real way, an expression of who we are.

Book review: “Shroud for a Nightingale” by P.D. James