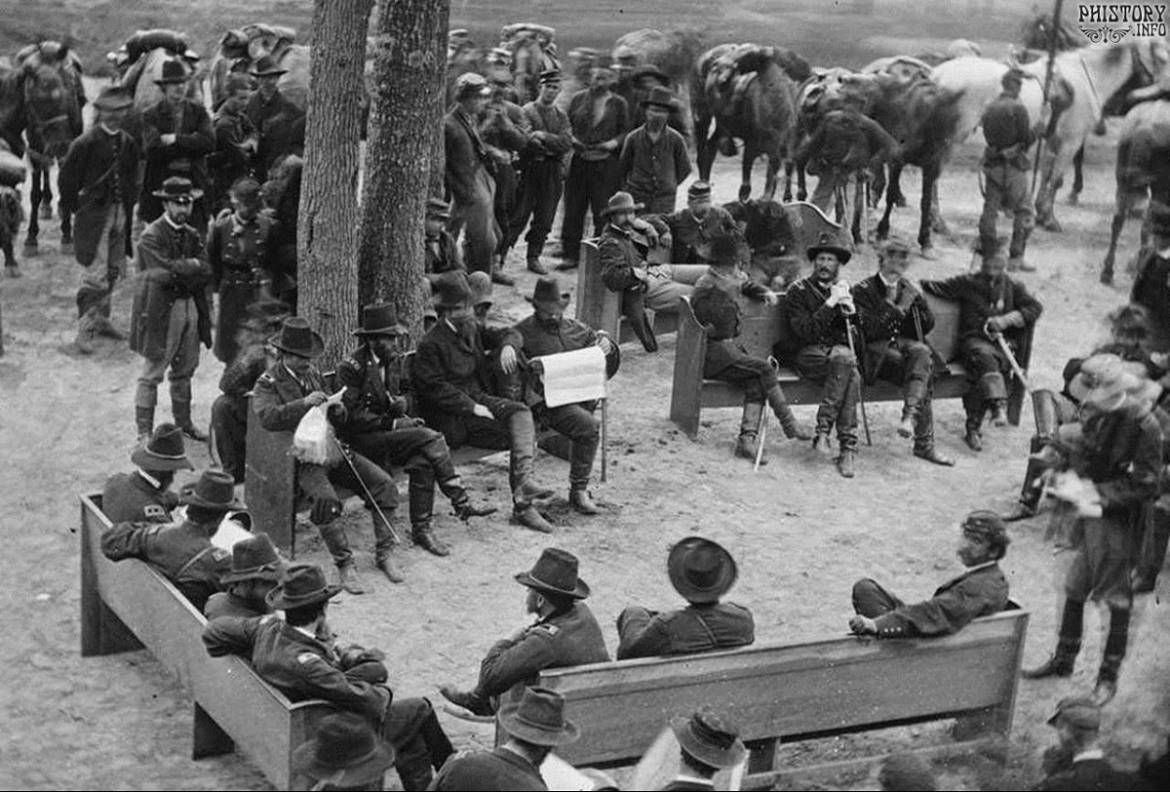 Book review: “Lincoln’s Lieutenants: The High Command of the Army of the Potomac” by Stephen W. Sears

In May, 1864, during the Battle of the Wilderness, when Ulysses S. Grant was new  in command of the Northern troops facing the Rebels of Robert E. Lee, an irate General Charles Griffin stormed into Union headquarters. Griffin complained loudly that he’d pushed back the Confederates but, getting no support, had had to retreat. Condemning by name several officers including his immediate superior, he then stomped away again.

Grant, sitting nearby, whittling and smoking, growled to General George Meade, his top aide, “Who is this Gen. Gregg? You ought to arrest him.”

Meade came over, and, noticing that Grant’s uniform coat was unbuttoned, began buttoning it up “as if he were a little boy,” an aide remembered, while also saying calmly, “It’s Griffin, not Gregg, and it’s only his way of talking.”

That’s Grant, the kind of rumpled guy just to the right of the guy reading the paper in front of the tree. Meade is over on near end of the bench in the lower left.

There is something so homey and so human about this scene which says so much about Grant and Meade and their close working relationship, focused entirely on beating the Rebels. Meade, the victor at Gettysburg, was the commander of the Army of the Potomac, and he could have sulked and moaned when, just a short time earlier, he’d been superseded by Grant. Instead, for the good of the war effort, he’d set aside his personal feelings. Grant, meanwhile, gave his full attention to winning the war, even to the point of leaving his uniform a bit disheveled and even to the point of letting Meade treat him like, well, a little brother.

When Stephen W. Sears relates this scene in Lincoln’s Lieutenants: The High Command of the Army of the Potomac, it is particularly refreshing. For hundreds of pages up to this point, his story of the top leaders of the main Union army, charged with protecting Washington, D.C., and prosecuting the war against the main Rebel forces, has been about arrogance, ineptitude, ambition, favoritism, pomposity, politicking, moral cowardice and flirtations with treason.

Much of this stink arises out of that tin general, the “Little Napoleon,” George B. McClellan, a man for whom the word “blowhard” was invented, and his coterie of toadies.

Although highly skilled at organizing an army and winning the affection of its troops, McClellan had no conception of how to use an army. Often, he left the decisions about the fighting of battles to his subordinates, being himself miles away from the fighting. As one soldier-historian of that war relates, “Curiously enough, there was almost always something for McClellan to do more important than fight his own battles.”

McClellan’s hubris is a key thread of any history of the Union armies during the Civil War, and many books note how, one night, Abraham Lincoln and an aide called on the General at his home, only to be told, after waiting a half hour, that McClellan had gone to bed. Sears, however, details how this happened not once, but at least twice.

At this point, it’s worth asking whether the world needs another book about the Civil War and about the myriad failings of Little Napoleon. The awkward title of the Sears book is an indication of the difficulty.

The title Army of the Potomac was taken by Bruce Catton for his three-volume trilogy in the 1950s. Around that same time, T. Harry Williams employed Lincoln and His Generals for one of his two books on the leading Union military men. Lincoln’s Generals was the name of the 1994 book edited by Gabor S. Boritt, featuring five essays, one written by Sears. And, since 1983, Sears himself has published four major books examining key battles fought by the Army of the Potomac as well as a full biography of McClellan.

Lincoln’s Lieutenants, however, isn’t a regurgitation of all those earlier works. It is an amazing synthesis of the stories of the battles and of the men at the many levels of the Union command from the top down to the brigade level. It’s a narrative about amazing courage and astonishing gutlessness, about well-meaning wrong-headedness and lightning-flash strategic genius. It explains why Union movements worked and, more often, didn’t work in clear-eyed explanatory prose that’s both vivid and direct. And each page tells a human story.

Consider Philip Kearny, a general whose approach to command was to lead by example. Early in the war, his left arm was shattered by grapeshot and then amputated, but that didn’t stop him, as Sears relates. Coming across a battle-stunned, officer-less company of New Jersey soldiers, he shouted, “Well, I am a one-armed Jersey son-of-a-gun, follow me! Three cheers!”

Taking over command of a division, he decided he needed to make an impression on his new troops so “he rushed out to the skirmish line, drew the Rebels fire (losing two of his staff killed), and rode back into his lines shouting, ‘You see, my boys where to fire!’ ” He bragged to a colleague, “General, I can make men follow me to Hell!”

During one battle, though, he was alone and lost near dark when he came upon a group of soldiers who turned out to be Rebels. Sears writes that, spurring his horse, Kearny crouched “low in the saddle. There was a barrage of shots, and a bullet struck him at the base of his spine and coursed through his body and killed him instantly.”

“The storm of bullets”

Such courage, even in its foolhardiness at times, was striking among the Union commanders, and, yet, any officer who approached the front lines knew he was putting himself in harm’s way — and so did their loved ones.

What’s extraordinary for a reader today are the letters that these soldiers sent back to their wives and families describing battle with a gusto and attention to detail that’s downright astounding. For instance, five days after Fredericksburg, General Andrew A. Humphreys write home to his wife:

“I felt gloriously, and as the storm of bullets whistled around me, and as the shells and shrapnel burst close to me in every direction scattering with hissing sound their fragments and bullets, the excitement grew more glorious still. Oh, it was sublime!”

Later, as Meade’s chief of staff, he wrote home this little scene:

“A shell thrown from a battery of the enemy on our flank…had passed between Genl. Meade & myself, had taken off a small part of the tail of my horse…grazed heavily Genl. Meade’s boot close to the knee, passed between Genl. Griffin & Genl. Bartlett, burying itself in the ground five feet behind them & covering them and their staff with dirt. It did not explode.”

Not that the Union officers were all just standing around. Most, like Kearny, were at the front of their troops, and many paid the price. During a single month of the Wilderness Campaign, the Army lost 30 of its 41 brigade commanders, and, at the regimental level, the carnage was even worse.

John Gibbon, who eventually rose to lead a Corps, wrote in his memoirs about such losses and how they were disastrous for the Northern forces. It wasn’t just that new untested commanders had to be brought in to replace those lost. It was, he wrote, that “the very best officers, and the very bravest men were those who fell. These always remained in the ranks and did the fighting and by their example and spirit stimulated the rest.”

It was a war of attrition, one that, for much of the conflict, the Union was losing because its leaders permitted Lee and other Rebel generals to create makeshift fortifications for their troops before most battles, forcing the Union soldiers to charge unprotected against waves of bullets.

It was this reality of the war that crippled McClellan as a warrior.

In 1862, after the Battle of Seven Pines, the commanding general saw the battlefield covered in dead and wounded, the first and only time he was present to see such carnage. And he was shaken to his core. Sears writes:

“His revulsion at the bloody arithmetic of battle pointed to something deep-rooted in his military character — a reluctance to accept the human toll necessarily expended by a commander to win a battle or a campaign. As he put it in another letter, ‘Every poor fellow that is killed or wounded almost haunts me!’…”

At that point, the question was whether, like his subordinates, McClellan would have the “moral courage” to accept the responsibility to expend the lives of his soldiers to win victory. He never did.

Indeed, after a later battle, one of his aides wrote that, because his forces were having success in one portion of the field, “he was afraid to risk the day by an attack” on another area as well.

“ ‘Afraid to risk’” — an epigraph for the generalship of George McClellan…in his own words.”

This review initially appeared in the Chicago Tribune on 4.30.17.