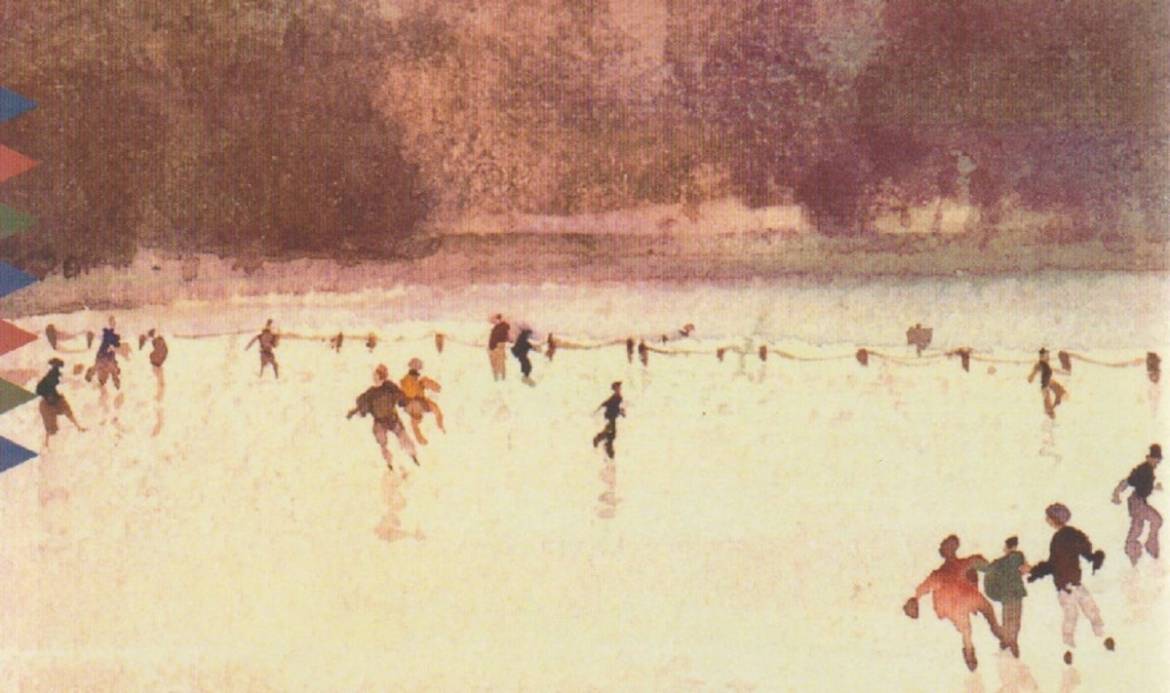 Willa Cather was a writer of frontier novels in which Nature — the landscape, the weather, the seasons — is a major character, frequently set in contrast with the big city, usually Chicago.

So it is with Lucy Gayheart, written in 1935, as I  discuss in a separate post. Yet, something else is at play here as well.

When she wrote the novel, Cather had just turned 60 and was in tune with the zeitgeist that, shortly, would produce the works of Jean-Paul Sartre and Albert Camus. In her homey yet subtle way, she tapped into the modern loss of faith.

And she created an existential novel.

A romance, a feminist story

It doesn’t seem that way at the beginning. Indeed, Lucy Gayheart appears to be nothing more than a confection of a romance.

Lucy is the bright, lively, musical girl, a stand-out among her young adult peers in the small Nebraska town of Haverford where Harry Gordon, the banker’s son, is the most eligible bachelor. They seem made for each other as they skate together on the Platte River in the novel’s opening scene. They have always seemed made for each other.

But Lucy wants a career and has been working in Chicago. She becomes the piano accompanist to a much older classical singer, Clement Sebastian. The two fall in love in a chaste way, just as Harry sweeps into town and, with ham-handed arrogance, tells Lucy that it’s about time for them to get married, right? Wrong.

Then, the book seems to be on its way to becoming a feminist Horatio Alger story in which the plucky heroine will find her way to beauty (and maybe love) in the stratospheric Olympus of the high arts.

But, out of the blue, Sebastian drowns in an Italian lake, and Lucy is thrown into a swoon. She returns to Haverford and realizes that Harry is really her true love, and has always been.

The problem, however, is that Harry’s married a plain heiress and will have nothing to do with Lucy. Lucy pines. But, then, a letter gives her a reprieve. In just a short time, she’ll be able to return to Chicago and take up music again. She’ll forget Harry and get on with her life.

She chafes, though, at the wait, argues with her sister and stomps off to skate on the Platte to take her mind off her worries. She doesn’t realize, however, that the ice is thin. It cracks under her. She holds onto the edge and then slips away. She drowns.

Harry, who always loved her, despite the cold shoulder he gave her, spends the rest of his life coming to terms with regret at how he failed to help her in a last crucial moment.

That summary doesn’t do justice to Cather’s artistry, but it’s enough to give the sense of how a reader of her time would have experienced the story as the pages turned.

In her novels, Nature was always this huge and unavoidable fact of life or act of God that humans could not dream of controlling. The weather and the seasons happened to you. You were simply the recipient of their whims, for bad and for good.

True, the landscape could be modified by farms and towns and even the big city. This, though, was superficial. Nature happens without regard to human wishes.

In Lucy Gayheart, something bigger than Nature shapes the fates of Lucy, Harry and Sebastian. Call it Life.

These characters are born into Life and make their plans and, for a time, seem to be in control of their destiny.

One aspect is the difficulty of knowing what anyone else is thinking and wanting — and also the difficulty in knowing what you want. Harry is dense in proposing to Lucy. She is blind to the impact that her false story — that she has “gone all the way” with Sebastian — will have on Harry.

Both are blind to what they really want until it’s too late.

Bumping into things in the dark

OK, so that happens to all of us. We live and learn — at least, a little bit; at least, some of the time.

The sadness at the heart of Lucy Gayheart is about how we stumble through our lives, bumping into things in the dark, and then we die.

And all for what?

Lucy and Harry are only thin memories in the minds of those they once lived with, fading away as time and age and death take their toll.