Mostly Harmless — the 5th and sort-of final installment in the series of books by Douglas Adams that he started with A Hitchhiker’s Guide to the Galaxy — is mostly OK.

I mean, for me, the book, published in 1992, was mildly interesting.  Its arid stretches — when I found myself reading one word after the other because, well, that’s the only way to get from here to there — were mostly harmless.  I never threw the book across the room.

As the many, many, many Douglas Adams fans out there in the world can see right away, I am not one of them.  I wish I’d found this book as interesting as they apparently do.

The fault is mine, I’m sure.

First of all, I read the book under false pretenses.  I’d believed that (a) I’d vaguely heard that Adams had written a book together with either Terry Pratchett or Neil Gaiman, and that (b), at some point in the distant past, I’d read the first book in the series, the Guide. 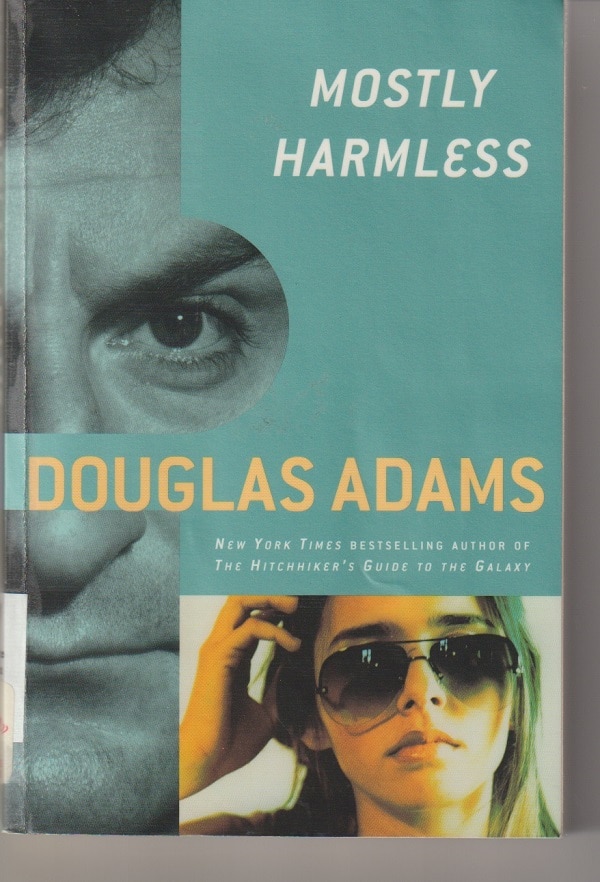 Well, to go last first, I come to discover, upon reading Mostly Harmless, that, well, no, I probably never read the Guide but only — get ready for the heresy! — saw the movie (which was entertaining). I generally know the difference between having read a book and having seen a movie but not, apparently, in this case.

Reading Mostly Harmless as a non-Guide person, I realized that there was probably a lot of stuff in the first four books — a sixth was written by someone else several years after Adams’ death — that would have enriched my reading experience.  I’m just guessing here.

As for the other thing — Pratchett and Gaiman, of course, wrote Good Omens together which I have read, twice.  Neither of them is Adams, but I think that, somewhere in the recesses of my brain, I got to thinking that Adams did a similar dual authorship with one or the other.  I was wrong.

For the last 20 years or so, I’ve been enjoying the part of speculative fiction in which humor is a key element, whether the subgenre is science-fiction or fantasy or whatever.

I go into all this because, when I was a reporter with the Chicago Tribune, I got a chance to interview Gaiman in 1999 and Pratchett in 2000.  Those were fun interviews.

I quickly got the sense that these two were at the top of the humorous speculative fiction ladder, and I also got the impression that Adams was just a smidge below them.

In any case, I fell in love with Pratchett’s writing, and I’ve read all of his 40-plus Discworld books, many more than once.  I find Gaiman is a good storyteller but not as compelling as Pratchett.

Adams, for me — at least after reading this one book of his (which, for the record, has to do with time travel and space travel and, it seems, Big Ideas) — isn’t in their class.

Be that as it may, I own a couple other Adams books so I will give him another try.  I may even get a copy of the Guide and maybe start at the start.

I’m thinking that his writing and his books are an acquired taste, one that I can actually acquire.