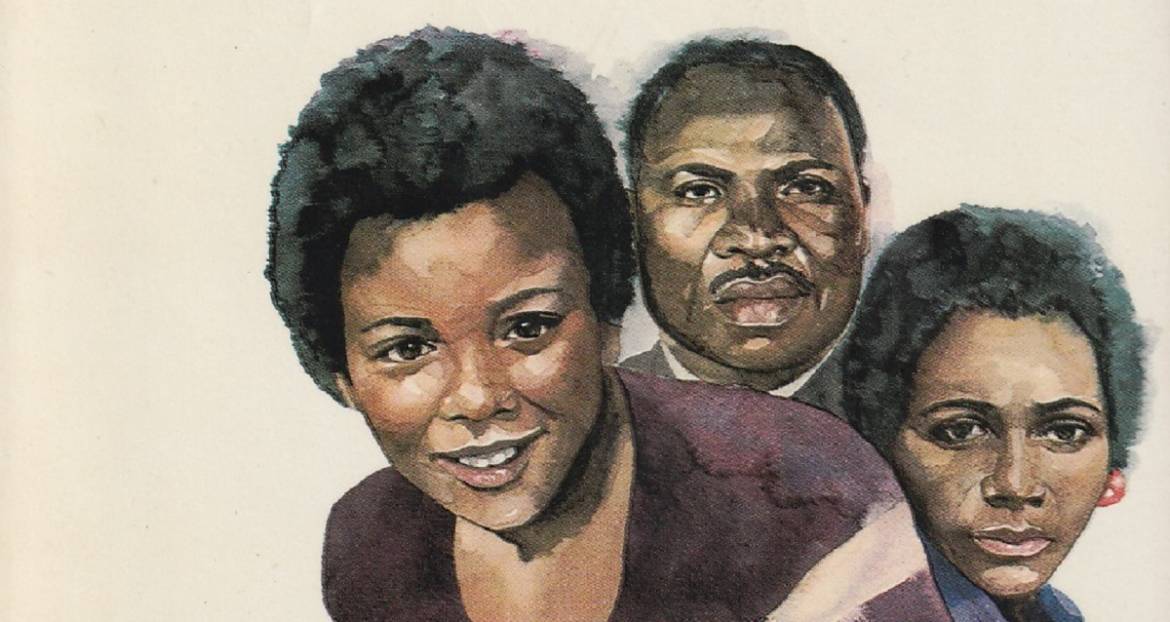 Previous item Book Review: “The Pusher”... Next item Book review: “Eye of the...

“He has beaten up Jimmy for years, so that Jimmy stutters badly and his left arm doesn’t work very well, because years ago Mr. Madden broke it.  It was never set properly, and healed crooked.”

More central to the plot is an African-American lawyer named William Sheridan Sr. who thinks its silly that his 11-year-old daughter wants to become an attorney:

She thought again of her father looking like a rock, not just a rock, but a huge boulder, a mountainous expanse of rock settled into the land, never moving.

It pleases him because he can go on seeing me the way he wants to see me, he doesn’t have to change any ideas he has.  He thinks women don’t have good enough minds to be lawyers.  He’s said so.  He tells stories about women lawyers in court and he laughs at them.  My mother laughs too.

One parent who leaves his son with a crooked arm.  Another who is experienced by his daughter as a huge boulder, unmoving and unmovable.  Fitzhugh’s title is Nobody’s Family Is Going to Change, but it could have easily been: Nobody’s Parents Are Going to Change.

Like all great young adult novels, Fitzhugh’s book is deeply subversive.  It’s a book that many a parent would find terribly offensive and fit to be banned.

It does, after all, go to the heart of the power dynamic of families.  The fathers and the mothers rule the roost, and the children are expected to follow orders — for their own good. And, in Fitzhugh’s telling, it leaves the children as an oppressed people, shunted and shaped at the whims of parents.

The kids in Fitzhugh’s novel, all living in Manhattan, range in age from seven to 15, and none has a good parent.  Each child or teenager has a complaint to lodge like Jimmy with the crooked arm and Mr. Sheridan’s daughter who’s told she’s silly for wanting to be a lawyer.

Is Fitzhugh falsifying the situation of children by failing to show parents who are better in tune with their children?  Yes, to an extent.  She’s exaggerating the problem by highlighting parents who are pompous, violent, demeaning and closed-minded when it comes to the desires of their children.

Yet, in fact, the power dynamic is still present in any family.  A child or a teen has to listen to their parent.  A parent may be fully attentive to the wants and needs that a child expresses, but, ultimately, that parent will make choices for the youngster.

Even in the best of cases, this pinches.  It pinches less when the child feels heard by the parent, especially if the parent responds authentically to the child’s ideas — but it still pinches.

Childhood is a time when a human being doesn’t have control of their life, pure and simple.

So, Fitzhugh’s Nobody’s Family is Going to Change will resonate with children, pre-teens and teens because they know the reality of being within the control of a parent, even if that control is light and tender.

Similarly, kids and teens will recognize the difficulties that such control can cause, even though the two primary examples in the book — Mr. Sheridan’s daughter Emma (Emancipation) and his seven-year-old son Willie (William Jr.) — are rooted in their time in American cultural history.

Emma’s desire to be a lawyer and not to marry and not to be stuck with kids at home won’t sound very outlandish today.  After all, female lawyers now sit on the U.S. Supreme Court. One, Hillary Clinton, served as U.S. Secretary of State, and another, Kamala Harris, is the U.S. Vice President.

But, nearly half a century ago, when Fitzhugh wrote her novel, it was quite ordinary for male attorneys such as Emma’s father to belittle any female with the temerity to seek a position at the bar.

While Emma is refusing in the novel to aspire to “women’s work,” Willie has no interest in following in his lawyer father’s footsteps nor in playing sports.  His one wish is to be a dancer — and he’s good enough to score a job dancing on Broadway.

But, as Willie’s uncle Dipsey says to Ginny, his sister and the mother of the two children,

“You know and I know and even Little Willie knows that William thinks Dancing Is Sissy!”

Again, 2021 is light years away from 1974 when gay people — adults and children — kept their gayness hidden.  Fitzhugh herself was a quiet lesbian who, as far as her readers of the time knew, at least as far as her publisher communicated, was simply a single woman.

Nonetheless, many of those readers — those who were gay — were able to see themselves in her quirky characters and her subversive books, particularly her 1964 bestseller Harriet the Spy.

“What difference would it make?”

That’s true, as well, in Nobody’s Family Is Going to Change in which the characters are so interested in breaking all sorts of expectations, despite the strictures of their parents, that, well, of course, refusing to abide by sexual expectations would part of the quest for some.

In fact, the children in Fitzhugh’s book are rethinking their own attitudes about homosexuality, such as when Emma is asked by a group of friends whether Willie’s “a sissy”:

“Then I think your father ought to be stopped.”  Goldin spoke very definitely.

“Suppose” — everybody looked at Ketchum when she spoke — “suppose he were a sissy.  What difference would it make?”

Emma felt even guiltier, for having called Willie a faggot.

One friend says, if Willie were gay, his father would want to stop him being one, but another says that wouldn’t work.  Nothing could change her brother who likes to wear dresses.

“I think” — they all looked at Ketchum again — “I think that whatever a person is, that’s what he is, and a person wants to be the way he is.”

I’m afraid that all of this heady stuff is making Nobody’s Family Is Going to Change sound as dull as an academic treatise.  Nothing could be further from the truth.

As the central character, Emma is wonderfully curious and flawed, the antithesis of the perfect little girl that many parents think they want.

You could say she’s more than a bit odd, but aren’t we all?

For instance, she’s in the bathroom, seated on the toilet, looking at herself in the mirror on the door, and says, “Blech.”  She’s just had a spat with Willie.

Before she flushed, she examined her productions with earnest horror.  “I guess his have ribbons on them,” she said as she flushed enthusiastically.

“The King of the Period”

Emma is new to menstruation and doesn’t like it. Alone in her father’s office, she’s paging through a medical dictionary and comes across a reference to the absence of menstruation.

She read on: Physiologic amenorrhea occurs before the menarche [Who is he? The King? The King of the Period?], after menopause [The pause that men take?], during pregnancy and lactation [I have so many lacks that now I have a severe case of lactation?].

Like every 11-year-old, Emma is a mix of knowledge and ignorance, of confidence and trepidation.

She doesn’t take herself too seriously.  But she does take seriously what she wants and doesn’t want out of life.

And, after reading Nobody’s Family Is Going to Change, I’m certain that, if Emancipation Sheridan were a real person, at this moment today, when she’d be 58, she’d be sitting on the U.S. Supreme Court.

Or maybe she’d be President.