There is the maddening mystery at the heart of Joan Lindsay’s 1967 novel Picnic at Hanging Rock — the disappearance of three teen girls and a teacher during a school trip to the rugged, drastic, looming monolith Hanging Rock in a remote part of Australia.

It takes place on Valentine’s Day, 1900, during an outing by 20 students from Appleyard College, a private boarding school for upper-class girls near Mount Macedon, Victoria.  And it looms over the 196 pages of Lindsay’s story.

But there are a host of other mysteries to tantalize the reader, and they have tantalized readers for more than half a century:

And those are only the mysteries that come to mind.  I’m sure there are myriad others I’m overlooking at the moment.

So many puzzles unexplained

Picnic at Hanging Rock is a pyramid of puzzles.  Or, better put, a central puzzle contained in a setting of other puzzles, like a literary piece of jewelry.

In the course of the novel, some of these puzzles are solved.  But not all.  Not by a long shot.

A novel that leaves so many puzzles, large and small, unsolved, unexplained, runs the risk of frustrating readers.  Lindsay dodged that problem by crafting Picnic at Hanging Rock as a work less interested in plot than in atmospherics.

Indeed, the sheer everydayness of much of her storytelling — the newspaper clippings, the police interview transcripts, the clearly delineated and almost hyper-real descriptions of characters and their clothing — occurs in sharp contrast to the miasmic haziness that dominates the book.

Consider 14-year-old Edith, the acknowledged school dunce who in her oblivious self-centeredness is one of the most vibrant of Lindsay’s characters.

As the three senior girls search for and follow paths up the monolith, she tags along, constantly complaining until she gives up and, after a solo trip down, comes bursting out of the scrub, “crying and laughing and with her dress torn to ribbons” and remembering nothing about why she returned alone.

True to her nature, Edith whines even before leaving for the walk, even while still at the picnic ground, complaining about “how dreadfully quiet it is out here.”  She goes on:

“Except for those people over there with the wagonette we might be the only living creatures in the whole world,” said Edith, airily dismissing the entire animal kingdom at one stroke.

That’s Edith’s way. But Lindsay’s next sentences suggest that it’s not only Edith who is blind to the presence — and power — of Nature:

The sunny slopes and shadowed forest, to Edith so still and silent, were actually teeming with unheard rustlings and twitterings, scufflings, scratchings, the light brush of unseen wings.  Leaves, flowers and grasses glowed and trembled under the canopy of light; cloud shadows gave way to golden motes dancing above the pool where water beetles skimmed and darted.

On the rocks and grass the diligent ants were crossing miniature Saharas of dry sand, jungles of seeding grass, in the never ending task of collecting and storing food.  Here, scattered about amongst the mountainous human shapes were Heaven-sent crumbs, caraway seeds, a shred of crystalized ginger — strange, exotic but recognizably edible loot.  A battalion of sugar ants, almost bent in half with the effort, were laboriously dragging a piece of icing off the cake toward some subterranean larder dangerously situated within inches of Blanche’s yellow head, pillowed on a rock.

Lizards basked on the hottest stones, a lumbering armour-plated beetle rolled over in the dry leaves and lay helplessly kicking on its back; fat white grubs and flat grey woodlice preferred the dank security of layers of rotting bark.  Torpid snakes lay coiled in their secret holes awaiting the twilight hour when they would come sliding from hollow logs to drink at the creek, while in the hidden depths of the scrub the birds waited for the heat of the day to pass…

That’s a long description of the fecundity of life taking place in front of and literally under the noses of the picnickers but totally missed by those self-absorbed “mountainous human shapes.”

The message is that there is more to life, more to the Universe, than what these picnickers — and all other humans — are able to recognize at any given moment.

The world of existence, this passage suggests, is much wider, deeper, taller and richer than people recognize.

That’s enough to give the reader cause.

Even more, though, this wider, deeper, taller and richer world is, in many ways, foreboding.  The ants much go about their “never ending task.” The battalion of sugar ants must maneuver the danger posed by Blanche’s head.  The grubs and woodlice opt for “the dank security” of the rotting bark.  And one armored-up beetle finds itself upside down and “helplessly kicking on its back.”

The message here is that the world is filled with threat. 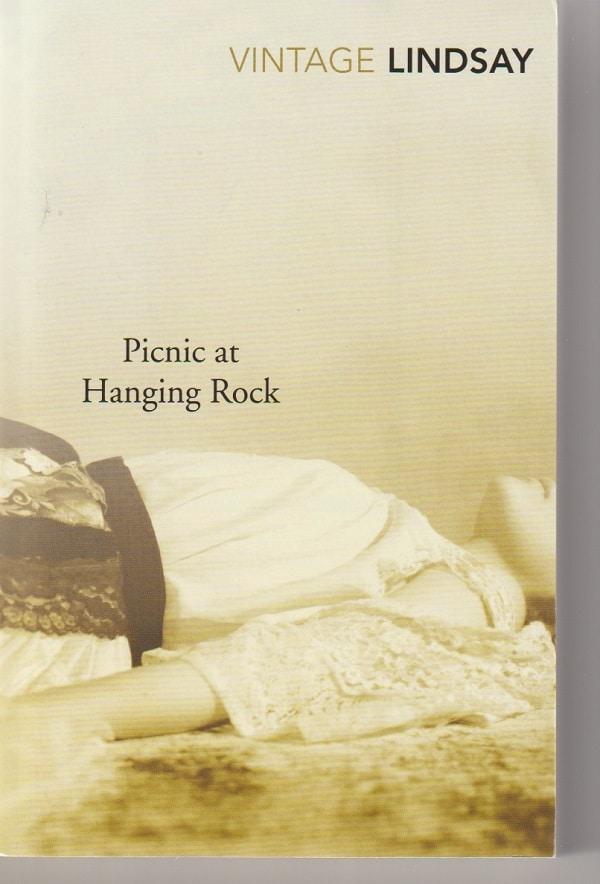 This is a message that’s repeated later when Mike is wandering the face of Hanging Rock in search of the missing girls and teacher.  The threat on this occasion is from him:

Fronds of curled brown velvet snapped under his touch, his boots trod down the neat abodes of ants and spiders: his hand brushing against a streamer of bark dislodged a writhing colony of caterpillars in thick fur coats, brutally exposed to midday light.  From a loose stone, a sleeping lizard awoke and darted to safety at the clumping monster’s approach.

The rise grew steeper, the undergrowth denser. The gentle youth, hard breathing, his yellow crest damp on his glistening forehead, pushed on through the waist-high bracken, with every step cutting a swathe of death and destruction through the dusty green.

Again, this is a passage about the perilousness of life — the abodes of ants and spiders crushed by Mike’s boots, the fronds broken by his hands, the caterpillars “brutally exposed to midday light” and the “swathe of death and destruction” wrought by the “clumping monster,” a young man who thinks of himself and is seen by others as a man who is gentle.

The mysteries of human life

The ants and the caterpillars and the lizard recognize their danger, but they don’t understand why it is suddenly upon them.  It is a mystery to them.  Mike could explain to another person why he is doing what he’s doing, but not to the ants, caterpillars and lizard.

The message here is that, just as the caterpillars don’t know why Mike is doing what he’s doing, human beings can’t understand everything that occurs to them in this world. In other words, it’s a puzzle why the three girls and their teacher have disappeared, and one that maynot have a solution

The long-lived success of Picnic at Hanging Rock, I think, is rooted in these layers of mystery.

The caterpillars don’t expect an explanation of all the things that happen to them, and I think that Lindsay is suggesting that the characters who people her novel — and the readers of her novel — have to live with similar mysteries.

It seems to me that this is why generations of readers have read Lindsay’s novel and found great enjoyment in it — despite the fact that many puzzles, large and small, are not solved.

And the message of nature — that there is more there than meets the eye, and that much of it is hazardous — is echoed in the way the strange event at Hanging Rock has ramifications, good and bad, for many characters over the next 40 days.

Two marriages take place, and one does not.  A vigorous life is found by one character, and a horse is bought by another, and a third loses the love of her life.

Two people die in a fire, a child is murdered, a woman commits suicide.

None of this would have happened if the picnickers had never left on Valentine’s Day for the outing at Hanging Rock. Each of these events can be explained, sort of, as following from the disappearance of the three girls and their teacher.

But why would so many lives be changed so radically simply because of what four people did on a drowsy summer afternoon?

That’s the deeper mystery of Picnic at Hanging Rock, and that’s the true subject of Lindsay’s book.

This is the second review I’ve written about Picnic at Hanging Rock.  The review I wrote when I read the book the first time in 2019 can be found here.