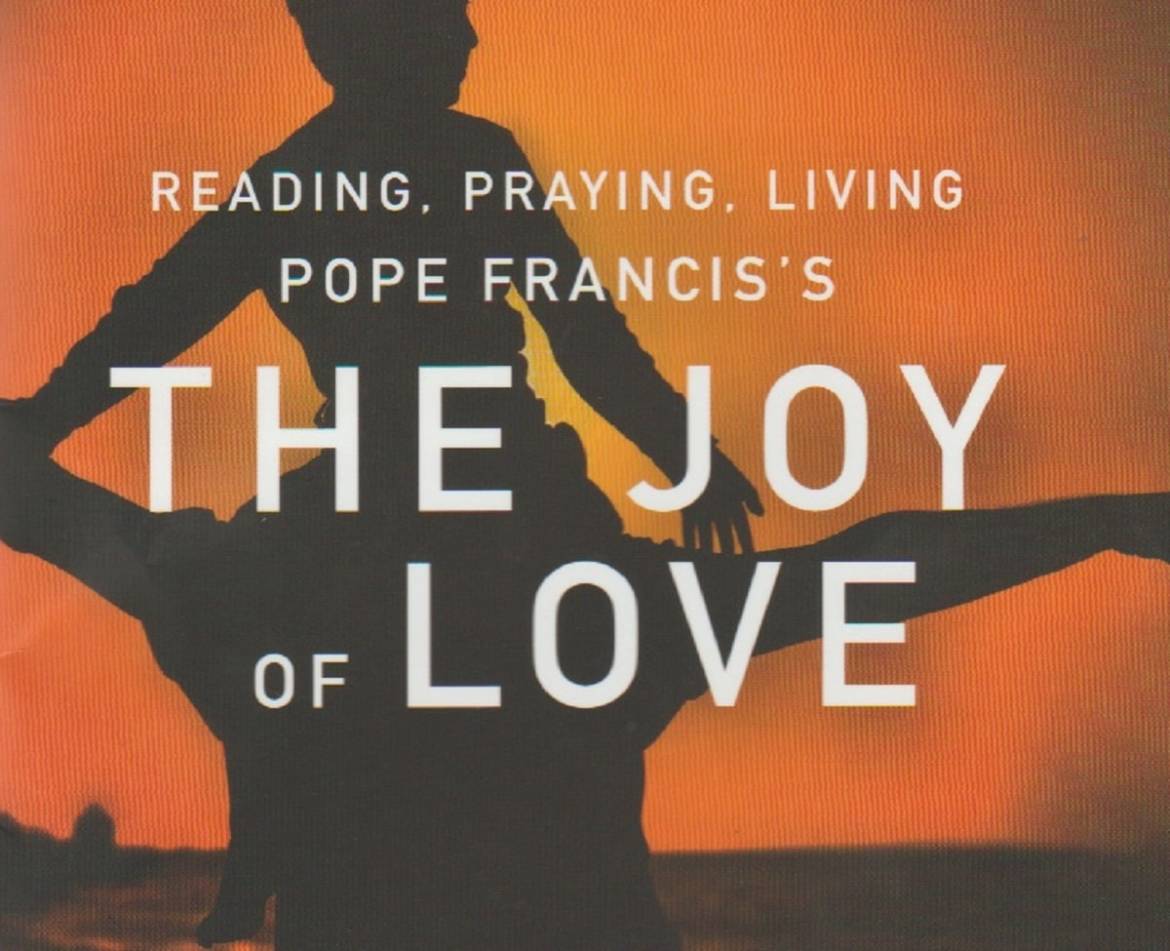 A year ago, Pope Francis published his apostolic exhortation on marriage and families, Joy of Love (Amoris laetitia), which, at about 60,000 words, is believed to be the longest papal document ever written.

It would be difficult to find any papal document written with the beauty, simplicity, gusto and accessibility that Francis brings to the task. Nonetheless, Joy of Love is no simple read. It wrestles with important and complex theological ideas in ways that are refreshingly and, for some, unsettlingly, innovative.

It’s good to have a guide, and that’s what Julie Hanlon Rubio, an ethicist at St. Louis University, provides with her newly published Reading, Praying, Living Pope Francis’s “The Joy of Love”: A Faith Formation Guide,” from Liturgical Press.

And the bottom line — if I can jump ahead to the final page of her text — is this:

What Francis offers is beauty with plenty of weeds.

That may seem so cryptic as to be useless, but bear with me.

Rubio, who is speaking on the Pope’s exhortation on Wednesday at 7 pm at Dominican University in River Forest, writes this in summarizing the Pope’s analysis of marriage in the context of Catholic beliefs. And what Francis is saying, in essence, is that a well-lived Catholic marriage is filled with joy and pain.

Throughout Reading, Praying, Living, Rubio highlights the contrast between the mainstream secular idea of marriage being a question of finding “the one” and then living happily ever after and the Pope’s countercultural understanding, rooted deeply in Catholic faith and tradition, that it’s a question of two partners choosing to be in a mutually loving relationship for the rest of their lives.

The problem with seeking “the one” is that it’s based on the false idea that perfection is possible. Everything may be bliss at the beginning, but what happens later when the partners don’t see eye to eye, or when the partners get bored with each other, or when life throws the couple a curve ball.

Then the relationship doesn’t seem so perfect, and then it can seem that the next step is simply to walk away and try to find a better “one.”

“Great worth of a human being”

That isn’t the idea of marriage that Francis has. Instead, he writes that it is “a love that never gives up,” an intimate friendship, a “reciprocity, intimacy, warmth, stability and…a shared life.”

It needs to be seen, Rubio notes, “in the context of a loving lifelong relationship,” one that is fruitful maybe in children but certainly in a love that extends out from the couple into the world and to others. She writes:

[I]n the Catholic vision of sex, eros (desire) is good and always linked to agape (self-giving love). The both-and is important….[P]assionate desire fits in the framework of loving, lifelong relationships.

Francis, Rubio notes, doesn’t write about eros in marriage as “pleasure” or “happiness,” but rather “joy.” The Pope asserts:

Marital joy can be experienced even amid sorrow; it involves accepting that marriage is an inevitable mixture of enjoyment and struggles, tensions and repose, pain and relief, satisfaction and longings, annoyances and pleasures.

“Most of her life as a single mother”

And sorrow is sure to come. And the relationship is sure to mellow and evolve in ways that won’t always be fun. Rubio frames it this way:

The pope is not unaware of the very real problems even the happiest married couples ordinarily face but he insists that even when marriage is not thrilling; when a partner is annoying, unattractive, or sick; when it seems that maybe you married the wrong person, “Love opens our eyes and enables us to see, beyond all else, the great worth of a human being.”

Indeed, Francis notes that the difficulties of married people and family life are on full display in the Bible. Rubio writes that he “calls attention to the presence of, shall we say, problems in the families portrayed in the Bible. There is no way to talk about ‘the biblical family’ without acknowledging biblical family sins such as adultery, rape, murder, abuse, betrayal, and domination.”

She notes that the Holy Family was broken and irregular in ways that families today will recognize:

Mary found herself pregnant while betrothed, Joseph stood by her but tradition suggests he died before Jesus reached adulthood, Mary spent most of her life as a single mother, and Jesus never married.

Jesus’s lack of a wife may not seem like much today, but, in his time, it was highly unusual for a young man not to marry.

“A culture of encounter”

Another countercultural aspect of the Pope’s understanding of marriage is that he doesn’t view the family, the couple and their home as a haven from the world.

In fact, his view is the opposite.

A well-lived marriage is one that is fruitful. Yes, that may mean children. But, even more, it means, Francis writes, that, in the strength of their love, family members “go forth from their homes in a spirit of solidarity with others.” In elaboration, Rubio writes:

So it is clear that the social mission of the family should be perceived as a call to servanthood…Listen to Pope Francis about spouses “who experience the power of love” and “know that this love is called to bind the wounds of the outcast, to foster a culture of encounter and to fight for justice.”

“Listening and walking beside”

In talking about “a culture of encounter,” Francis is weaving the Catholic idea of family and marriage into the broader fabric of the role of church members in the world, no matter whether married or single, lay or clergy.

The members of a well-lived Catholic marriage go forth in solidarity with others in the same way every other Catholic does — as Jesus did. Francis talks about this as “accompanying” others in their journey through life. Rubio explains that accompaniment means to talk with or be with:

It captures the idea that when we go to people in need, we do not pretend to have all the answers to their problems and we don’t tell them what to do with their lives. We are not there to save them. We and they have gifts to offer and things that need fixing.

We begin by listening and walking beside people, appreciating their wisdom and learning their story. We ask what they need and what we might be able to help them accomplish. We hope that our encounter will lead to needed change in our lives as well.

This runs counter to the historical stereotype of the Catholic missionary who forces native people to accept the faith hook-line-and-sinker, as well as a bunch of cultural baggage.

Yet, it doesn’t end up in relativism. It doesn’t say that Catholics who go out to encounter others are supposed to simply adapt to the thinking of those others.

Rather, it means that Catholics go out and live their faith and maintain an openness to be with others and really hear what they have to say.

The call of the Catholic as spelled out by Francis is to recognize the goodness of the Spirit “in the midst of human weakness,…not to judge or condemn,…to enter into the reality of people’s lives.

In other words, Rubio writes, “to see the complexity — all of this is what Jesus commanded us to do.”

From the start of his papacy, Francis has used the image of a field hospital to explain his idea of the church. When someone is wounded, the role of those in the field hospital isn’t to tell them how to avoid being wounded, but to treat the wound.

Francis has made it clear that, too often, priests and the hierarchy have failed to exercise mercy in this way — that they have been too focused on the ideal and perfection and haven’t been willing to recognize human weakness. Rubio writes:

For pastors, the image is a call to change the way parishes operate. For lay people, the image is an apology for past obtuseness, an assurance of mercy, and an invitation to return and be a source of mercy and healing to others.

The church, which is to say the institution and each individual Catholic, is called to treat wounds. Through The Joy of Love, Rubio notes that the Pope “gives priority to mercy….while never failing to identify the ideal to which Catholics are called.”

Rubio writes that Francis encourages couples “to embrace the daring adventure of marriage” with all its risks and difficulties — and delights.

The same could be said of what Francis has to offer to all Catholics — “beauty with plenty of weeds.”