It is one of those random moments in life.

Cate, running late, drives into Neale’s alley, puts on her blinkers and turns off the car, just as the announcer is saying, “New song by Neko Case, Right after the Weather—”

That radio is one of the myriad things in modern existence that seem to imply that the Cosmos is an orderly place — one song follows another, with the DJ patter in between, and, at regular times, a bit of news, a bit of weather.

That weather report, too, gives the sense that rain, sun, sleet, snow, howling winds and gentle breezes have a kind of order to them, enough order to make it possible to know ahead of time what’s going to happen later today, tomorrow, even ten days down the road.  And, really, if it gets cold, turn up the heat.  Hot, turn up the AC.  Make sure the sump pump in the basement is in good shape.

Even Cate’s four-wheel-drive vehicle seems to preach this gospel of life’s tidiness. In it, she can keep herself protected from the weather, like today’s snow, and she can get from here to there in minutes.  She can move through Chicago, huge as it is, independent, isolated, cushioned.

But, then, Cate enters the backdoor of her friend’s home and finds herself walking into a scene in which all the controls of modern society have been exploded. Two home invaders have scattered Neale’s groceries across the kitchen floor where she has been spread-eagled, beaten and kicked and is about to be raped.

Cate grabs the only thing near at hand — a fire extinguisher — and, without a plan, without even thinking really, she acts.

The idea of plans frames Carol Anshaw’s deeply felt and disturbingly everyday new novel Right after the Weather, set in and around Andersonville.

Early on, the 42-year-old Cate is unsure about a budding romance with an affluent and aggressive girlfriend, Maureen, but tells Neale, her straight friend from childhood,  “I think she’s my best shot at making something more than another pile of tinder. Something to live in, not set fire to.”  She thinks of this as Plan C, and Anshaw, one of Chicago’s premier novelists, explains:

“She didn’t really have a Plan A.  Plan B was using her MFA to get a tenure-track teaching job.  But by then she was doing sets for Adam Pryor and thought settling into academe would pull her off the artistic path.”

That would have worked fine.  Pryor was a highly praised director who liked to have Cate as his set designer.  But, then — in a random moment on Michigan Avenue — an elderly woman’s car jumped the curb and killed him.

For the most part, Right after the Weather is told from the point of view of Cate who feels adrift in her forties and fears turning into a lonely fifty-ish lesbian obsessed with gluten and adding new cats — old cats — to her household. 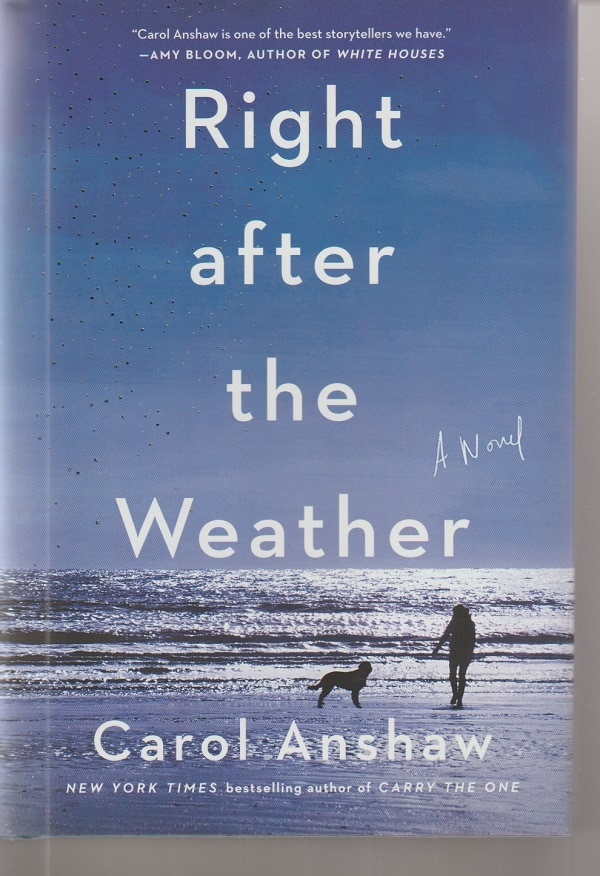 She’s arty in a highly competent but, alas, unprofitable way.  Her credit cards are full-up, and she’s still taking handouts, guiltily, from her divorced parents who are arty in a profitable way.  Nonetheless, Cate has a clear-eyed sense of herself, a refusal to grumble and, one of the many delights of this novel, a mordant wit.

For instance, Cate sees her mother Ricky, in her sixties, as “still attractive in a slightly sharpened way” and still powerful enough in her retail design world to not lack for companionship.

“If she wants a new man, she can still pluck one from a moderately deep pond.  Jason is the latest koi.  Except for encyclopedic knowledge about flowers and plants, he is vapor.  Even his vices are recessive. He’s vaguely alcoholic.  Nothing showy or embarrassing, just that he always has a drink and, as an evening wears on, recedes farther and farther into a quiet, comfortable niche.”

The bulk of Cate’s sharp observations, though, have to do with Maureen, a well-paid costume designer who’s “totally adult.  She has investments.  There’s a financial adviser in the wings.”  As a girlfriend, she’s good in bed, funny and “beautiful in a recovered way that stirs Cate. As though she has sprung back from something difficult, but is made of denser material because of it.”

Cate realizes that, if Graham, her ex-husband and present roommate — long story — hadn’t bought her the condo, she’d be still living the her old rental apartment “with seventy-two coats of paint” and radiators that would be quiet for hours and then boom so much heat that she’d have to open windows in February.

“She has come to understand that room temperature in the demographic she aspires to is a more personally controlled business.

“Maureen inhabits this thermostatted demographic.  She owns a co-op on Marine Drive, has an Infiniti that still smells new.”

The other point of view in Anshaw’s novel — conveyed in five very short chapters in a different typeface — belongs to the six-two, 300-pound Nathan who works nights at the Citgo, lives near Neale’s home and crosses paths with Neale and Cate on Halloween.  His first words are:

“There are levels, a lot of people don’t see that.  You can live around here and still have self-respect, work a job.  Have a good lawsuit going.  But there are also people out here existing on a lower level.  They no longer make any food.  They eat tamales cold from the can.  Or dinner can be Hershey’s Kisses.  When the gas company shuts off their heat they burn wood in the old fireplace.  The flue doesn’t work right anymore, so the living room is usually filled with smoke.  And then on top of that they themselves smoke, cigarettes and weed and hash and crack and meth.  Whatever’s around.  I’m talking about Irene, of course.”

Nathan sees himself a couple levels above the increasingly gaunt Irene who is dying in slow motion.  Nonetheless, he lives in her decrepit house, sleeps in her bugged-up bed and listens to her stories about the Administrators, her personal gods, all women in secret control of the world.

“She thinks the dead have things to say to us, especially those who are dead by our hands.  I have killed one man, and it was to make an important point.  Irene has killed three people, at least that she has told me about.”

Irene has a gun.

The showdown in Neale’s kitchen, remembers by Cate in fractured flashbacks, occurs halfway through the novel, and it’s horrific in the idiosyncratic way of life.  Neale survives, one of the home invaders dies, and Cate is called a hero and a victim but doesn’t feel she fits either category.

Everything in Cate’s life is knocked ajar, particularly her interactions with her friends and lovers.  (Yes, plural.  There is a wild woman from her past, Dana, who doesn’t want to keep her distance.)  None of the questions about Cate’s future life from the first half of the book disappear in the second.  Instead, they’re more complex.

Everything shifts, a little or a lot, each character’s connection to Cate, and Cate’s connection to the world — all because of a single random act that took place in a kitchen with the groceries strewn on the floor.

In the final pages, Cate comes to understand that it isn’t worth wasting thought on Plan A, B, C or even D.

Instead, watching her dog Sailor and a heather gray horse serendipitously “make each other’s acquaintance by twitching noses in the delicate air between their faces…something pleated fans open inside her.”

Right after the Weather is a richly vibrant novel about embracing randomness in all its scariness, wonder, danger and abundance.

This review originally appeared in the Third Coast Review on 7.15.20.