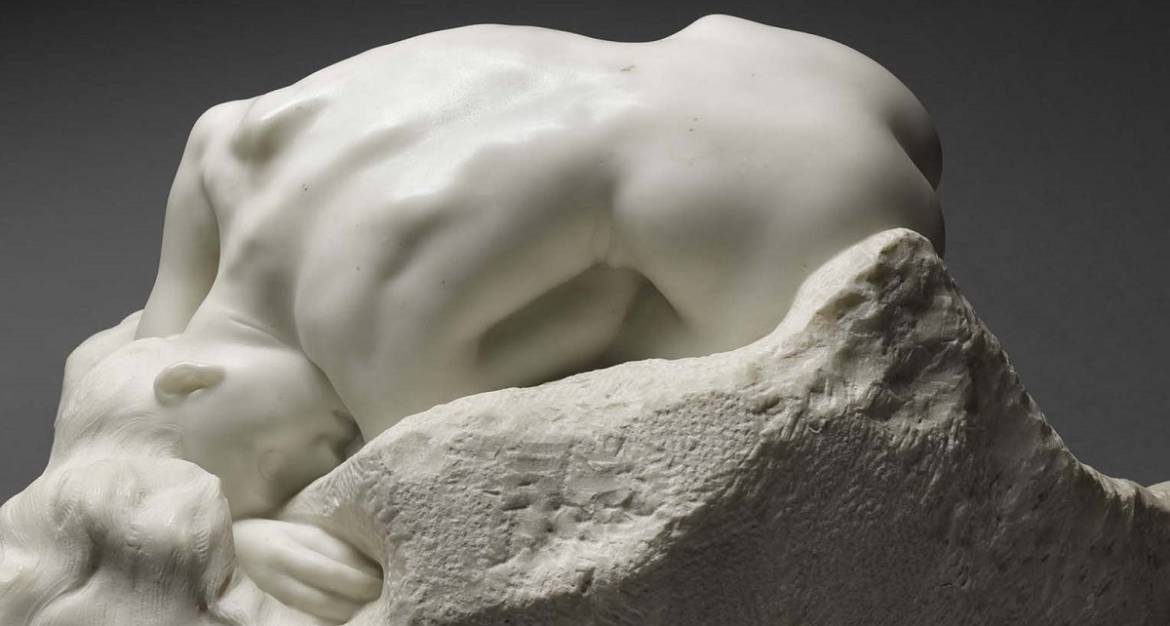 I have a key question about Rodin by Raphael Masson and Veronique Mattiussi, but, first, I need to commend the Musee Rodin and the publisher Flammarion for selecting the relatively obscure marble sculpture Danaid for the cover of the book.

Rodin is one of the artist-victims of modern pop culture — Michelangelo and Leonardo da Vinci are among the others — who have produced a piece of work that has embedded itself into the broad culture and the public mind that it becomes unseeable as  art.

Leonardo’s Mona Lisa is an example, and Michelangelo’s David. Rodin is twice victimized with The Thinker and The Kiss.

For millions of people who know nothing of art, such works have come to represent “ART” and are accorded a certain reverence that makes it nearly impossible to approach them with a fresh and open mind. In addition, the images of these works have been appropriated for billboards and t-shirts and key-rings and parodies and myriad other purposes.

They are no longer themselves. They are an accumulation of millions of messages that they have been employed to convey. Anyone attempting to see them as a work of art must fight off a bombardment of preconceptions and the reverberations of the non-artistic uses for which these works have been put into service.

Danaid doesn’t have all that baggage. It’s a small piece — about 14 inches tall, 27 inches long and 22 inches wide.

The cover image is a detail from a photograph by Herve Lewandowski that is brightly lighted. There are also four images of the work from various perspectives on pages 184-185 by Christian Baraja who employed moodier side-lighting.

I prefer the Lewandowski image because it seems to get at the essence of Rodin’s work — the beautifully articulated curves of the contorted body (the buttocks, the shoulder blades, the face, the single hand), modeled in a way that makes them appear both soft and supple. The contortion, for all its twist, appears somehow natural, and the rough, seemingly untouched stone that encases the body emphasizes the warmth of the body’s (marble) skin.

There is also, as with most of Rodin’s work, a mystery here and a challenge. This work touches something deep in the viewer.

And it doesn’t bring to mind anyone’s t-shirt.

My question about Masson and  Mattiussi’s Rodin has to do with how well it does its job.

I’m not sure if it does its job too well. Or not well enough.

This book was initially released in 2004. It’s been updated and republished to coincide with the reopening of the museum last November after a three-year renovation project.

It is filled with hundreds of beautifully executed photographs of Rodin sculptures and plaster casts as well as the artist’s sketches and watercolors. There are, in addition, historical photos of Rodin at work and at rest and of his artistic colleagues, friends and lovers, particularly the gifted sculptor Camille Claudel.

The book’s nine chapters seek to provide an overview of Rodin’s life:

My problem reading the book is that I often found myself wanting to know a lot more — wanting to know more about The Gates of Hell, about Claudel, about Rodin’s working methods and about a lot of other things.

On the one hand, is Rodin a preliminary primer to looking at the artist’s life and work? Is it a good sign that, as a reader, I’m interested in learning more — a lot more — about him?

Or, on the other hand, is the book too superficial?

Put another way: Is it my fault that I often find myself frustrated while reading it? Or is it the fault of the authors?

I am sure, though, that the authors could have done a better job in their chapter about Rodin’s sources of inspiration.

The chapter, written by Masson, trots out dance, the Far East, architecture, literature, music and women as inspirations, and each subject is given a few pages of text and images. To my mind, this seems wrong-headed. Anyone familiar with Rodin’s work can’t help but be struck by his resonance with the female body and its sexual energy.  (Males bodies, too, of course, but to a lesser extent.)

Indeed, a later chapter on the artist’s final years, written by Mattiussi, notes thatRodin was nicknamed the “great faun,” and, in describing his visit to Italy in 1914,  adds:

As his days were drawing to a close, Rodin spent almost all his time drawing, ceaselessly exploring human flesh for its splendors and deformities. His final graphic style was perfectly illustrated by the drawings he did based on his Italian model, Assunta Petricca — bodies full of health, with a lively, determined appearance …

The small section on women in the chapter on Rodin’s sources of inspiration points out that his contemporaries weren’t sure if his delight in the bodies of women was an artistic pursuit or proof that he was a dirty old man. (One critic, early in the artist’s career, complained: “Rodin now fashions nothing but fannies.”)

Masson, it seems to me, chickens out when he ends this section:

Rather than coming down on one side or other, we will simply say here that, in every case, it is clear that a constant odor di femmina was essential to the expression of Rodin’s genius.

The scent of women as well as the look and gestures and everything about women were, without question, central to Rodin’s art. Masson, even in the small space he had, should have been able to be a better defender of the artist. It seems like such a non-issue.

Rodin was no pornographer.

Despite all this, Rodin is a beautiful book, and it ranges far afield for images of Rodin’s great treasury of works.

It also provides tantalizing glimpses into how the artist saw himself and how he did his work. For instance, art critic Paul Gsell often watched the artist at work and left this description:

“His hands were extraordinarily broad with very short fingers. He kneaded the clay furiously, rolling it into balls or pellets, using both the palm and fingernails, tapping away at the clay, making it leap under his fingers, sometimes brutally, sometimes caressingly, wringing out a leg or an arm in a single gesture, or lightly brushing the flesh of a lip…. His mesmeric passes brought the clay to life.”

The German poet Rainer-Maria Rilke was one of Rodin’s many secretaries, and he once asked him how a person should live. “By working,” Rodin answered.

“I follow no working rule. My own pleasure is my only guide. I do only what interests me, and only when it suits me. Art is pleasurable; it can and must require effort, but not constraint. If a work is to turn out fine, the artist, when undertaking it, must feel a joyous and pressing need to create it.”

There is a deep insight there, I think. For Rodin’s art — and probably for all great art — there needed to be “a joyous and pressing need to create it.”

At the heart of art — joy and need.