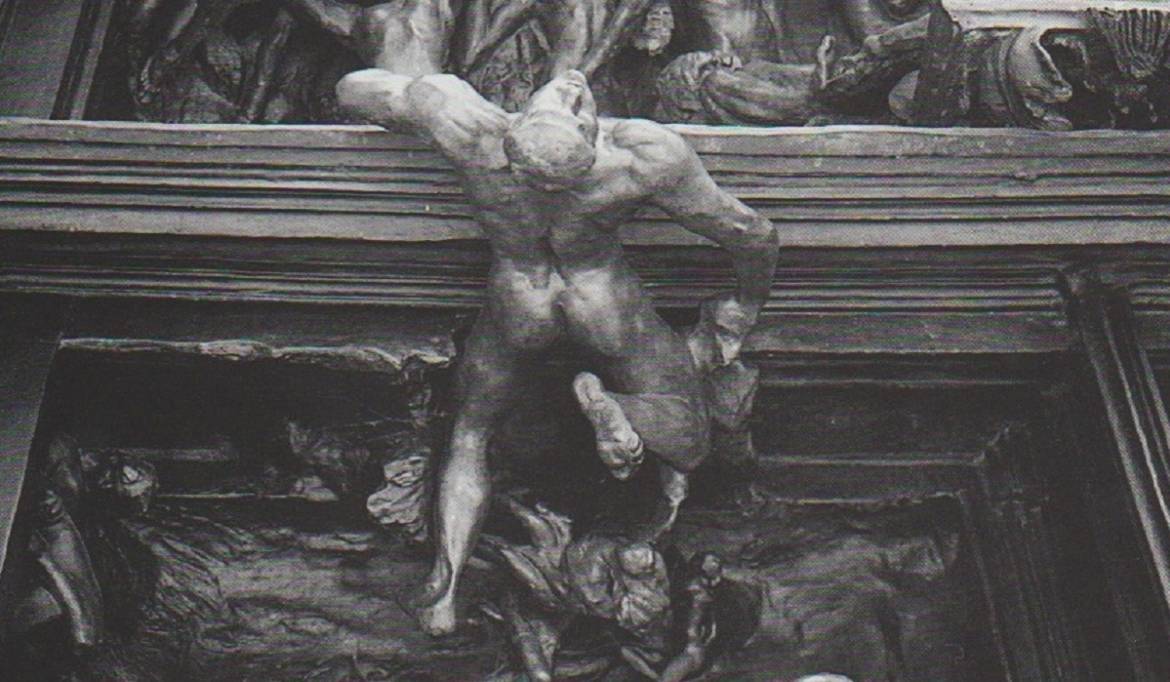 I’m fascinated by the Falling Man near the top of Auguste Rodin’s masterwork The Gates of Hell, just to the left of The Thinker.

It’s featured in a full-page photograph in Antoinette Le Normand-Romain’s 1999 book Rodin: The Gates of Hell.

Holding on with his left arm, the nude figure is contorted, his muscles taut, straining, as he is just moments away from losing his grip and tumbling off into the abyss.

Rodin’s Gates of Hell is a monumental work — roughly 20 feet tall, 13 feet wide and three feet deep — that was never finished. He tinkered with it for decades. Actually, “tinkered” is the wrong word. Rodin interacted with this huge work of his imagination, adding and subtracting, and borrowing from its forms to create separate works, such as The Thinker. What is viewed as the definitive version of the work was completed in 1889 or 1890, but wasn’t cast in bronze until after the sculptor’s death in 1917.

It is made up of 227 figures that stretch, strain, touch, bend, twist, writhe and reach out in the chaos of movement up and down the two (never-to-be-opened) doors, from top to bottom and from side to side.

It is a dynamic, organic masterpiece, and, in its way, the Falling Man is particularly dynamic and organic as it not only embraces the structure of the doors in a way that ties the top section with the middle, and not only sticks out into the space before the door (i.e., into the space of the viewer), but also insists, in its tenuous grip, that, at any moment, the man will lose purchase and not just lean into the viewer’s space but actually fall through it.

Le Normand-Romain quotes art historian Gustave Larroumet who, in 1895, described the Gates as:

“always being reworked, incomplete and swarming with life like a work being born.”

“Swarming with life,” an apt description if there ever was one. A few years earlier, an art critic had described the bodies covering the Gates as astonishing in

“their convolutions, by the way they bent unexpectedly backwards, by their unforeseen flexion [by] the troubling originality of the attitudes of these figures arched bowed jostled somersaulting, [by] these pairings [which] no other sculptor before had dared to express.”

Actually, many of Rodin’s forms were inspired by the sculptures and, even more, by the paintings of Michelangelo. Rodin, though, brought a new tautness, an emotional tension, to the surface of his (usually) naked figures, such as in Torso of Adelle.

Their muscles and postures seem to capture the moment of ultimate strain, often in an unexpected, unprecedented pose, such as Despair with her left foot sticking straight in the air, held there by her left arm, a position that wouldn’t seem to suggest despair but, in Rodin’s shaping of the figure, does.

Discussing his method, Robin once told a friend:

“I accentuate the lines which best express the spiritual state which I interpret…I emphasize the swelling of the muscles which translates distress. Here and there…I have exaggerated the tendons which reveal the impulse of prayer.”

One extremely helpful aspect of this richly informative and illustrated book is a map schematic of The Gates of Hell that Le Normand-Romain includes, just before she begins discussing some of the major elements of Rodin’s doors.

The Gates of Hell, for Rodin, was a workshop of ideas, many of which had a life, often many lives, away from the doors. His famous work The Kiss began as part of the Gates, but was removed because it didn’t fit amid the tumult of despair that was the subject of the work.

The Thinker at the top of the Gates also, of course, became a separate sculpture, Rodin’s most famous. It has been replicated so often for so many purposes — from commercialism to parody to commentary — that it is difficult to look at it with fresh eyes.

Le Normand-Romain, however, presents one of the first descriptions of the figure when it was initially seen as part of the Gates as a representation of Dante, the author of The Inferno, the epic poem that inspired Rodin. In 1885, Art critic Octave Mirbeau wrote:

“Above the capital in a panel slightly hollowed and vaulted, the figure of Dante is sharply projected and detaches itself completely from the rear which is clad with high-reliefs representing the arrival in Hell. The pose recalls somewhat that of The Thinker of Michelangelo.

“Dante is seated, the torso inclined forward, the right arm resting on the left leg, giving the body an indescribably tragic movement. His face, terrible as that of a vengeful God, is resting heavily on the hand which penetrates and forced back the lips: his somber eyes plunge towards the abyss from which mount the sulphurous vapours accompanied by the laments of the damned.”