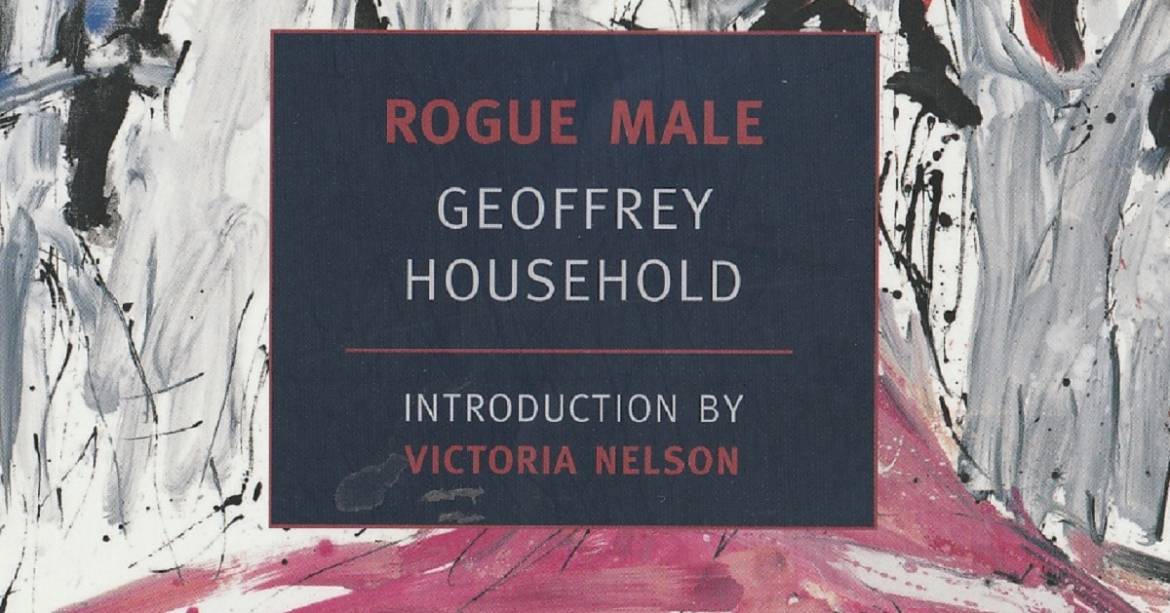 Published on January 1, 1939, Geoffrey Household’s Rogue Male crackles with tension and action, heightened by an unusual point of view — the perspective of a hunted man.

Normally, a hunted human being is too preoccupied and frantic to take the time to tell the story of the hunt, and that’s initially the case here.  An unnamed upper-class Englishman has been found in a foreign country with a high-powered rifle, equipped with a telescopic sight, pointed at the country’s “great man.”

Household never says so, but it seems pretty certain that the contemporary English reader was expected to understand that this “great man” was none other than Adolf Hitler.  Already, the Nazi leader had blackmailed the West into permitting him to invade the Sudetenland of Czechoslovakia and, later in 1939, would start World War II by invading Poland.  In other words, a prime target for a quixotic assassin.

Although this rifleman denies being an assassin.

“The biggest game on earth”

He’s a big game hunter who tells the reader in the book’s opening pages that he wanted to stalk an even tougher target — but only in a “formal” hunt, not a real one.  He had no desire, he says, to actually pull the trigger.

I can’t blame them. After all, one doesn’t need a telescopic sight to shoot boar and bear; so that when they came on me watching the terrace at a range of five hundred and fifty yards, it was natural enough that they should jump to conclusions….

They didn’t believe me, though they were beginning to understand that a bored and wealthy Englishman who had hunted all commoner game might well find a perverse pleasure in hunting the biggest game on earth.

It was, as the hunter describes it in these opening pages, a lark, a dangerous lark, one that those who have captured him will never permit to be made public.  And, to that end, he knows he will be killed.

Instead, he effects an escape with great skill, cleverness and suffering.  At one point early in his flight, weak from interrogation and deeply injured from what he has inflicted on himself in getting away, he is hiding in a tree.

My legs were not limp; they were immovable.  That was no disadvantage.  I couldn’t fall, wedged in as I was between the little branches of that prolific tree.

When I climbed into the narrowing cone and the boughs were thicker and smaller and greener, I got jammed.  That suited me well enough, so I fainted again.  It was luxury, almost sin.

“An outlaw in my own country”

Against great odds, the hunted man makes his arduous and painful way across Europe and gets back to England….

Only to find that foreign agents are still searching for him to shut him up permanently and to make sure no one else gets the idea of taking a potshot at the great man. (And it isn’t as if he can go to the English police for help since he’ll have to explain about why he is being sought.)

It came to this:  I was an outlaw in my own country as in theirs, and if my death were required it could easily be accomplished.  Even assuming they couldn’t fake an accident or suicide, no motive or a wrong motive would be discovered for the crime, and no murderer or the wrong murderer would be arrested.

What makes the novel so stirring is the verisimilitude that Household brings to the activities of his hero who is adapting all of his hunting craft and his ability to live in the most difficult of physical situations to successfully hide from those who are hunting him.

After sneaking out of London, he heads to Dorset in southwest England and, at a secluded spot he knows well, digs a burrow, an underground cave, where he takes up residence.  It is in this burrow that he writes in an exercise book what will be the first of three parts of his tale.  At the end of that first part, he writes:

I am now prepared to spend the first half of the winter where I am, subject to the bottom of the lane being still invisible when the leaves have fallen — which seems probable.  I cannot be seen and, if I am careful, I cannot be heard.  I avoid chopping wood and risk the noise of my bill-hook only on one night a week when I fill the inner chamber with brushwood and burn it.…

I am not content, in spite of the fact that this Robinson Crusoe existence ought to suit my temperament pretty well.  There is not, any longer, enough to do.  I am not affected by loneliness nor by the memories of this place.

A month later, when the hunted man resumes his journal, he explains that his “memories of this place” have to do with a young woman with whom he spent time in this area.  A young woman he liked a lot although he insists: “I was never in love.”

I begged her to stay in England, or at least, if she felt her duty to return, to temper her politics with discretion.  When I heard that she was dead, I really suffered very little.

That’s what he writes.

But what becomes clear as the journal continues is that the hunted man is totally reliable when he is talking about details of making a hidden underground cave or how he eludes new attempts at capture, but much less reliable about his own feelings.

A good deal of his unreliability, it seems, has to do with his need to protect himself from difficult truths.  But, as the novel unfolds, these difficult truths become unavoidable.

By this point, as he is writing this second part, the hunted man is desperate.  His trackers are closing in.

And, then, he is no longer hunted.  Now, he is trapped.

As he tries to figure out how to escape an inescapable situation, the difficult memories of his past come tumbling out.

Rogue Male is a compelling claustrophobic thriller, a model for many later imitators.

And, more than eighty years later, it is still a rich and meaty reading experience.