And Salomon’s book, prepared in conjunction with an exhibit at the Frick Collection of Cagnacci’s masterpiece The Repentant Magdalene, certainly shows that. Consider this image of David with the Head of Goliath: 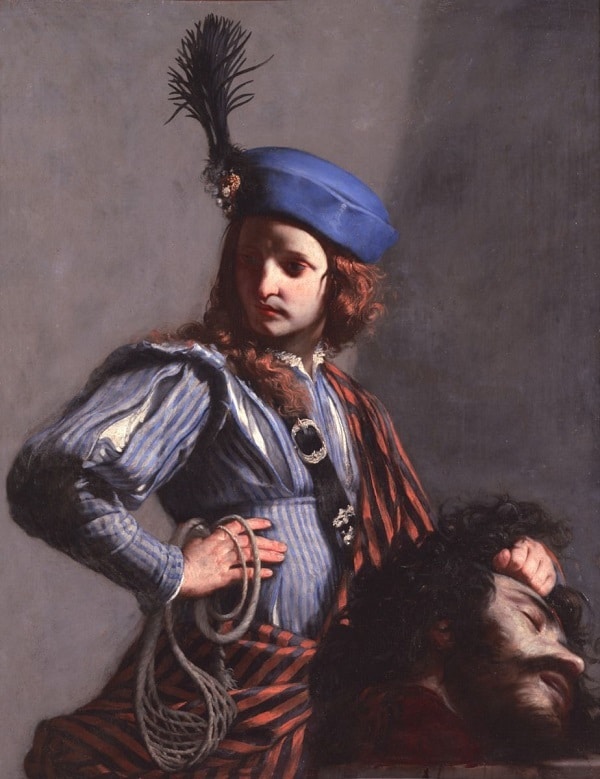 The giant warrior’s severed head is gruesome. But David — unlike most images of a spindly youth, roughly dressed — is elegant, stylish, as if he carried out his battlefield victory on the way to a court dance.

There is an edginess to this painting and to all of Cagnacci’s paintings, something disturbingly akilter. 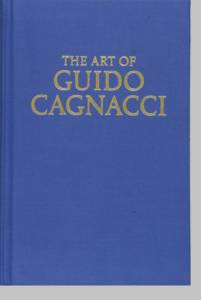 Cagnacci, who, it is obvious, learned many lessons from Caravaggio’s art, was an Italian painter of his era but also somewhat apart.  Perhaps that’s why modern critics have compared him to artists who came much later, including Vermeer, Manet, Ingres and Renoir.

Indeed, after his death, the artist was all but forgotten until the mid-twentieth century when he was rediscovered by critics who found in his bizarreness — his disturbingness — something that spoke to modern civilization.

Salomon writes that Cagnacci began to hit his artistic stride around the age of 30 when he completed Virgin with Three Carmelite Saints (1630) for a large altarpiece.  At the top was one saint and, in the bottom right, another. The bottom left was where the ecstasy of St. Theresa of Avila, seen in the detail here, was depicted: 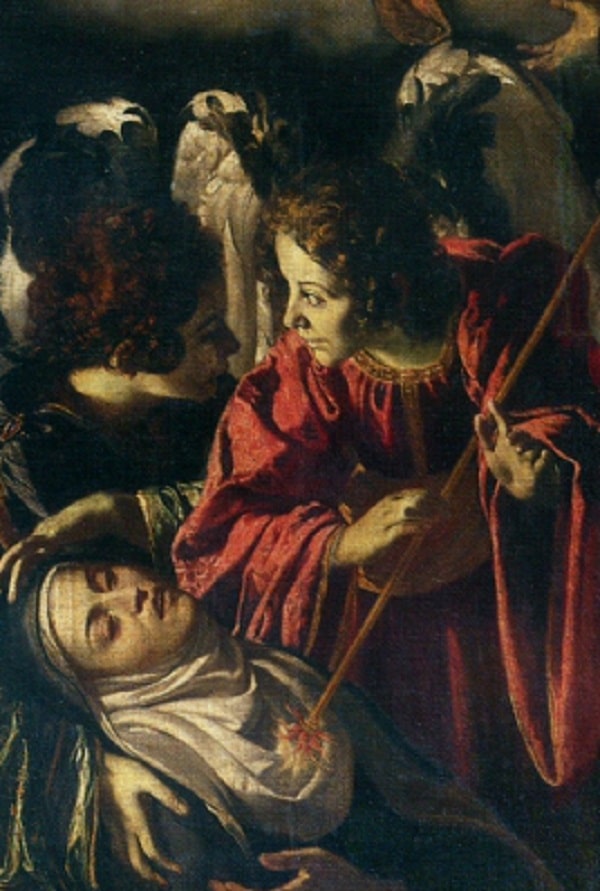 With their androgynous faces and outrageously long wings, these angels are extraordinary inventions.  It is overall a claustrophobic, yet deeply felt, creation, one in which Cagnacci’s talent begins to shine.

Whereas this scene of spiritual rapture from Teresa’s life is usually portrayed with a great deal of elbow room — such as in Bernini’s masterpiece Ecstasy of St. Teresa (1651) — Cagnacci squeezes everything into this corner of the painting, with the two angels conferring, seemingly amazed, heads close together, while, just below them, the angelic spear has pierced the heart of the saint.

In one way, the Cagnacci painting and the Bernini sculpture echo each other — the open-mouth moan, gasp or groan of pain and exaltation on the face of Teresa.

By contrast, Cagnacci, throughout his career, produced a goodly number of religious paintings that were downright voluptuous, such as his 1640 painting St. Mustiola: 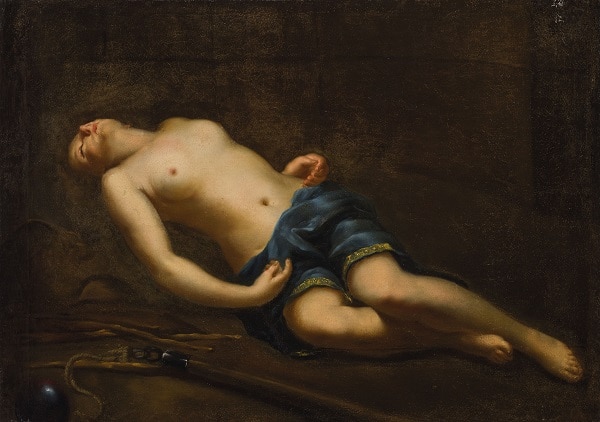 Mustiola was a young noblewoman who was whipped to death for her faith, and, in the painting, she is shown on the floor with the instruments of her martyrdom around her.

“A few drops of blood point to her violent death, but her body is otherwise unblemished and portrayed as sensual and striking….The viewer of Cagnacci’s painting is…uncomfortably enraptured by Mustiola’s body while contemplating the martyr’s heroic deed and self-sacrifice.”

“Clearly framed by the hair”

Another example is the Assumption of Mary Magdalene (painted around 1640-1645), a work that Salomon describes as “a daring invention” and also “eccentric”: 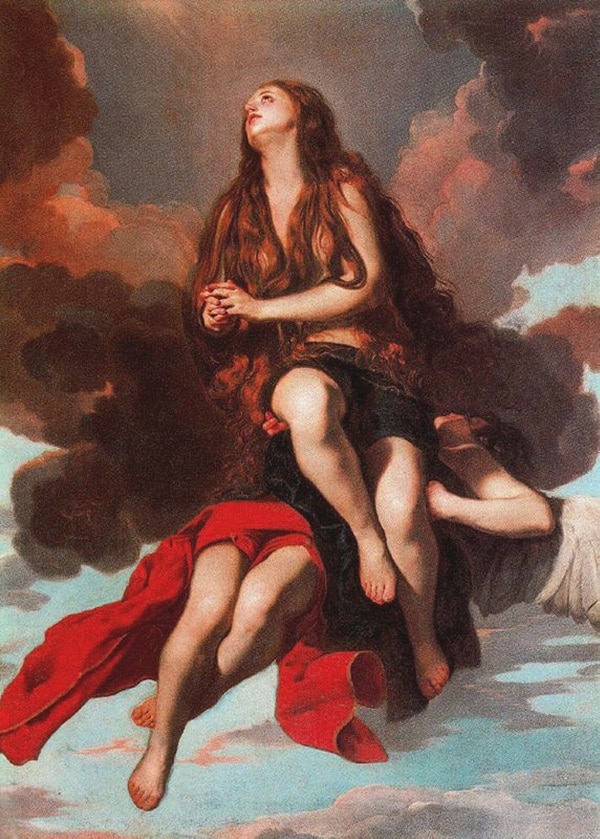 Magdalene, often characterized by church fathers as a former prostitute, is being carried — rather awkwardly, it must be said — to heaven on the body of an angel. Salomon writes:

“The Magdalene looks to heaven imploringly, her hands clasped in prayer….[She] is nude from the waist up and covered only by her luscious hair.  The detail, which in religious texts and art is meant to show the Magdalene’s modesty, is used here to make the painting more suggestive.”

He notes that, in an artful way, Cagnacci succeeds in using the hair to cover the saint’s breasts, carefully arranging his image “so that only the nipples, clearly framed by the hair, are visible.”

Cagnacci’s painting Cleopatra, executed in the final three years of his life, tells a story from antiquity of the Egyptian queen committing suicide with an asp. 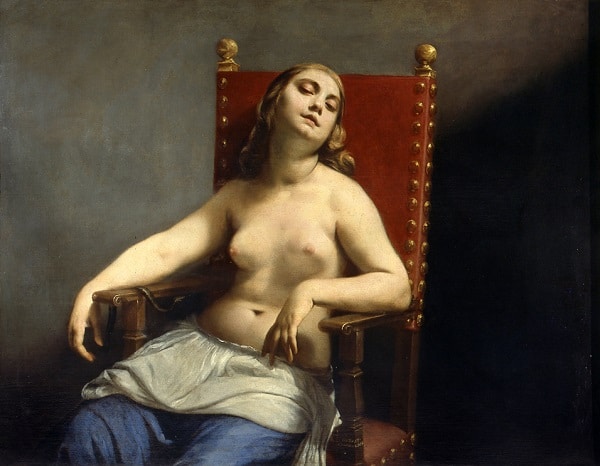 In a setting bereft of props with the exception of an elegant chair, Cleopatra has just been bitten by the snake and wears a “deeply puzzling” expression on her face, writes Salomon.

“The morbid image is designed to provoke pity and lust in equal measure.  In the sharp focus on the single female figure, Cagnacci reaches a sensibility that is almost nineteenth-century in character; the painting has often been compared to works by modern artists, even to Manet and Renoir.” 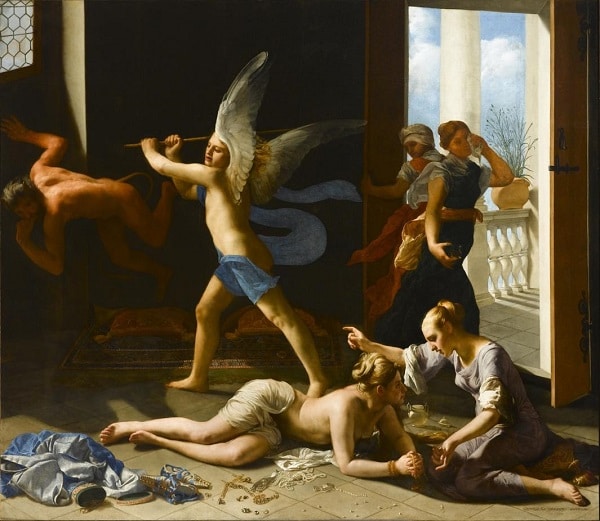 This painting, now at the Norton Simon Art Foundation in Pasadena, is gracefully graceless in the awkwardness of the three groupings — an angel chasing away a flying demon, two handmaidens in ambiguous poses at the door and Magdalene beautifully sprawled on the floor listening to the encouragement from a woman who art historians believe is her sister.

The still life groupings of the luxurious trappings of Mary’s now-former life in the foreground are incredibly detailed and evocative: 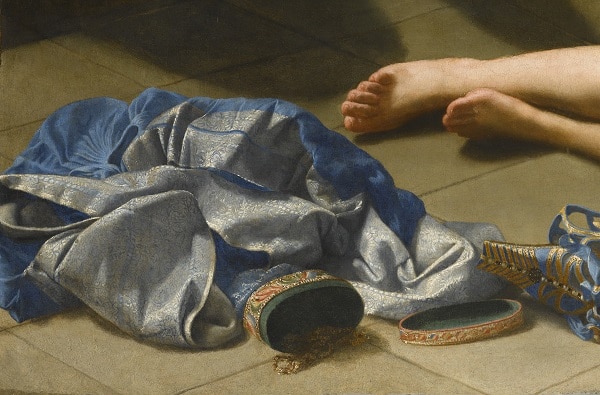 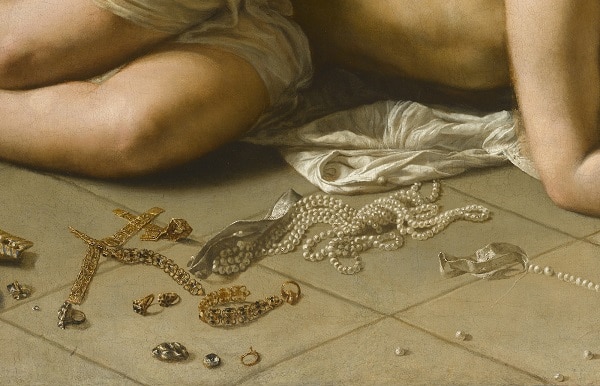 Most striking, though, is the encounter of the two women, the looks between them, a look of trust from Mary and a look of care and love from the other.  Indeed, the sister’s arms are outstretched in a manner that is a kind of a hug around Mary’s suddenly vulnerable person. 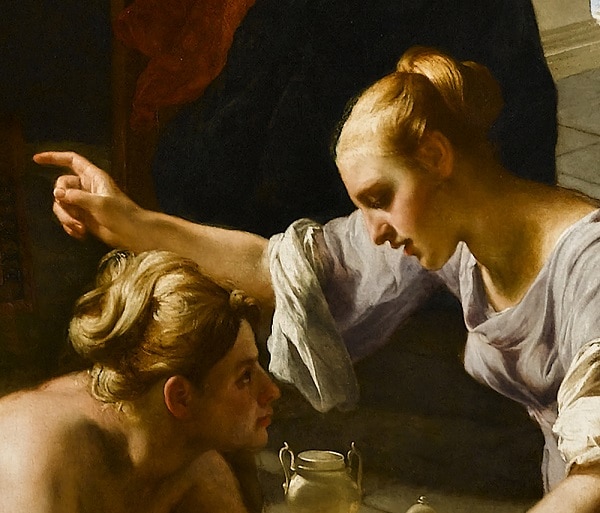 All in all, The Repentant Magdalene is very modern in its unsettledness and its awkward beauty. Long forgotten by the art world, it only came back to light in 1981 and has been an important impetus in the move to re-evaluate Cagnacci’s art and significance.

Even so, as early as the 1950s when the artist and his work were first being rediscovered, one critic described two of his paintings in words that could be applied to much of his art:

“A sensuous beauty, an exuberant life that expands into a spectacular vision, a magnificent and joyful ballet; a world that delights itself in an enchanted game of brilliant colors, of dazzling lights, of sounds, and at the same time discovers a reality that is closer and more earthly, a new, much abbreviated relationship with nature…”