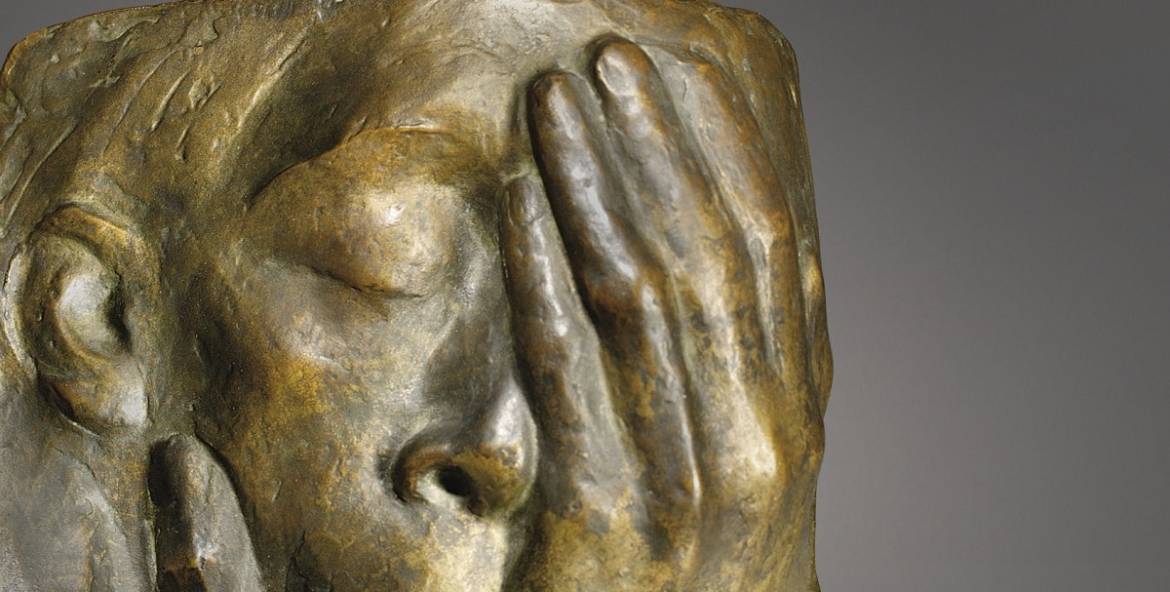 Previous item Poem: None of my own Next item Essay: I found God in the...

Book review: “The Book of Lamentations: A Meditation and Translation” by David R. Slavitt

David R. Slavitt’s 2001 The Book of Lamentations: A Meditation and Translation is a post-Holocaust reading of the short biblical work inconsolably grieving the destruction of the Temple in Jerusalem in 586 BC and the Babylonian exile of many thousands of Jews.

It is a book that is recited on the fast day of Tisha B’Av, the ninth of Av (in late July or early August) and mourns not just that initial loss but also the loss of the second Temple, the dispersal of Jews across the globe, a series of calamities, pogroms, tragedies and persecutions down the ages, many on or around Tisha B’Av, and now the Shoah.

Slavitt’s 58-page meditation on the biblical text and its meaning is written in the cadences and diction of Lamentations.  It concludes with a chapter that reads:

They answer each other somehow, the Temple and Auschwitz, for

if one was the place where God was present, the other was the

place from which he was absent….

Our first loss was of Eden, which may be said to have figured all

other disasters.  The many destructions of Jerusalem were

confirming catastrophes.  In our grief there was a wisdom we

acquired — or it acquired us.  It made us what we are, yearning

for relief but no longer expecting it…

After the ruin of the Temple, we could never again be surprised —

not even by Auschwitz.

Even so, in Slavitt’s translation, there is a heightened sense of grief in a text that already is an unrelenting keening for what has been lost.

Consider 2:20 which, in the King James Version, is presented this way:

Behold, O Lord, and consider to whom thou hast done this. Shall the women eat their fruit, and children of a span long? shall the priest and the prophet be slain in the sanctuary of the Lord?

This verse is one of the most brutal among the 110 in Lamentations, focused as they all are on the wretchedness of those who have lost not only their homes, their families, their city, their land but also the center of their faith.

Yet, Slavitt pushes this keening to an even higher pitch:

That women crazed by hunger should eat their own children,

that prophets and priests should be slain in the sanctuary’s

safety…Is this your work, O God?  Do you see what is

happening here?  Is this what you could have wanted?

Unlike the King James Version, Slavitt doesn’t put the cannibalism and priestly murders in the form of a question.  He takes the words that KJV uses to start its verse and makes them questions — questions without an answer.

“She is filthy, unclean” 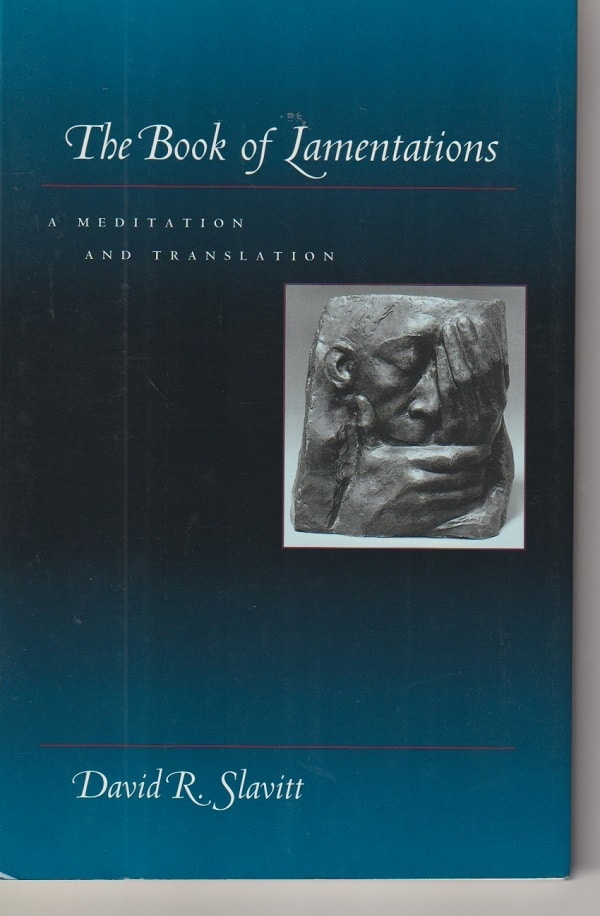 From the start, Slavitt ratchets up the intensity of these already fiercely bitter words.  One way is his fore-fronting the human metaphor for the city of Jerusalem.

Instead of saying, “Jerusalem…she,” he writes “she…Jerusalem.”  Look, for instance, at these two verses from the first chapter (1:1 and 1:8) as they appear in KJV:

Jerusalem hath grievously sinned; therefore she is removed: all that honoured her despise her, because they have seen her nakedness: yea, she sigheth, and turneth backward.

See the difference in Slavitt’s treatment:

Alas, a woman, widowed, alone, the city sits that once was full of

people and great among the nations, a princess among the

How grievously has Jerusalem sinned: she is filthy, unclean, and

all that did her honor have seen her naked and shamed.  She

groans in the grief she feels and turns away her face.

In the first verse, Slavitt focuses the reader’s attention on a woman alone and widowed, who is the city.  And, in the later verse, she is the subject of the sentences, rather than the object:

She is filthy, unclean and groans and feels grief and turns her face away.

The original text of the first four chapters of Lamentations are acrostics, the first letter of each verse spells out the Hebrew alphabet.  The third chapter is a triple acrostic which means the first three verses begin with the Hebrew equivalent of A, and so on.  The only non-acrostic is the fifth chapter.

Slavitt made the unusual decision — I haven’t found another English translation that does this — to shape his translation into acrostics to match the original four chapters.

In a Note on the Translation, he points out that all translations are based on trade-offs in an attempt to best do justice to the original.  He writes:

Any version in English that fails, then, to reproduce this curious trope has missed what I take to be an essential aspect of the text, for what we have here is not merely embellishment but a serious assertion that the language itself is speaking, that the speech is inspired and that there is, beyond all the disaster and pain the book recounts, an intricacy and an orderly coherence the poetry affirms in a gesture that is encouraging and marvelous.  The texture of the poetry is what lets us know that, somehow, the catastrophe is not total.

In other words, the imposition of what may seem like an odd and arbitrary form onto the mourning verses is, in fact, an affirmation that, if humans can’t control events, we can at least frame them in a way that gives us a sense of comprehensibility.

Slavitt acknowledges that, to mirror the acrostic format, he had “to rove a little, to reorder, to adjust.”

For me, this shuffling of material works well, and maybe that’s because it frees up Slavitt — or forces him — to make his translation more direct and accessible.  Consider 4:5 as it is in KJV:

They that did feed delicately are desolate in the streets: they that were brought up in scarlet embrace dunghills.

Modern translations don’t sound as stilted, but they’re not as fluid as Slavitt’s. Because this is the fifth verse, he’s got to start the verse with the letter “e.”  Here’s what results:

Everywhere ruin attends.  Those who nibbled on dainties are

starving and die, and they who lolled on purple cushions now lie

The opening sentence is a summary of the second, but it isn’t strictly in the verse.  Still, to my mind and ear, it is a welcome addition, not only because it keeps the acrostic going but even more because, like a base rhythm, it underlines and heightens the “nibbled on dainties” and the “die” and “lie” echoes.

This can be seen even more in the triple acrostic of the third chapter.  Typically, English translations make three separate verses of each triple letter verse in the Lamentations chapter in Hebrew, without attempting to match the letter order of the original.  For example, here are the final three verses of the KJV chapter, 3:64-66:

Render unto them a recompence, O Lord, according to the work of their hands.

Give them sorrow of heart, thy curse unto them.

Persecute and destroy them in anger from under the heavens of the Lord.

Slavitt, by contrast, groups them together into a triune verse that is strengthened by his employment of the common English poetic tactic of alliteration:

Vanquish them, Lord, with your hands and requite their evil deeds.

Vainglorious, vicious, vile, they deserve your curses upon

them.  Vigilant, you will pursue them, and from heaven destroy

Vanquish those of are vainglorious, vicious, vile.  Be vigilant to chase them down and “destroy them forever.”

Even as Slavitt has spent his earlier meditation on the question of just how guilty Jewish people should feel for breaking their Covenant with God — Was it really the people who did it?  Or their leaders?  Or betrayers?  Or the prophets? — his English words of the text of Lamentations come to this point again and again:  That all the destruction and horror that the Babylonians inflicted on the Jews was deserved.

That, in some way, the tragedies down through the ages are part and parcel of the Covenant.

That these are, as he writes in his meditation, “terrible truths of God’s rough embrace that has been the life of Jews.”

In the final chapter, Slavitt hews closely to that of KJV and other English translators.  Here’s KJV for 5:7-8:

Our fathers have sinned, and are not; and we have borne their iniquities.

Servants have ruled over us: there is none that doth deliver us out of their hand.

Slavitt’s version is more direct in the second verse but similar:

Our fathers sinned but are dead, and we bear the weight of their

We are ruled by the slaves of strangers, and no one can save us.

The question implicit in both versions is:  Why should we have to atone for the sins of our ancestors?

Explicit in both is the despair: “there is none that deliver us…” and “no one can save us.”

In the final verse of the book (5:22), Slavitt diverges from KJV and other English versions in turning its statements into questions.  Here is KJV:

But thou hast utterly rejected us; thou art very wroth against us.

Addressed to God, these flat assertions that the Lord has rejected us and is angry at us summarize all of Lamentations.

Slavitt, though, goes one step further.

After the destructions of the two Temples, after the Babylonian exile and the Jewish Diaspora, after the persecutions and pogroms, the forced conversions and the blood libels, after Treblinka and Auschwitz, after all the keening and grieving and sorrow that has gone before in all of the earlier verses of Lamentations, he is left with questions that are not questions but demands.

And not demands but entreaties.

Or is this a final rejection?  Can your anger endure forever?