Previous item Poem: Communion of saints Next item Poem: "I was born in the...

Maybe I should have a disclaimer at the start of this review.  I’m afraid this may be unfair to Geraldine McCaughrean and her re-telling of Geoffrey Chaucer’s The Canterbury Tales. My only excuse is that I am using her book to talk about a larger question.

When I began reading McCaughrean’s book in its 1996 version from Puffin Classics, I found myself disconcerted.

I think what I expected was something of a translation of the original poem of 24 stories, totaling more than 17,000 lines of Middle English.  I knew it would be simplified a bit since it was from Puffin Classics which, for children, publishes lite versions of great literary classics.

What I got was not a translation. McCaughrean doesn’t use many, if any of Chaucer’s words, phrases or metaphors. As the book cover says, she is re-telling of the tales — well, 13 of them.

By the way, there are many English versions of The Canterbury Tales that try to translate Chaucer to a greater or lesser extent, such as The Canterbury Tales: A Complete Translation into Modern English by Ronald L. Ecker and Eugene J. Crook, published in 1993. (It’s available for free online.) 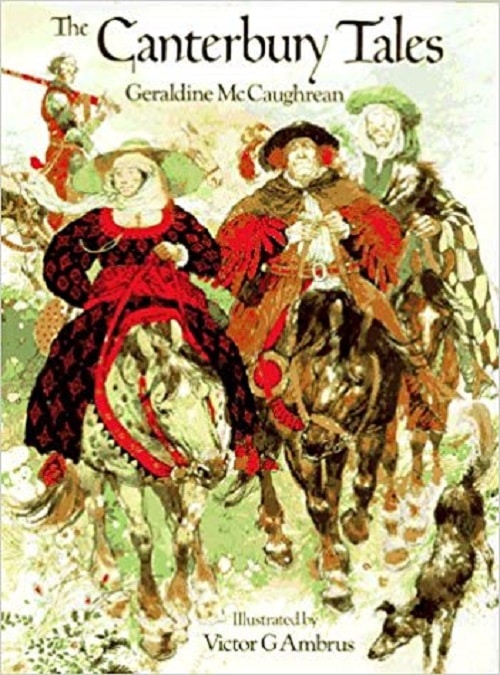 Also, by the way, as I was doing a little research, I found that McCaughrean’s text was originally in an illustrated version of The Canterbury Tales for children, published in 1984 by Oxford University Press.

Chaucer does some of this in his Prologue but doesn’t carry it through the Tales except for a bit of chatter before and after some.

McCaughrean gives much more emphasis to the story of the pilgrimage, and, as a result, for me, the tales in her re-telling seem subordinate.

No attempt to convey Chaucer’s language

In addition, McCaughrean doesn’t make any attempt to convey a sense of Chaucer’s poetry or his descriptive talents or his wit.  For instance, here’s how she starts her book:

“April rain was dripping off the branches as I rode beneath them.  But the last sunlight of a fine spring day made the leaves shine, and I was glad to be on my way.”

Here’s how Chaucer does it (in the Ecker-Crook translation):

“When April’s gentle rains have pierced the drought

Of March right to the root, and bathed each sprout

Through every vein with liquid of such power

It brings forth the engendering of the flower;

When Zephyrus too with his sweet breath has blown

Through every field and forest, urging on

The tender shoots, and there’s a youthful sun,

His second half course through the Ram now run,

And little birds are making melody

And sleep all night, eyes open as can be

(So Nature pricks them in each little heart),

On pilgrimage then folks desire to start.”

Granted, McCaughrean is writing for pre-teens and young teens.  Her opening is a lot easier for someone to read.  It doesn’t demand much, but, at the same time, it doesn’t give back much.

In contrast, if you approach Chaucer’s words with some openness — even if you’re young (and maybe with a helpful teacher to tell you what to look for — you are likely, I think, to enjoy his language, such as him writing about the rain bathing “each sprout/Through every vein with liquid of such power/It brings forth the engendering of the flower.”  Good stuff.

The Wife of Bath

Another example is the Wife of Bath.  In her Prologue, McCaughrean writes:

“[A] gigantic woman in an enormous hat sat on the other end of his bench shouting and laughing in a voice that drowned most others.”

Compare that with Chaucer:

“From near the town of BATH a good WIFE came;

She was a little deaf, which was a shame.

She was a clothier, so excellent

Her work surpassed that of Ypres and Ghent.

When parish wives their gifts would forward bring,

None dared precede her to the offering–

And if they did, her wrath would surely be

So mighty she’d lose all her charity.

The kerchiefs all were of the finest texture

(And must have weighed ten pounds, that’s no conjecture)

That every Sunday she had on her head.

The fine hose that she wore were scarlet red

And tightly laced, she had a nice new pair

Of shoes. Her face was ruddy, bold and fair.

She was a worthy woman all her life:

At church door with five men she’d been a wife,

Not counting all the company of her youth.

(No need to treat that now, but it’s the truth.)

Strange rivers she had crossed in foreign climes;

She’d been to Rome and also to Boulogne,

To Galicia for Saint James and to Cologne,

And she knew much of wandering by the way.

She had the lover’s gap teeth, I must say.

With ease upon an ambling horse she sat,

Well wimpled, while upon her head her hat

Was broad as any buckler to be found.

About her ample hips a mantle wound,

And on her feet the spurs she wore were sharp.

In fellowship she well could laugh and carp.

Of remedies of love she had good notions,

For of that art’s old dance she knew the motions.

First of all, it is unfair to compare anyone to Chaucer. (Well, maybe Shakespeare.)

Second, McCaughrean was aiming to write a different book.  I get that.

My point is simply that describing the Wife of Bath as laughing loud is fine as far as it goes.

To describe her as Chaucer does in the Ecker-Crook translation — with her red hose and red face and sharp spurs and five husbands, “[n]ot counting all the company of her youth” — is delicious. 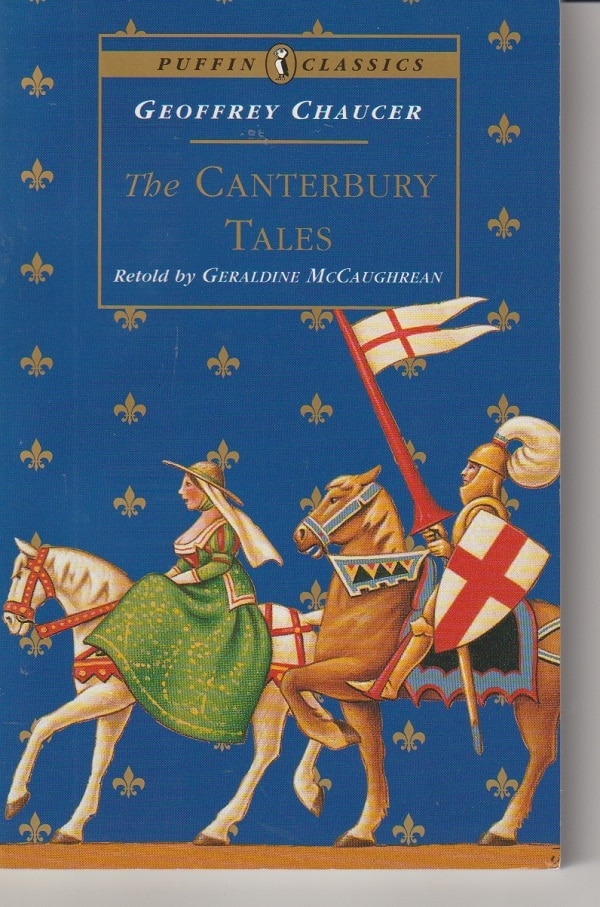 It is a daunting task that McCaughrean faced — taking great literature and putting it into English.

This is true whether one is translating the original or paraphrasing it or, as she is doing, re-telling it in 113 pages.  Consider how difficult it is to take Shakespeare’s Hamlet and render it in Hungarian or Korean or Swahili.  Off the bat, a lot of the beauty and piquancy and wit of the Bard’s language is lost.

It’s still possible to try to approximate the language of the original which is what Ecker and Crook do.  Granted, it’s easier to accomplish that with The Canterbury Tales than, say, rendering Hamlet in Korean since Chaucer’s original was written in Middle English which is different from, but not that different from, Modern English.

But, if, as McCaughrean does, a writer don’t try to convey a sense of the poetry of the original, what the reader gets is simply the stories.

I can see the value of publishing the stories without any of the poetry.  Generally, they’re kind of fun.  And the ones that are boring are presented by Chaucer and by McCaughrean in a way that makes them funny.

The stories are mildly entertaining.  I also suspect that some are pretty jarring.  For instance, the expectations of a wife — as shown in such stories as in the Scholar’s tale about the test of a good wife, or the Franklin’s tale about winning another man’s wife through magic — are radically different from what is culturally acceptable today.

That jarring quality, I think, is a good thing.  It brings some needed gusto to the text.  But is a young reader likely to think much about it without the help of a good teacher?

And, without that literary spice, how likely is it that a young reader would find these stories and the book’s over-story anything but rather tame and bland?

The stories are especially insipid because they have been scoured of everything having to do with sex that was in Chaucer’s originals.

The ribald nature of many of the tales in Chaucer’s poem, especially combined with his witty language and delivery, gives the stories great verve and sharpness and grit.  Without all this, the stories are like statues that have been filed down to the vaguest of shapes.

Of course, I realize who McCaughrean’s target audience is.  I realize why all that sex — and there is an awful lot of it — has been excised out.

But all that trimming drastically changes these bawdy tales and this delightfully coarse poem.

There are other sorts of retellings or adaptations or abridgements of great literature out there from booksellers, including Homer’s The Odyssey, Charles Dickens’ Great Expectations and The Three Musketeers by Alexandre Dumas.  And several collections with titles along the lines of Stories from Shakespeare.

My question is whether this makes sense.

I’m wondering what Janey Ten-year-old might think if she reads McCaughrean’s book and, then, seven years later, at State University starts to read Chaucer’s original. Maybe it will help that she has some familiarity with some of the outlines of the stories in Chaucer’s poem.  But that seems pretty inconsequential.

My thinking is that, if you don’t want a pre-teen or young teen to read the real literary work, leave it alone.

No need to feed them some vague approximation of it.