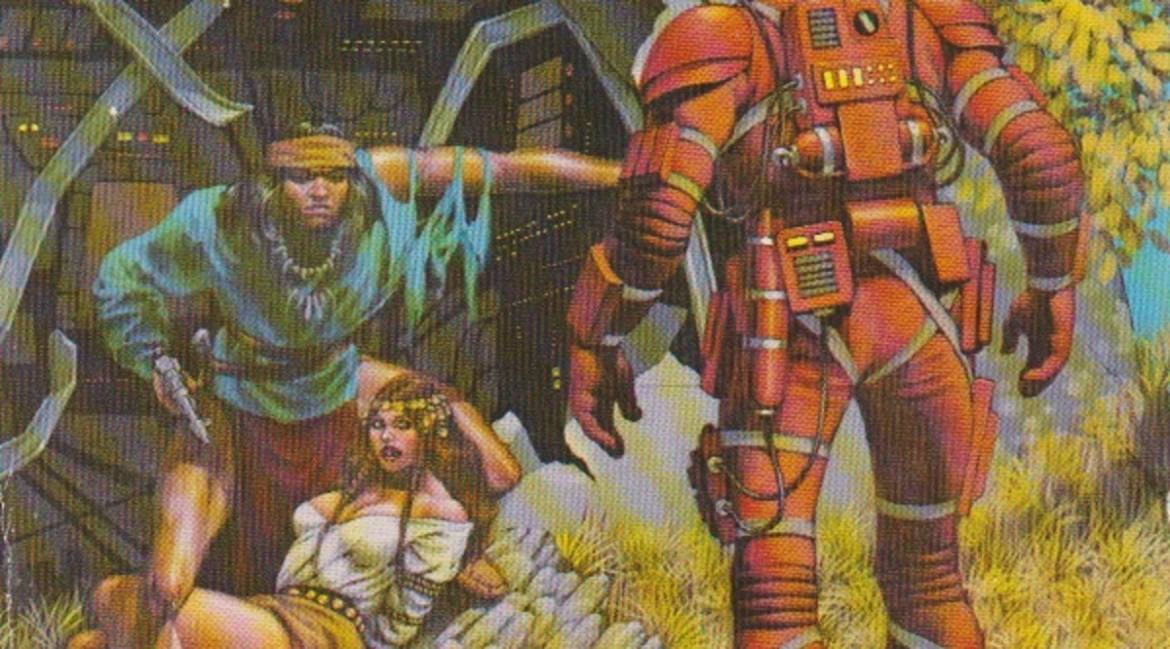 What’s striking about Andre Norton’s 1962 novel The Defiant Agents is how political and moral it is.

Norton was a writer of adventure novels, cranking out an average of about three a year during her 70-year career as a novelist for a total of more than 200.  (She died at the age of 93 in 2005.)

She specialized in science fiction and, to a lesser extent, fantasy.  Her usual goal wasn’t to make political commentary the way, say, George Orwell did in 1984.

The Defiant Agents is the third book in what came to be called the Time Traders series which began in 1958 with The Time Traders and continued in 1959 with Galactic Derelict.  Although both books pitted American agents against the menacing Reds of the Soviet Union, it was just the usual white hat/black hat dichotomy.

Here, though, in the midst of the adventure in The Defiant Agents, Norton is making clear and direct commentary on the daily headlines of her era — the headlines dealing with the threat, seemingly unavoidable, of nuclear weapons.

The title is a hint.  The agents in the book are defiant for political and moral reasons.

Perhaps it has to do with the time when Norton was writing.  Since the United States dropped the first atomic bomb on Hiroshima in 1945, world tensions had been escalating as more and more nations obtained atomic and hydrogen bombs and developed larger and larger arsenals.

This would come to a head in October, 1962, with the Cuban missile crisis when the Soviet Union and the United States played a game of nuclear chicken over the building of missile sites in Cuba, a veritable stone’s throw from the U.S. mainland.

Norton’s manuscript for The Defiant Agents had been prepared before that crisis, but she was well-aware of what a nuclear holocaust would bring.

Indeed, her first science fiction novel, published in 1952 as Star Man’s Son: 2250 A.D., and often reissued later as Daybreak: 2250 A.D., was one of the first novels to look at what life on Earth would be like in the aftermath of a global nuclear war.

It’s abundantly clear that it was the nuclear threat that Norton had in mind when she wrote The Defiant Agents and had her character Travis Fox find a treasure trove of powerful alien weaponry.

Fox, a modern-day anthropologist, is an Apache who, with other members of his tribe, has been sent through time and space to this planet, a world that had once been important to the long-gone aliens who left their guns and bombs.

While the Apaches represent the U.S., they are opposed by two groups — Russians of Mongol descent who have been sent to the planet with their Soviet overseers.

The Apaches and Mongols have undergone special psychological manipulation to enable them to get in touch with their deep ethnic memories of operating well in the vast plains of this planet.   When the U.S. spacecraft crashes on landing, the Apaches survive but not their U.S. monitors.

In the novel, the Apaches and Mongols come to the realization that they have more in common with each other than the Mongols do with their overlords.  So, it becomes the two tribes against the technologically powerful Soviets.

But defeating the Reds would only be a partial victory.

That’s because the powerful alien weapons would be available for future use, and that’s what’s really got the Apaches and Mongols scared.  It seems that they’re stranded on this planet, but what if the Soviets send another ship?  Or, for that matter, the Americans?  What is one or the other tribes wants to get control of the planet?

“To use this on a living thing!”

Norton makes it clear that these weapons are truly frightening.  Fox takes out the smallest and most mobile of the arms he can find, a kind of handgun, and, to test it, he points it at a bush and presses the trigger:

The result of his action was quick — quick and terrifying.  There was no sound, no sign of any projectile…ray-gas…or whatever might have issued in answer to his finger movement.  But the bush — the bush was no more!

A black smear made a ragged outline of the extinguished ash, but the bush was gone!

One character describes it as “powerful beyond belief,” adding, “In truth evil is here!”  Then, another raises the gun and points it at a rock:

This time they were able to witness disintegration in progress, the crumble of the stone as if the substance was no more than sand lapped by river water.  A pile of blackened rubble remained — nothing more.

“To use this on a living thing?” Buck protested, horror basing the doubt in his voice.

“The meddling of fools and zealots”

Immediately, the Apaches and the Mongols decide that, once they’ve finished off the Soviets, they will have to close up the alien armory and destroy all evidence of it.

Suppose the Western Conference had discovered the warehouse and explored its riches, would they have been any less eager to exploit them?  As Buck had pointed out, one’s own ideals could well supply reasons for violence.  In the past Terra had been rocked by wars of religion, one fanatically held opinion opposed to another.

There was no righteousness in such struggles, only fatal ends.  The Reds had no right to this new knowledge — but neither did they.  It must be locked against the meddling of fools and zealots.

The Defiant Agents is only a science-fiction adventure novel, and Norton was only a novelist.

But it contained a message of the “fools and zealots” of every age.  Particularly her own.