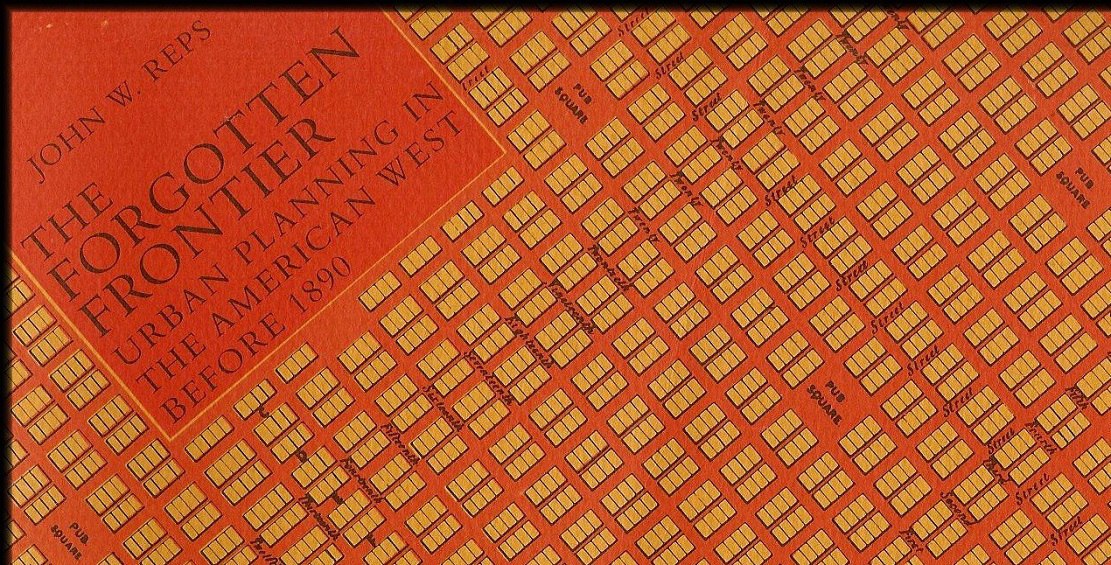 In 1856, some 60 Roman Catholics from eastern Iowa, calling themselves St. Patrick’s Colony, moved together to the Nebraska side of the Missouri River where they laid out an elaborate town site called St. John’s, near the present-day hamlet of Jackson.

North-south streets were conventionally numbered [writes John W. Reps], but those running east-west constituted a partial hagiology of the canonized: St. Margaret, St. Elizabeth, St. Monica, St. Anastasia, and so forth. Even saints could not guarantee urban salvation, however, and after the financial panic of 1857 the town began a steady decline. By the mid-1870s it consisted of no more than a handful of houses, a fate shared by several others whose ghostly remains dotted the river bluffs.

Throughout the 19th-century across the American West, pioneers crossed prairies, mountains and deserts, and built cities for themselves.

Some, like St. Patrick’s Colony and, much more successfully, the Church of the Latter Day Saints, were seeking religious solidarity in the creation of their new urban places. Some wanted to be next to railroad lines or near established outposts, such as military forts and mines for gold and other precious ores.

Almost all of them involved speculators of one sort or another. Men who saw the founding of a village that might grow into a city as a means to great profit and wealth. To make that profit, these men had to subdivide the land — and then sell it. In other words, they had to transmute the land into real estate.

This is the story that the estimable John W. Reps tells in his 1981 book The Forgotten Frontier: Urban Planning in the American West before 1890.

Western towns… differed little from their Eastern counterparts. Most were founded by promoters and settled my migrants from the East who brought with them older urban values, expectations, and institutions. Western towns quickly took on the appearance and character of those in other regions of the nation.

The editor of a Portland, Oregon, journal, writing in 1886 [noted Portland’s] … ”well-paved and graded streets, the lines of street railway, the mass of telegraph and telephone wires, the numerous electric lights and street lamps, the fire-plugs and water hydrants, the beautiful private residences surrounded by lawns and shade trees…and the innumerable other features common to every prosperous Eastern city and commercial port.”

This is a story that, as Reps’ title suggests, has been lost over the past century. For that, you can blame the movies and Frederick Jackson Turner.

Take a look at this image of Denver in 1867. The foreground will look fairly familiar to anyone who’s ever watched a western.

You know the scene I’m talking about: The cowboys or the sheriff or the pioneers in covered wagons are shown crossing over vast vistas of prairie, and then we see them coming into a town and down a street quite a bit like the street on display in this image.

What’s different about this scene, though, is that the buildings don’t just extend for a block or two before coming to the great emptiness of the prairie or desert beyond. Here, if you look far into the distance, you see the street extending on and on and on, as if this town stretches forever.

Something else about this scene? This isn’t Main Street. This is F Street which suggests that there are at least another five streets going in one direction of the alphabet (A-E) as well as probably some or many more going in the other direction (G-Z).

Modern people have been trained by western films, as well as western art and novels, to think of the West as an empty place with people few and far between. A place where any town is small and insignificant, no more than a Main Street and a few side avenues.

In reality, though, great numbers of people who moved to the West landed, sooner or later, in some sort of urban place. explains Reps, a historian of city planning whose works are essential touchstones for researchers. And many of those urban places grew into great cities, even as the West was still being explored.

The desire for urban order

Frederick Jackson Turner is the Wisconsin-born historian who, at a meeting of historians in Chicago in 1893, argued that the efforts of Americans to explore and settle the great American frontier had shaped the national character. In doing this, he and his followers argued that urbanization was the last stage of the sequence which proceeded in this manner: (1) fur traders, (2) cattlemen, (3) miners, (4) pioneer farmers, (5) equipped farmers and (6) city dwellers.

Reps shows, however, that, in most cases, cities, boosted by promoters and entrepreneurs, led the advance into the wilderness.

For instance, in the 1850s, Denver and other towns were being developed at the base of the Rockies “some 250 miles west of the line of settlement” in Kansas and Nebraska. Some were mining centers where “the desire for some kind of urban order” led committees of miners and surveyors hired by the first municipal governments to lay out streets and property lines.

Meanwhile, others, such as Sacramento, were founded to serve as supply and outfitting centers:

These and other towns were planned by entrepreneurs who recognized opportunities that were far less risky, with greater potential for long-term profit, and involving fewer hardships than scrambling through the Sierra or Rocky mountains with a prospector’s pick and pan.

Even Columbus had that “desire for urban order.”

In December, 1492, he established Natividad, Spain’s first outpost in the New World, erected in part from the timbers of the ill-fated Santa Maria.

Indeed, in their occupation of broad swatches of the North and South American landscape, the Spanish had the Law of the Indies, a detailed set of regulations regarding the establishment and layout of new towns. These rules were kept in place by the Mexican government after ousting the Spanish from North America.

Columbus wasn’t the only famous name involved in town planning. Abraham Lincoln made his living for a time as a surveyor, plotting new towns throughout Illinois.

And then there was Joseph Smith, the founder of the Mormon church, who laid out in 1833 the detailed plan shown below for the town of Zion which he was trying to establish near Independence, Missouri.

Zion was never built, and Smith was murdered by an Illinois mob in 1844. However, the street and property plan for Salt Lake City was modeled after Smith’s Zion drawing, and hundreds of Mormon-founded towns throughout the West were modeled on Salt Lake City.

Imagination, the grid and alleys

Like many an urban planner, Reps finds the rigid adherence to the street grid in the vast majority of towns across the West a failing. Yet, the grid was simple and direct, and it usually fit well within the national Rectangular Survey System which had been created by the Land Ordinance of 1785.

Certainly, more imaginative approaches, such as the two below, make the streetscape less monotonous. But do they also make it more difficult for people, particularly visitors, to find their way?

Most city plans for the West, like those of the Middle West, look a lot like the plans of Salem and Portland, Oregon, small portions of which are shown below:

One point that Reps doesn’t mention has to do with alleys. Salem (left) has alleys through, at least, some of its block. But there aren’t any in Portland.

Alleys serve many purposes, one important one being a place to have garbage cans for disposal and pick up. Without alleys, the trash has to come to the front of the property.

Chicago, for instance, is often described by visitors as a very clean city, and that is due in part to the ability of Chicagoans to put their garbage out back, away from passing eyes. In Manhattan, by contrast, the lack of alleys means garbage must be put out on the sidewalk for pick up. (This is also true in many American suburbs.)

Out in those vast vistas

This isn’t to deny the importance of the farmers and ranchers and cowboys and all the rest who spent their time out in those vast vistas.

But they were able to be out there because, nearby, was a city to serve as a supply house, a safe haven and a home base.

Book review: “I Shall Wear Midnight” by Terry Pratchett 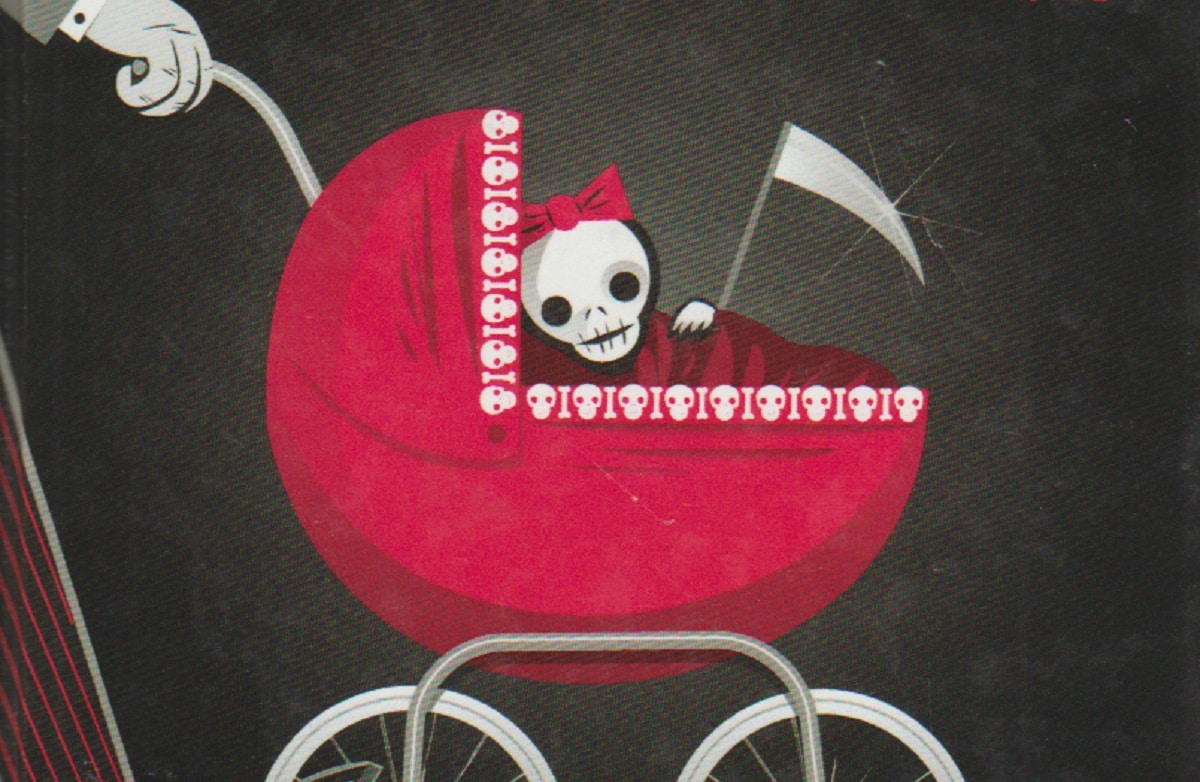