Book review: The Gift of Stones by Jim Crace 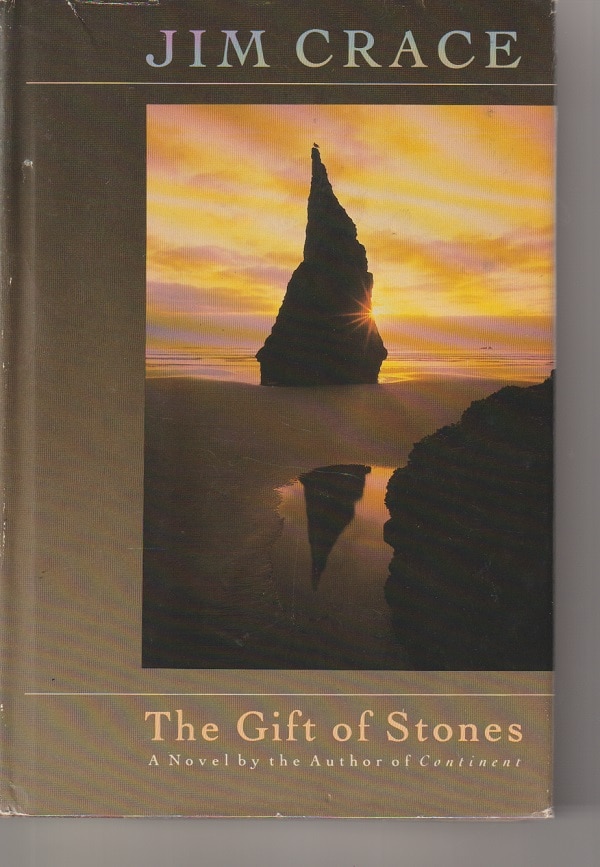 It took me a long time to finish Jim Crace’s “The Gift of Stone” because, although short, it is a very, very good novel.

At 179 pages, “The Gift of Stones,” published in 1988, has the look of a quick read. Yet, over and over again, I found myself making my way through five, six, seven pages, and then setting the novel aside.

It wasn’t that I couldn’t go further or didn’t want to go further.

No, I wanted to stop to savor what I’d just read. And also because it seemed that, having gone through a particular scene or event, I would be disrespecting the novel by rushing on.

I don’t normally feel that way while reading a book, whether fiction or non-fiction. But, here, I had the sense that to rush on would taint what I was going to read as well as what I’d just read.

“The Gift of Stones” is the story of a Stone Age community on the island now called England. The community mines and works flint into tools and other useful items, and then trades them for food, clothing and other necessities. Unknown to its self-satisfied residents, the community is standing at the edge of the Bronze Age.

The novel is narrated by a misfit storyteller and his daughter.

The man became a misfit as a seven-year-old boy when, having been shot in the right arm with an arrow from a passing horseman, he underwent a crude surgery that amputated the arm below the elbow. Actually, he’d been a dreamy sort, even before, much out of rhythm with other members of his tribe.

The amputation left him unfit for stonework, and eventually he became the village’s storyteller — an entertaining sort who, nonetheless, wasn’t exactly felt to be a true community member.

Part of what makes “The Gift of Stones” slow-reading is Crace’s creation of an age and community much different from ours — and, yet, of course, as a human grouping, much like ours.

His descriptions of the village and its life are as sharp and clean as flint, and spare, and simple. Each new event that the community experiences, each new item that enters the villagers’ world, is thrown into black-white relief against Crace’s description of the village.

Indeed, the daughter describes the day of her father’s wounding and amputation and of a visit of horsemen traders, noting, that, in telling the story later, her father “drew for us a portrait of our home and village sent skittish by these uninvited guests, their gifts. Children were conceived that night. Subversive thoughts were aired at the expense of traders, flint, the drudgery of work, the slavery of skill. Maybe, even, blows were struck and quarrels made and mended with a hug.”

It’s a wonderful piece of writing, not least because of Crace’s metaphor “the slavery of skill.”

Who, reading that, elides easily over it and moves on? Anyone? It seems there is no way not to have to stop a bit and ponder how skill can be, is, a slavery. Doesn’t an urban planner, for instance, sometime feel caught, sometime wish to be a biologist instead, or an alderman, a clown?

Again: In one of the father’s stories, he tells of two lovers who run away: “Why not? Chance is a pear. It isn’t ripe for long. It drops. It rolls away. It rots.”

And again: Looking down on his village, the father says, “I knew no sight more sad than that — the sight of that small kempt place, its walls as ordered and as uniform as ribs laid bare, its life as timorous, fettered and discreet as that enjoyed by barnacles on stone. And all around and all beyond, in blues and greys and greens, and fading far away into the whites of distance and of sky, was all the outside world.”

Living off the flint, living off the “gift of stones” of their lore, the villagers were truly “barnacles on stone.”

And these two sentences summarized their moment of blind safety, even while hinting at the breaking of their calm, about to come.