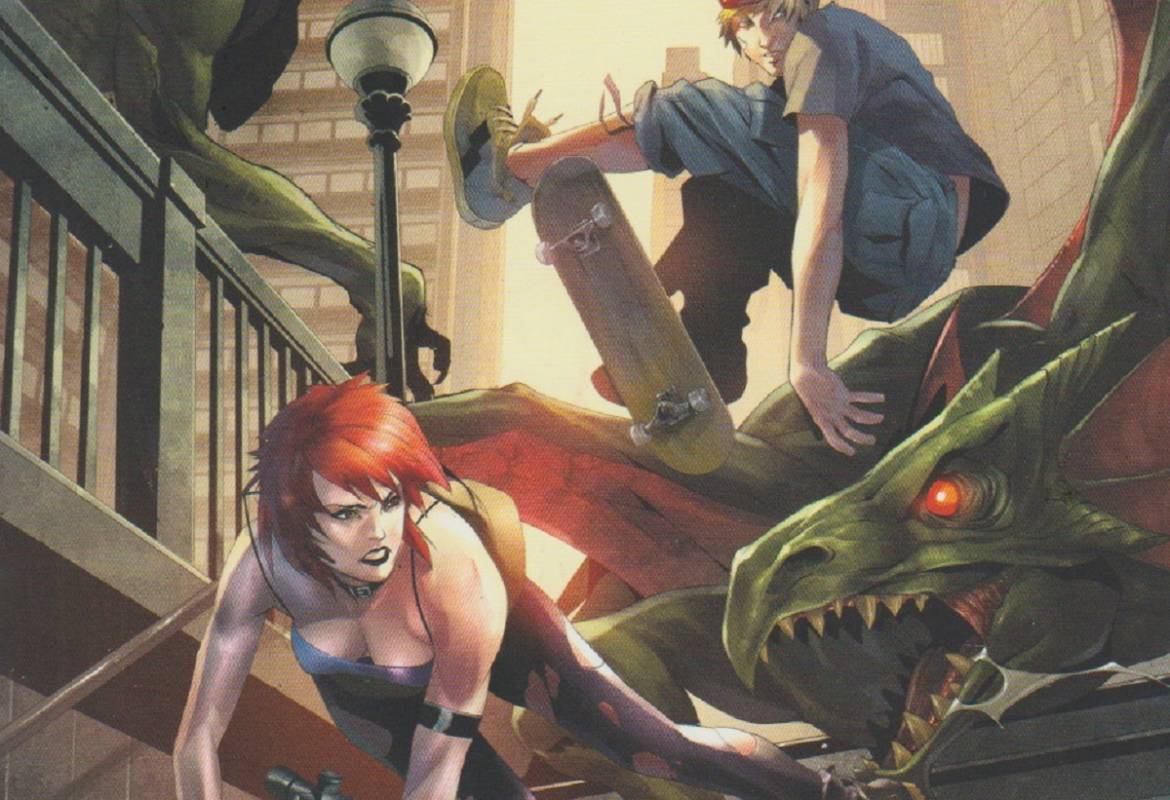 Book review: “The Griff: A Graphic Novel” by Christopher Moore and Ian Corson with Jennyson Rosero

The Griff, published in 2011, is like many another graphic novel, which is to say that it’s like many a megaplex blockbuster.

Tell me if this sounds familiar:

Invaders from outer space (in this case, big flying, fire-breathing dragons) attack the Earth and kill off just about everyone.

The only people left are a bunch of misfits (in this case, a game developer, a guy who worked the makeup counter at Macy’s, a dolphin trainer, a guy dressed in a squirrel outfit, a private first class, and a skateboarder) who set out to save the world.

Along for the ride

What sets The Griff apart is that one of its co-authors is Christopher Moore, the writer of a string of very, very funny novels. The other is Ian Corson, a filmmaker. The guy who did all the drawings is Jennyson Rosero, and he should probably get more credit than a “with.”

In any case, Moore is a very funny guy, but The Griff isn’t all that funny.

It appears from Moore’s foreword and Corson’s afterword that the two had a lot of fun writing the text — essentially, a script for a movie that they don’t expect to be made.

But, because of the nature of the medium, the novel is about images (i.e., the reason Rosero should be a third co-author). It’s about color and shape and interesting perspectives, and it’s about looking. The words are just along for the ride.

Moore, though, is all about words. His humor works through words.

What’s missing is the sort of inner dialogue in which a character will let his or her inner craziness run wild since, well, no one is listening in (except, of course, Moore’s readers).

What’s missing, too, is a lot of the repartee in which the characters sort of compare and contrast their individual crazinesses and react, often with insults, sometimes self-directed.

With so much art and so much plot to get through, there isn’t a lot of room in The Griff for snappy dialogue.

In one case, Steve, the skateboarder, is sitting across from Mo, the game developer, and he says, ”You’re the Game Goddess. I’m not worthy.” To which, she responds, “I think we’ve established that.”

Later, the two come across a thermal-heated pool and, of course, decide to take a bath.

“Stop looking at me like you just got out of jail, you perv,” she says.

“Jeeze, can’t you be a normal girl for once?” Steve responds.

The Griff is perfectly adequate for its genre. It does not, alas, hold a candle to Christopher Moore’s regular novels.