Book review: “The Guarded Gate: Bigotry, Eugenics, and the Law That Kept Two Generations of Jews, Italians, and Other European Immigrant Out of America” by Daniel Okrent

Daniel Okrent’s newly published The Guarded Gate is about immigration.  But, much more, its subject is racism.

Not black/white racism although that does rear its ugly head in Okrent’s rigorously researched, niftily written and maddening book.

No, this is a racism that professed to be able to break the human family into a variety of groups that were called races.  Jews, for instance, were a race.  So were the Italian, and the Greeks, and the Poles.

And every race had its innate traits.

There were any number of ways to slice and dice the world population and its races.

(By the way, there should be quotation marks around the word “races” to indicate that I mean “supposed races” or “races as supposed by the racists,” but my short review would be peppered with such extra marks, so I’ll trust that the reader understands where they should be.  Okrent mentions early that he solved the same problem the same way.)

One method involved splitting Europe into three racial zones.  In the south were the Mediterranean peoples who were thought to be pretty inferior — well, truth be told, very inferior.  In central Europe, you had the Alpine people who were better than the Mediterraneans.

These Nordics — well, they were the darlings of a whole array of Americans (who, by the way, numbered themselves in the Nordic elect) — politicians, authors, academics and experts in eugenics, a science that, from the start, seemed pretty spongy and, ultimately, turned out to be not a science at all, or even a pseudo-science, but prejudice masquerading as science.

These Nordics were blond, blue-eyed, tall, intrepid, wise and, well, everything anyone could want to be.  And they were seen to be incredibly superior to the Mediterraneans, the Alpines, the Jews and all those other races.

So superior that they should be in charge.

At this point, you may have the idea that these Nordics are something like the Aryans, those paragons of everything good for Adolf Hitler, his Nazis and a lot of other Third Reich Germans.

“A perverse form of ‘science’ ”

The full title of Okrent’s book is The Guarded Gate: Bigotry, Eugenics, and the Law That Kept Two Generations of Jews, Italians, and Other European Immigrant Out of America.  That subtitle is very long, but it sums up the book pretty well.

Still, as I said above, this book is a case study in racism — or, if you prefer, prejudice or bigotry or bias or discrimination or injustice.

What I mean, in particular, is that The Guarded Gate is not an objective attempt to analyze the forces and rationale and questions involved in how the United States should address its immigration policy, i.e., how and whether to limit immigration in some way or another.

Okrent makes this clear on page xv, even before the book itself is underway.  In a “Note from (and About) the Author,” he writes that his father’s family of shtetl Jews arrived in the U.S. from central Poland in 1910 and his mother’s Jewish father from Romania in 1922, just before “those gates clanged shut.”  He writes:

“I consequently can’t claim spotless objectivity as I tell the fateful story of how a perverse form of ‘science’ gave respectability to the drastic limits imposed on the number of Jews, Italians, Greeks, Poles and various other eastern and southern Europeans seeking to come to America between 1924 and 1965.”

This “story of xenophobia and immigration policy,” he writes, is one of several.  Other books could be — and have been — written about the sanctions on Asians and on Africans.

This isn’t to say that The Guarded Gate is a rant.  It isn’t.  It is soberly researched and soberly if sharply, incisively, written.

But it also doesn’t take a fully rounded look at the history of immigration questions and policy during this period, foregoing such topics as legitimate arguments for thinking about a reduction of immigration.

For instance, it’s possible that, during that first quarter of the 20th century, someone had reasonable questions and arguments about the number of unskilled laborers who should be accepted into the country.  Conceivably, numbers might have been developed to determine how many unskilled laborers were already in the country, how many were going to be needed and how many new ones might be too many.

I don’t know if anything like this was raised or if anything at all legitimate (i.e., not motivated by bias) was proposed.  But, usually, there are reasonable people around trying to do reasonable things.

Okrent doesn’t go into any part of the immigration debate that was legitimate or reasonable.

He focuses laser-like on racism which, it certainly appears, took up the bulk of the thinking, reasoning and emotions behind the leaders, inside and outside of government, for cutting off immigration from certain parts of Europe.

Let me put it this way:  It’s hard to believe, after reading this book (as well as my own knowledge of American history), that immigration would have been limited in the way it was and to the extent it was except for those acting out of deep prejudice and racism.

To take the unskilled labor example above, a decision by Congress and the President to limit such immigrants across the board, i.e., a reduction that covered the English and the Swedes, as well as the Hungarians and the Italians, might be done in a way that was fair, reasonable and legitimate.

However, as Okrent shows over and over again, the anti-immigration leaders worked every angle they could find until they were able to ensure that those who were kept out under the 1924 draconian law were of the type they despised, disdained and dismissed — the Jews, the southern Europeans and the central Europeans. 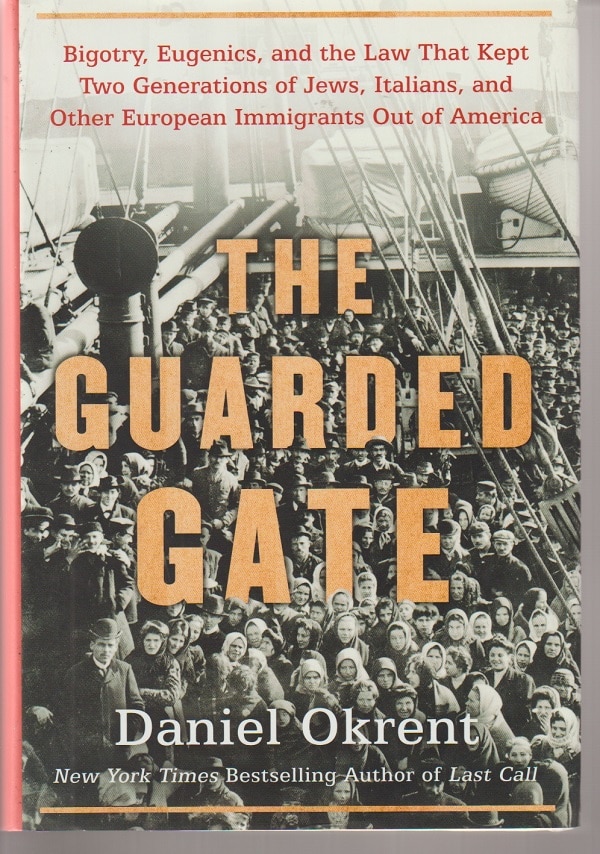 Okrent is often wickedly sarcastic in spelling out the arguments of the racists.  Perhaps, never more cruelly than when he simply quotes them, such as this from J.H. Kellogg (yes, the Corn Flake Kellogg):

“The world had a desperate need, Kellogg said, for ‘a real aristocracy made up of Apollos and Venuses and their fortunate progeny.’ ”

Okrent points out that Kellogg hailed the establishment of a Eugenic Registry as “the beginning of a new and glorified human race” and thought a “new species of man” could be created in just six generations.

“Lords of the world”

I particularly loved Okrent’s frequent references to the way the racists got around the difficult fact that a lot of great world art and literature came from Italy.  It was rooted in a “must-have-been” argument.

For instance, an earlier version of the Nordic label was “Germanic” which Houston Stewart Chamberlain, an Englishman, used in 1899.  In a book that later became beloved by Hitler and Joseph Goebbels, Chamberlain wrote,

“Physically and mentally the Aryans are pre-eminent among all peoples; for that reason they are by right…the lords of the world.”

Ah, but what about all those great Renaissance Italians?  Chamberlain had an answer:

“That Dante is Germanic [is] so clear from his personality and his work that proof of it is absolutely superfluous.”

I find that argument delightfully stupid.

Okrent adds that Marco Polo, Francis of Assisi and Galileo “all made the cut.”

“All of Nordic type”

A couple decades later, the Germanics had morphed into Nordics in Madison Grant’s book The Passing of the Great Race.  Grant, an American, wrote that Nordics — those from northern Europe and Great Britain — were “a race of soldiers, sailors, adventurers, and explorers, but above all, of rulers, organizers, and aristocrats.”

The greatness of the Italians in the Renaissance had nothing to do with the Italians, according to Grant, but with Nordic invaders.  As Okrent writes,

“Anything of value in Italy quite clearly arrived with those Nordic invaders: ‘Dante, Raphael, Titian, Michael Angelo, Leonardo da Vinci were all of Nordic type.’ ”

In other words, if someone was talented, smart or skilled, they obviously had to be — must have been; nay, were — Nordics.

Eighteen years later, H. Fairfield Osborn, longtime head of the American Museum of Natural History and a loud eugenics booster, wrote a letter to the editor of the New York Times which he titled “Lo, the Poor Nordic,” which was also the headline over the letter in the paper.

Okrent calls this letter “a sonorous hymn to the once threatened race that might now be pulled back from the brink of extinction” by the proposed new immigration law.  He adds:

“Nordic virtue was so apparent to Osborn that he found it in the most unlikely (and useful) places, drafting into the clan every southern or eastern European luminary worth claiming.

“By a miraculous combination of presumed genetics, wishful thinking, and a direct lift from Grant, Osborn annexed to his tribe a surprising set of Nordics:  Giotto and Donatello, Kosciuszko and Pulaski, Lafayette and Napoleon, Rodin and Racine and Richelieu.  Using Grant’s exact words, Osborn, man of science, repeated his friend’s dazzling claim that ‘Columbus, from his portraits and from his busts, authentic or not, was clearly of Nordic ancestry.”

Savor that for a moment.

Not only were Napoleon and Pulaski and Giotto obviously Nordic, but so was Columbus, based on his portraits and busts — EVEN IF THEY WEREN’T AUTHENTIC.

It says something for the sheer insanity — the unreasonableness, the unscience of the pseudo-science, the racism underpinning of all of this — of the efforts to keep out certain immigrants that proponents wanted for their own team those members of the inferior races who, obviously, were far from inferior.

In those cases, Francis of Assisi and Napoleon and the others were Nordics.

But then, the even more insane assertion — that Columbus was Nordic because of the images of him WHETHER OR NOT THOSE IMAGES WERE ACCURATE.

In one way, it’s hard to believe that anyone would take anything like that seriously.

But this was a statement from Grant in 1916 and repeated by Osborn in 1924.  These two guys were seen as among the great thinkers of the anti-immigration effort.

Columbus was Nordic, because of the way his images looked — EVEN IF THEY WEREN’T AUTHENTIC.

And they were kept out by wishful thinking — wishful non-thinking — of the worst kind.