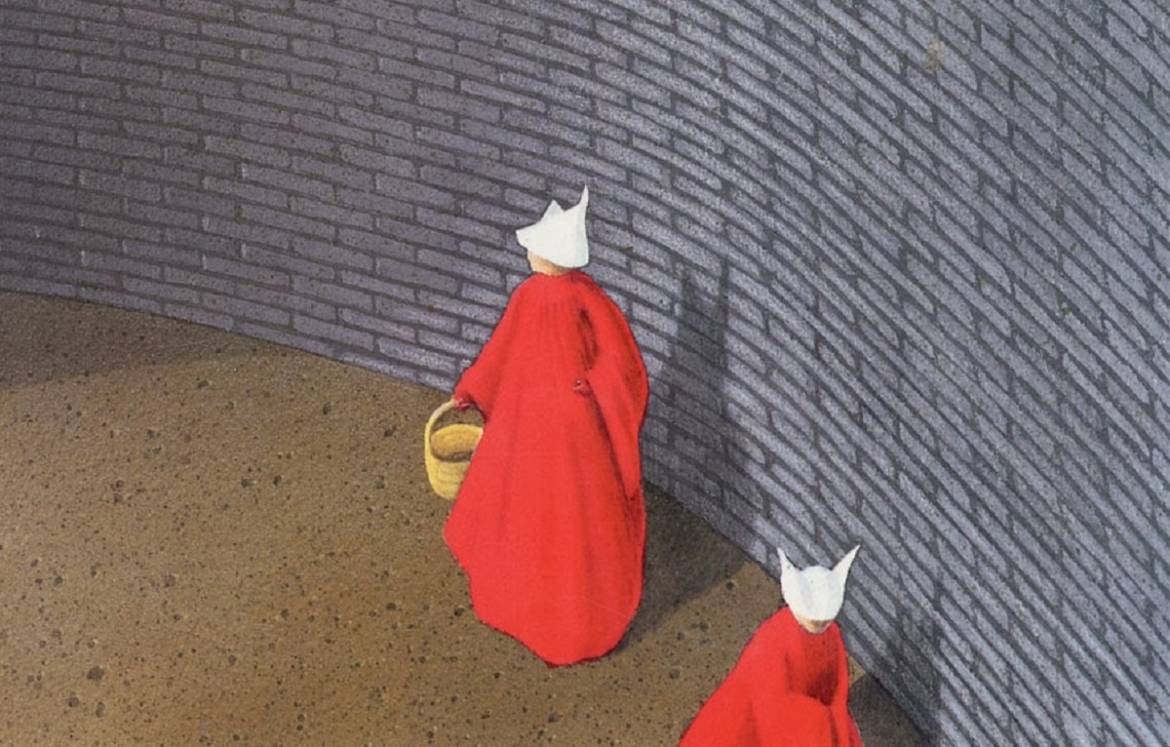 The Women’s Prayvaganzas are for group weddings which is to say arranged marriages.

In this one, there are twenty Angels — that’s a military designation for men who are soldiers in units such as the Angels of the Apocalypse and the Angels of Light — and twenty daughters, dressed in white as if for First Communion, behind white veils, some of them as young as fourteen.

The leaders of this politico-religious American regime, called Gilead, are known as Commanders, and the Commander in charge recites a prayer that is more of an assertion than anything sacral, although it’s framed as something scriptural, deeply meaningful:

“I will that women adorn themselves in modest apparel with shamefacedness and sobriety; not with braided hair, or gold, or pearls, or costly array.

“But (which becometh women professing godliness) with good works.

“Let the woman learn in silence with all subjection. All.

“But I suffer not a woman to teach, nor to usurp authority over the man, but to be in silence.

“For Adam was first formed, then Eve.

“And Adam was not deceived, but the woman being deceived was in the transgression.

“Notwithstanding, she shall be saved by childbearing, if they continue in faith and charity and holiness with sobriety.”

“Blessed are the silent”

There, in a nutshell, is the world that Margaret Atwood has conjured up in her 1986 novel The Handmaid’s Tale.

It is a world in which religious zealots have taken power by assassinating the President and machine-gunning Congress and replacing the nation’s military forces with their own military forces.

They have used the Bible to promulgate a whole new set of laws, and, because the Bible is, well, not zealous enough, have edited the Scripture in ways that suit their goals. For instance, the Beatitudes:

I knew they made that up, I knew it was wrong, and they left things out, too, but there was no way of checking. Blessed be those that mourn, for they shall be comforted.

That’s the narrator of The Handmaid’s Tale, a 33-year-old, five-foot-seven woman with brown hair and viable ovaries.

That last fact is the key, and that’s why her life is as it is.

And it is the way it is because the central effort of the new regime has been to put men in total power and make women subservient in all ways and in all things.

Hence, the line in the prayer: “Let the woman learn in silence with all subjection.”

Hence, the prayer’s revision of the Bible: “For Adam was first formed, then Eve. And Adam was not deceived, but the woman being deceived was in the transgression.” (Obviously, Genesis had it all wrong.)

(The Bible, by the way, is kept under lock and key.)

Hence, the prayer’s insistence on “shamefacedness and sobriety” and “holiness with sobriety” and “silence,” and its warnings against women teaching or usurping power over men.

Hence, the prayer’s assertion that a woman can only be saved “by childbearing.”

The scene at the Women’s Prayvaganzas and the reading of the prayer takes place about two-thirds of the way through A Handmaid’s Tale, and, by this point, none of this comes as a surprise to the reader.

And shipment to the Colonies (basically radioactive dumps) is always a fear, especially for anyone too old or too useless.

And radicals, whether revolutionaries or simply religious dissenters, such as Quakers, find themselves in prison — the one in the novel used to be Harvard University — or executed at the end of a rope on a hook along the wall of the prison.

Some women survive as Marthas, serving as cooks and maids in the homes of Commanders and their Wives.

And then there are the Handmaids, one of whom is the narrator of the novel.

A Handmaid is young and fertile, and her job is to permit her Commander (and his Wife in a creepy ceremony called The Ceremony) to use her body for copulation, in the most sterile and depersonalized way possible, in hopes of impregnating her.

The birth rate, you see, has fallen well below replacement levels because of all the pollution and, well, all of modern life as lived before the coup d’état.

When a pregnant Handmaid goes into labor, the resources of the government go into high gear. She is rushed in a red Birthmobile to the hospital and into the hands of a coven of midwives — no doctors (all male) unless absolutely necessary — while other red Birthmobiles bring other Handmaids to be with her in this important moment, but quietly.

A Handmaid is rotated from one Commander to another, but, if, after three such postings, she hasn’t conceived and borne a child able to survive, it’s off to the Colonies for her.

The narrator’s name before the take-over is never provided to the reader. Like all Handmaids, she is given a name based on the first name of her Commander at her present posting. For this third posting, the narrator’s Commander’s name is Fred.

So, she is Offred.

Atwood’s novel envisions a world that is every feminist’s worst nightmare.

Actually, it would be better to say that it is every human being’s worst nightmare.

She envisions a society that is so controlled that everyone is tightly constrained in their roles.

Among the women, there are levels of pain and oppression, but every single woman is crushed under the weight of the new laws and the new power structure. The Wives, true, are in the comfiest of levels, but theirs is a feckless existence.

Indeed, the Wife of Offred’s Commander is a woman named Serena Jo who was a conservative talking head on television, trumping for family values. But the family values of the Gilead regime turned her life on its head. No longer could she be prominent in her own right. She had been reduced to an appendage of her husband.

Every man, too, is caught in this societal structure which keeps him tightly confined in his job and without hope of even talking to a woman in any real way until and unless marriage is granted to him.

And, as becomes evident as the novel unfolds, even those at the top of the heap, those with power and control — the Commanders — are dissatisfied by the life they are forced to lead.

Offred explains to the reader that she and other Handmaids have chosen their roles although they had few other choices. They wear thick long-sleeved red habits with white-winged bonnets, reminiscent of what centuries of Roman Catholic nuns wore in black, brown and white. (Nuns, though, because of their vows of celibacy are seen by the regime as rebels.)

She is, Offred says, “a national resource.” And she explains that, although rejuvenating the birth rate is the central goal of her existence, the system has been designed to make sure that no incident of attempted impregnation will lead to anything else.

We are for breeding purposes; we aren’t concubines, geisha girls, courtesans. On the contrary: everything possible has been done to remove us from that category. There is supposed to be nothing entertaining about us, no room is to be permitted for the flowering of secret lusts; no special favors are to be wheedled, by them or us, there are to be no toeholds for love. We are two-legged wombs, that’s all: sacred vessels, ambulatory chalices.

In fact, when it comes time for The Ceremony, Offred remains fully clothed above the waist.

The Commander’s Wife lies on the bed with her legs apart, and, with her back to the Wife, Offred lies between the Wife’s legs with her own legs apart and her thick skirt up to her waist. Then, the Commander comes in for the ritual.

I remember Queen Victoria’s advice to her daughter: Close your eyes and think of England. But this is not England. I wish he would hurry up…

Serena Joy grips my hands as if it is she, not I, who’s being fucked, as if she finds it either pleasurable or painful, and the commander fucks, with a regular two-four marching stroke, on and on like a tap dripping.

He is preoccupied, like a man humming to himself in the shower without knowing he’s humming, like a man who has other things on his mind. It’s as if he’s somewhere else, waiting for himself to come, drumming his fingers on the table while he waits…. But isn’t this everyone’s wet dream, two women at once? They used to say that. Exciting, they used to say.

It’s been thirty-one years since Atwood published The Handmaid’s Tale, and it has continued to resonate.

In 1990, the novel was adapted into a movie of the same name with a screenplay by Harold Pinter and starring Natasha Richardson as Offred. In 2000, an opera, composed by the Danish composer Poul Ruders with a libretto by Paul Bentley, based on Atwood’s book and using the same name, premiered in Copenhagen.

An ongoing television series called The Handmaid’s Tale began streaming on Hulu in April, 2017. To date, six episodes have aired, and the series has been renewed for a second season.

The Handmaid’s Tale is more than a science-fiction/speculative novel, and its purposes are more than literary.

It is Atwood’s call to arms to women — and like-thinking men — to fight against the erosion of rights that can happen in an American society in which women remain underpaid and less powerful than men.

Amid the relentlessly depressing details of the life of Offred and the other people in her world, there is a glimpse of what used to be.

It is the saddest moment in the book.

Offred gets to see a Vogue magazine from the 1970s, and the photos of the models are a jagged, ragged, sharp contrast to the world as she now knows it.

There they were again, the images of my childhood: bold, striding, confident, their arms flung out as if to claim space, their legs apart, feet planted firmly on the earth. There was something Renaissance about the pose, but it was princes I thought of, not coiffed and ringleted maidens.

Those candid eyes, shadowed with make-up, yes, but like the eyes of cats, fixed for the pounce. No quailing, no clinging there, not in those capes and rough tweeds, those boots that came up to the knee. Pirates, these women, with their ladylike briefcases for the loot and their horsey acquisitive teeth.

It was a world she had lost. A world she never thought could be lost.