I’m not sure it would be possible for this kind of illustrative work to capture the visceral angst of Lithuanian immigrant Jurgis Rudkus and his extended family, new to Chicago, new to the Stockyards, victims of scams, sharpers and the unbridled capitalist system of that turn-of-the-century era.

It’s interesting that the only movie ever made of the novel was produced in 1914 and often screened at Socialist meetings but is now lost.  Since then, no filmmaker has tried to tackle this sprawling melodramatic story in which just about everything that could go wrong for Jurgis and his family does.

In her 381-page book, Gehrmann, a Hamburg, Germany-based illustrator, rearranges much of Sinclair’s story, trims out a lot and shifts some of the descriptions in the original text into her characters’ dialogue.

Evils that befall the Rudkuses 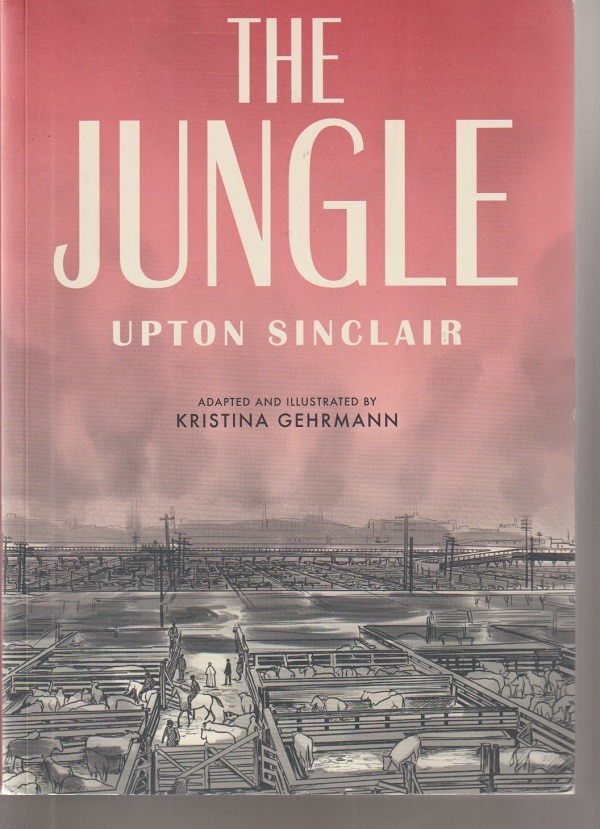 Although Gehrmann’s book is a more condensed version of Sinclair’s story, her litany of scenes in which evils befall the Rudkuses is nearly as lengthy as his — scenes in which:

Important but not great

In some ways, The Jungle is perfect to turn into a graphic novel.  It’s a well-known, widely read important work of American literature, but it’s not great literature.

Sinclair was not much as a prose stylist, and he didn’t seek to be.  His goal was much simpler.

He was a reporter who was investigating the packing industry, and he wanted to use his research to create a story that would convey the oppressive and exploitive system in which lower class people like Jurgis and his family were ground down — that, and promote Socialism as the answer to these sorts of ills.

Sinclair wanted to make a splash with The Jungle, and he did, but not the one he sought.

Instead of his novel leading Americans to rise up against their oppressors, he was chagrined that his bestselling book with its stomach-churning descriptions of the Stockyards factories spurred, instead, a movement for the federal government to crack down and regulate the cleanliness of food processing and the healthfulness of America’s food.

Unlike many graphic novels, Gehrmann’s adaptation of The Jungle has been fashioned with a limited palette of gray, black and white, with occasional splashes of a red-pink-brown maroon.  This emphasizes the depressing lives of Jurgis and his family, and moody images of a cold, sordid Chicago are often the result. But I’m not sure how this will strike those who regularly read graphic novels and expect something a great deal more colorful.

Gehrmann could have chosen to tell this story in color, but how would the real-life gore of the processing plants have compared with the guts and blood of the more violent, science-fiction graphic novels, feature movies and video games? 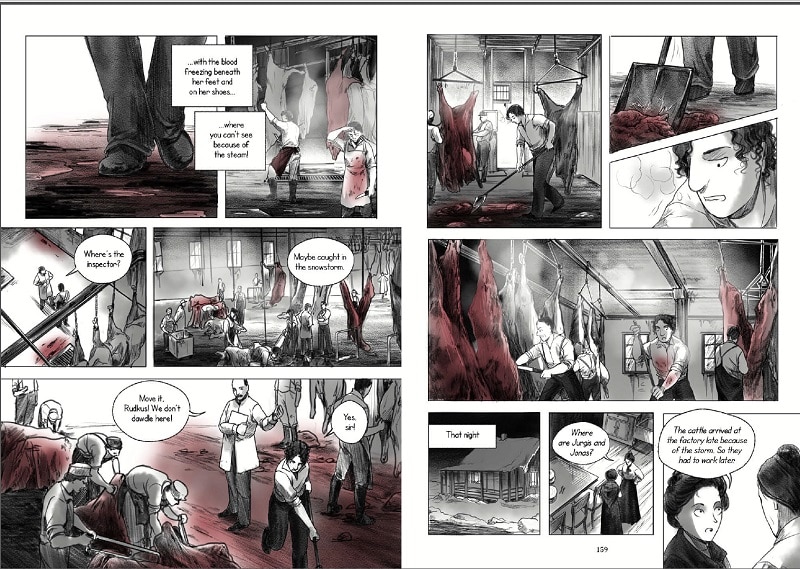 Another conundrum that she faced was her need to tell Sinclair’s story with images.  While Sinclair’s prose may not be timeless, it did carry a lot of water for his story, allowing him, outside the dialogue and plot to trot out his multitude of statistics, political opinions, descriptions, social insights and stories of other people in the factories.

For instance, early in her story, Gehrmann shows the family taking a streetcar to the Stockyards, and one of the children says, “It smells funny here, Mama.”  It’s not easy to deal with odors in an illustrative medium.

That, though, wasn’t a problem for Sinclair, who wrote:

“A full hour before the party reached the city they had begun to note the perplexing changes in the atmosphere. It grew darker all the time, and upon the earth the grass seemed to grow less green. Every minute, as the train sped on, the colors of things became dingier; the fields were grown parched and yellow, the landscape hideous and bare. And along with the thickening smoke they began to notice another circumstance, a strange, pungent odor. They were not sure that it was unpleasant, this odor; some might have called it sickening, but their taste in odors was not developed, and they were only sure that it was curious.”

Another example has to do with a Chicago winter.  Gehrmann doesn’t do much with this section of the novel in which Sinclair waxes eloquent about how brutal the wind and the ice and the cold and the snow can be.

I still remember a scene from my first reading of The Jungle (when I was about 15):

“One bitter morning in February the little boy who worked at the lard machine with Stanislovas came about an hour late, and screaming with pain. They unwrapped him, and a man began vigorously rubbing his ears; and as they were frozen stiff, it took only two or three rubs to break them short off. As a result of this, little Stanislovas conceived a terror of the cold that was almost a mania.”

Finally, another scene that embedded itself in my memory from that first reading.  It’s at the end of a section that described each of the jobs that people did in the Stockyards:

“Worst of any, however, were the fertilizer men, and those who served in the cooking rooms. These people could not be shown to the visitor,—for the odor of a fertilizer man would scare any ordinary visitor at a hundred yards, and as for the other men, who worked in tank rooms full of steam, and in some of which there were open vats near the level of the floor, their peculiar trouble was that they fell into the vats; and when they were fished out, there was never enough of them left to be worth exhibiting,—sometimes they would be overlooked for days, till all but the bones of them had gone out to the world as Durham’s Pure Leaf Lard!”

And Sinclair wondered why sanitary food-processing protections became the national mania after the publication of his novel!

Gears of the profit-making machine

Kristina Gehrmann’s adaptation of The Jungle is beautiful in its way and honorable.

Its message, like Upton Sinclair’s, is terribly immediate today:

Workers have the right to be treated humanely.  They are human beings.  It is wrong to grind them in the gears of the profit-making machine.