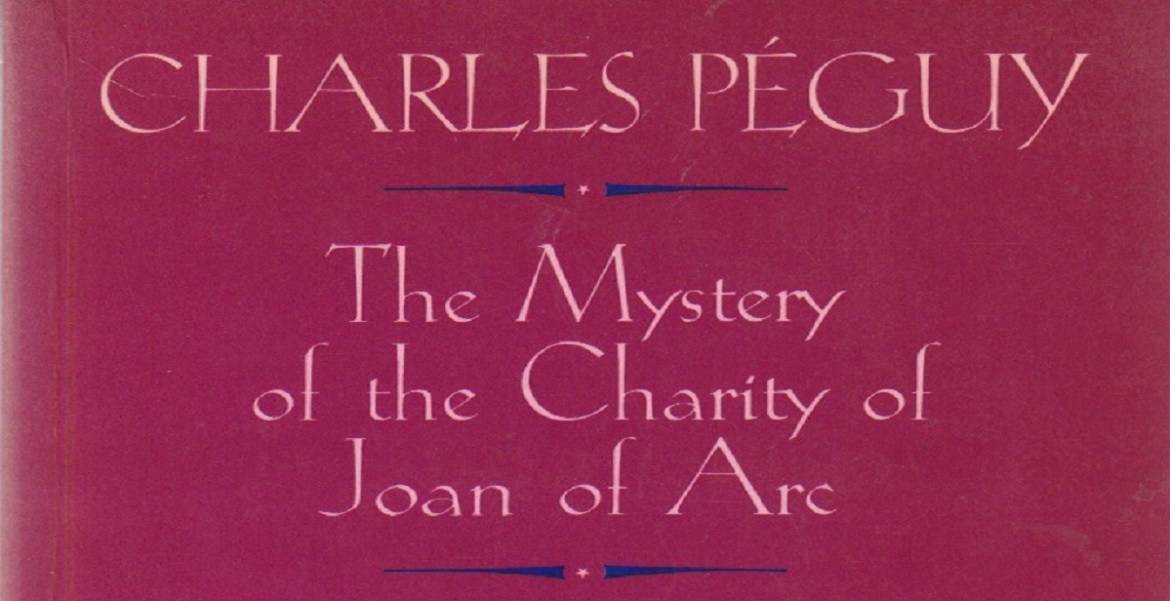 Book review: “The Mystery of the Charity of Joan of Arc” by Charles Peguy, adapted by Jean-Paul Lucet, translated by Jeffrey Wainwright

In Charles Peguy’s play The Mystery of the Charity of Joan of Arc, there are three characters: Joan, her friend Hauviette and a nun called Madam Gervaise.

The year is 1425, and Joan is a seemingly simple teenaged peasant girl, trying to figure out what faith means and what faith requires. She is on stage the entire time. She is joined for the first part by Hauviette and for the second by Madam Gervaise.

Their conversations are theological investigations. Hauviette seems to represent a sort of common sense approach to questions about God and belief. Madam Gervaise appears to represent official Catholic teaching.

The key line in the play, to my mind, is uttered when the nun asks Joan:

Peguy (1873-1914), born of French peasant stock, was a poet, editor and political activist who espoused an idiosyncratic version of Catholicism.

In 1897, he wrote a very long drama Joan of Arc. Thirteen years later, he returned to the subject of the soldier-saint Maid of Orleans when he composed The Mystery of the Charity of Joan of Arc. In 1983, Jean-Paul Lucet adapted and shortened the latter play, and, a year later, it was translated into English by Jeffrey Wainwright.

As presented in the Lucet-Wainwright version, The Mystery of the Charity of Joan of Arc is a mix of prose and poetry that is fascinating as a collection of spiritual insights that may or may not hang together into a coherent understanding of the transcendent in human life. I get the sense that Peguy wasn’t worried very much about coherence. Instead, he seems to have been on fire with faith and doubt, questions and stabs at answers.

Joan, as Peguy portrays her, is a young girl obsessed with many questions. The three most important are:

Why did the disciples of Jesus deny him and abandon him after he was arrested in the Garden of Gethsemane?

Why didn’t Jesus save the damned in Hell?

Why is there suffering, particularly suffering caused by war?

Joan is envious of the great blessing that the disciples and other people of the time had in being able to see, meet and touch Jesus in the flesh. People such as Mary Magdalene and Veronica:

Blessed is she, who in Bethany, in the house of Simon, the leper, having by her an alabaster box of precious ointment, spikenard, anointed his feet.

Blessed is she who with a handkerchief, an ordinary handkerchief, a handkerchief you use for wiping your own face, wiped his face clean, his human face, his pitiful face, that face smeary with sweat, all dirty, mucky, caked with all the muck from the streets.

Yet, despite such a greet blessing, those first Christians did not stand by Jesus during his agony. They did not remain at his side.

Never would we others have run off and left him, never would we have renounced him. That is the truth. We are bad sinners, we are wicked. But we could never have done that.

I don’t like the English, you know that. But even the English would not have let that happen.

What’s particularly striking about the theological and philosophical discussions that Joan has with Hauviette and Madame Gervaise is that Peguy doesn’t stack the deck.

Often, a writer who presents a discussion such as this will make the secondary characters into paper tigers, trotting out arguments that the central figure is able to easily demolish. Peguy isn’t like that. His secondary characters are thoughtful, sensible and insightful.

For instance, it’s hard not to like Hauviette’s comments about what it means to save one’s soul:

Similarly, here’s her delightful take on how she would react if told that she was about to die:

And when I got to Heaven I’d say to the good Lord: Our Father which art in Heaven, I am little Hauviette…You’ve called me back a bit early, seeing as I was still a very young girl. But you are a good father and you know what you are doing.

Talk about living in the present, and trusting in the Lord.

Some of Peguy’s best poetry, featuring his characteristic Philip Glass-like repetition, is put into the mouth of Madame Gervaise. Here, for instance, is an excerpt from the nun’s extended description of Mary’s sufferings during the Passion and Crucifixion of Jesus:

As she climbed Calvary as well,

Among the crowd, a bit to the back,

To the top of Golgotha.

To its top ridge.

Right to the very top.

When now he was crucified

Nailed by his four limbs.

The King of Light.

In that place called Golgotha.

The place of the Skull.

And here is a portion of Madame Gervaise’s description of Jesus on the cross:

His heart was burning within him.

His heart devoured him.

His heart burnt with love.

His heart devoured by love.

His heart consumed by love.

Yet, for all of the love and faith that she has in Jesus, Joan is unable to let go of her obsession with the souls of the damned. “What,” she asks at one point, “is the price of all the souls there have ever been and ever will be?”

Whatever the price, she is willing to pay it herself.

If it will save from the fires of Hell

The flesh of the damned mad with their hurt

Leave Lord my flesh with the human hurt,

Lord keep my flesh in this human hurt.

If it will save from the nought of Hell

Souls of the damned that are maddened there,

Leave Lord my soul with this human hurt,

Leave it to live in this human hurt.

Why? As Madame Gervais asked, why does Joan want to be more of a savior than Jesus?

Because she and everyone else alive play a role in the suffering in the world and in the damnation of souls to Hell — by permitting evil, such as the evil of war, to exist. Joan asserts:

Do you know, Madam Gervaise, that we who see all that happening before our eyes and don’t do anything about it except for useless charity…as long as we don’t want to kill war we just go along with it. We let the soldiers do what they want, so we, you, can’t escape this, we are torturers and we are damners of souls as well.

Just to go along with it is the same as sticking in the knife yourself.

It’s cowardice. It’s collaboration. So how can Joan pray when she knows souls are damned to hell, in part because of her inaction? She tells God:

I can’t keep on praying. The words of the prayer seem smeared with their blood, the blood of those going to Hell, and my soul is driving mad thinking about the damned. Thinking about anybody being damned to everlasting Hell makes my soul kick out at you.

Her solution, in the end, is to pray and do battle. To act to “kill war” by waging war — to act to stop evil by going to battle against evil as embodied in the invading English.

Four years after writing this play, Charles Peguy joined the French army to fight against the invading Germans and died on the front lines, shot in the forehead.