Some of Andre Norton’s fans consider The Zero Stone, published in 1968, to be one of her best books.

I didn’t find it all that compelling although it is distinctive in a couple ways.

First, this is the first Norton novel that I’ve read which is narrated in the first person by the central character, in this case, Murdoc Jern.

Of course, she wrote more than 200 novels during her very long career before dying in 2005 at the age of 93, so, for all I know, there might be many others with a first-person narrator.  I’ve read a lot of her stuff, though. 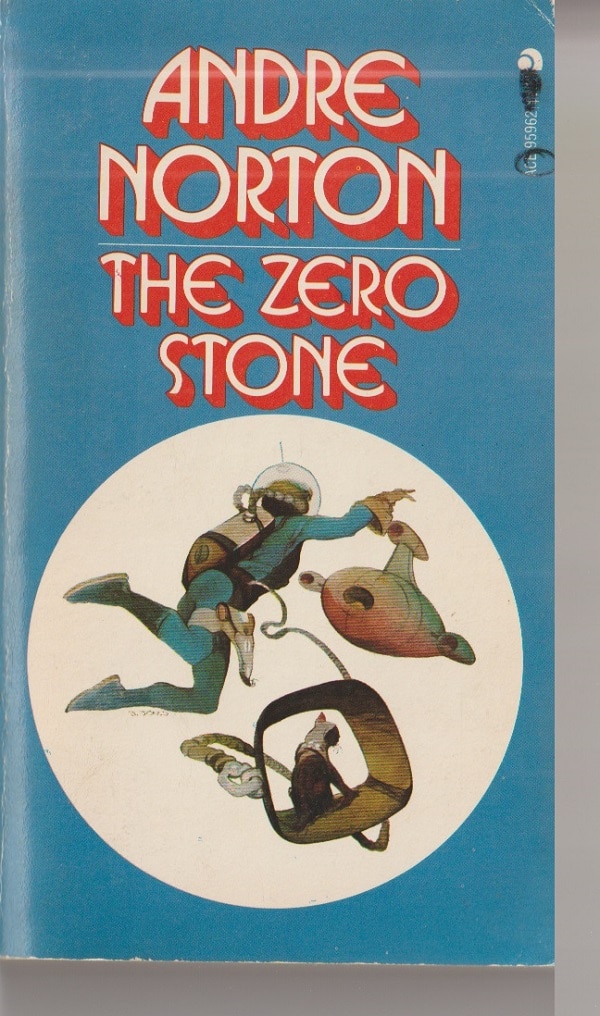 This type of narrator brings a much greater immediacy to the opening of the book in which Murdoc is being hunted at night on a planet with no moons:

“While my fear urged me to run, prudence argued that I take only careful step after step, pausing to feel out the way before me….My outstretched fingers to the left slid along sweating stone, picked up a foul burden of stickiness as they passed.  I had the laser in my right hand.”

As that quote begins to indicate, The Zero Stone has many of the tropes are often to be found in Norton’s books — bad smells and sticky things are bad; Murdoc is an orphan (and one who had been adopted, so a double orphan); the story takes the characters from one odd planet to another to another and so on; there is evidence of a much older, much more accomplished civilization called the Forerunners; and Murdoc bonds with an animal sidekick.

Actually, Eet, the sidekick, isn’t an animal and isn’t a sidekick.

He is an intelligent being who was quiescent for who knows how long in a stone-like seed on a planet where Murdoc is taken.  The ship’s cat Valcyr ingests the seed somehow and, after a very short pregnancy, gives birth to Eet.

Murdoc thinks Eet is an animal but is quickly disabused of that idea by Eet who is more intelligent, knowledgeable and skilled than the human.  Indeed, the two communicate by telepathy of which the tiny creature is adept.

All that makes Eet an unusual character for Norton — and he’s even more unusual in the way he displays arrogance and irritates Murdoc.  This sort of inter-character friction doesn’t happen much in Norton’s books, especially between the central character and an alien.

The interaction of these two make The Zero Stone pretty interesting, but the plot was, to my taste, too complicated and coincidence-ridden. 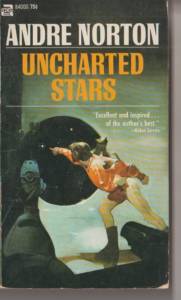 Still, I discovered after I finished the book that there was a sequel Uncharted Stars, published in 1969 — a book that features the same first person narrator and one that  I already have on my shelf but have not yet read.

It says something, I think, for The Zero Stone that I’m now planning to give Uncharted Stars a read sometime sooner rather than later.

Let’s see what Murdoc and Eet — and Norton — have in store.