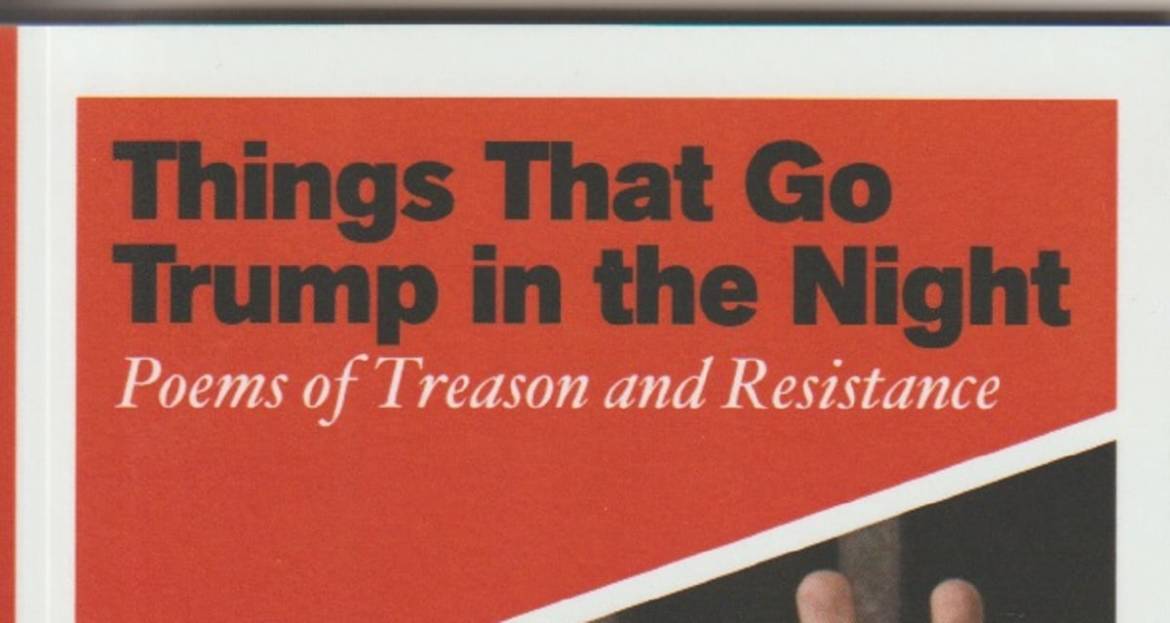 Book review: “Things That Go Trump in the Night: Poems of Treason and Resistance” by Paul Fericano

The final poem in Paul Fericano’s new biting, silly and fittingly sophomoric poetry collection Things That Go Trump in the Night: Poems of Treason and Resistance (Poems-For-All Press, 90 pages, $7), is titled “TRUMP CHANGE,” and it has a single line:

what’s in your wallet?

This is a play on Samuel L. Jackson’s ubiquitous commercials for a bankcard company with that punchline — a Jacksonesque-thundering assertion that, if you have the card of another company, you are guilty of financial stupidity and of being a seabottom-scouring loser.

When it come to the application of this line with its subtext to an American electorate that, two years ago, voted in as President of the United States Donald J. Trump, well, if the shoe fits….

For his 42 poems here, Fericano has mined the full range of culture, from pop to historic, as in his use of the traditional Scottish prayer that is likely to resonate with most readers, even if those not experts on Scottish theology.  The original reads:

From ghoulies and ghosties

And things that go bump in the night,

Kinda cute if you don’t believe in any of that sort of stuff….or pretty creepy if you do (and, maybe, the proliferation of ghosty, ghouly movies is a measure that many Americans do).  In any case, here’s Fericano’s adaptation that serves as the Invocation and first poem in his book:

and things that go trump in the night.

In a poem “CHARACTERISTICS AND EXAMPLES OF A TRUMP HAIKU,” Fericano specifies, among a number of items, that the haiku must have a three-line format with 11 syllables in a 9-1-1 pattern and must feature “exaggeration (that) predominates over facts and veracity, with meaning distorted to cause reader confusion.”

The examples he provides aren’t actual quotes from the President but seek to capture the flavor of that chief executive’s tweets and quotes, such as:

The putrid smell of the swamp is sweet.

Wow! The sky is raining rockets! Made

Because these are poems about Donald Trump, there is much in their wording and phrasing and diction that is purposely banal.

There are moments, though, when Fericano splashes a metaphor or simile on the page that gets the reader to say, yeah, that’s the guy.

Such as when he writes the Trump “sets his watch to howdy doody time.”

Or when he observes that the President’s complicity with urinating prostitutes “is the grey wool of old goats.”

For me, the key line in the book may be when Fericano compares Trump to “a toilet that runs all night” — although another one that’s really good is in a poem titled “THE NRA REMINDS YOU TO DEFEND THE SECOND AMENDMENT” and is one of five, if you’ll excuse the term, bullet points: “Keep your trump cocked and ready for any crisis you create.”