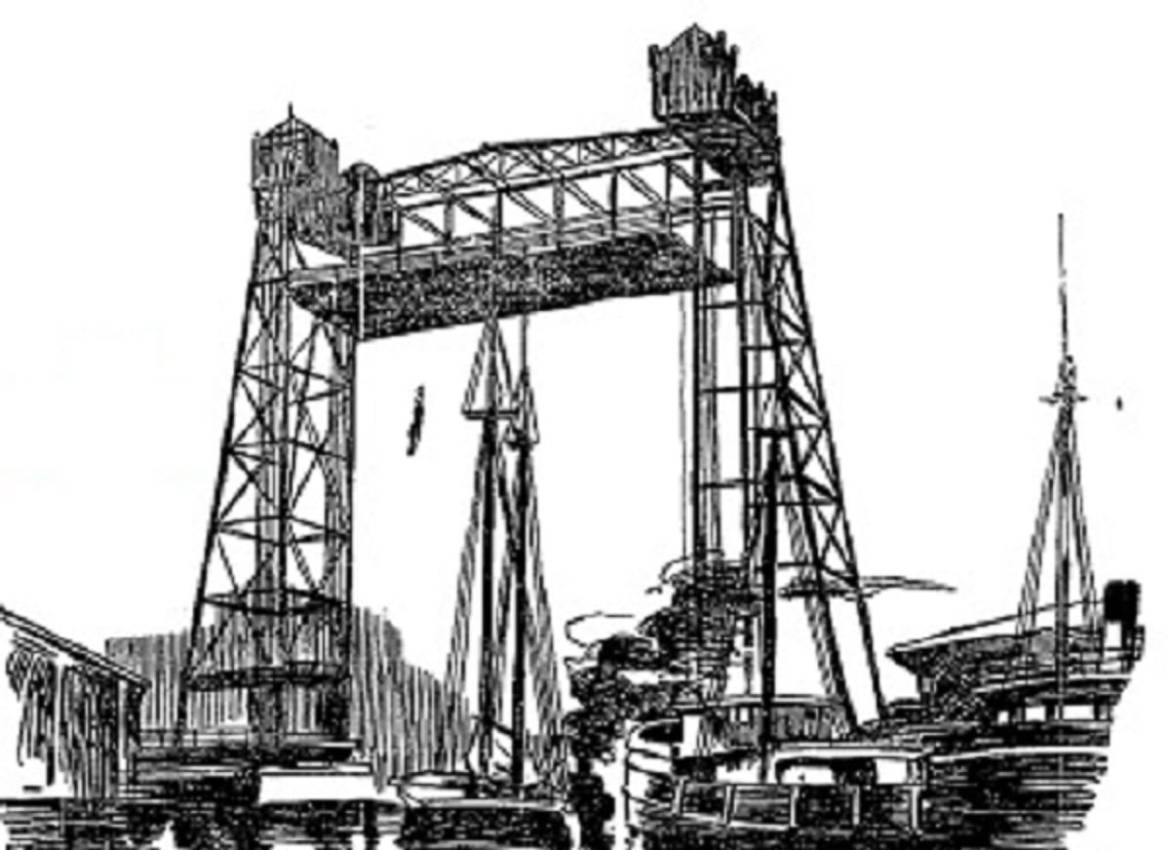 Chicago History: A Dive into the “Inky Waters” of the Chicago River

Each year, through myriad government efforts, the Chicago River gets cleaner although no one would call it “clean.” Nonetheless, as polluted as its water remains, the river used to be much, much, much worse as a story from more than a century ago illustrates.

It was 4 p.m. on a Monday afternoon, Labor Day, September 6, 1897, when the lumber steamer S.K. Martin, heading southwest in the South Branch of the Chicago River, signaled for the raising of the Halsted Street Bridge, just north of Archer Avenue. This bridge, designed by J.A.L. Waddell, was known as “the red bridge,” the gateway to the hardscrabble neighborhood of Bridgeport.

As the tender operated the machinery, the bridge platform — a 130-foot-long, cedar-block-paved section of Halsted Street — began to rise slowly between two metal towers, like an open-air elevator. Standing on that pavement and taking the ride up were 22-year-old George William Clarke and a young woman identified by the Tribune as “his sweetheart Miss Kinzie.” Also on the platform were two policemen from the nearby Deering Street Station.

Just as the platform was reaching its full height of 160 feet above the turbid river, Clarke, a professional diver, began whipping off his outer clothing until he was down to his tights and a close-fitting sleeveless shirt. He moved as if to leap off the platform’s west rail, just as the steamer finished passing below, but the two police stepped in to block him. So, he turned and, “at a keen run,” dashed for the east rail.

“He sprang to the rail”

“He sprang to the rail. the Tribune reported. “and with a wave of his hand to Miss Kinzie jumped forward and upward, turned and went head first as straight and true as a bolt from a crossbow toward the inky water below.”

It was, the Tribune wrote, a “desperate dive,” one that shocked bystanders who thought they were witnessing a suicide.

But, no, Clarke wasn’t looking for oblivion. He sought acclaim.

“Beats High Dive Record,” shouted the Tribune headline the next day, continuing with subheads that read: “C. W. Clarke Takes 160-foot Header Off Halsted Bridge: His Sweetheart Is With Him When He Makes the Fearful Leap from the Elevated Platform of the Structure into the Foul Chicago River…” An accompanying sketch showed Clarke in his sleeveless shirt, looking like an all-American hero with a forthright glance and a thin, though manly, moustache.

Hitting the “foul” river water — at most, 20 feet deep — Clarke disappeared from view but immediately popped back to the surface, yelling, “All right.”

He swam to the riverbank where he was helped ashore and then hosed down by the bridge tender — apparently so no one else would have to come in contact with the “inky water.” Indeed, the Tribune reported that the young man had no injuries, aside from whatever intestinal difficulties he might suffer “from having swallowed a mouthful of some of the foulest water in the world.”

This characterization of the river water may have been true. From the beginning of the settlement that became Chicago, the river had been used literally as an open sewer.

The unsightly and unseemly were routinely dumped into its waters, and, since 1861, when the city’s new sewer system, the first of its kind in the nation, was completed, excrement and other waste emptied directly into the waterway. Perhaps it was no coincidence that, a year later, a letter-to-the-editor in the Tribune complained that the river was “so odorous” as to be a model for the River Styx which, in Greek mythology, was the dividing line between the Earth and the Underworld.

Six months later, a packing-house executive, identifying himself only as “Slaughter House,” wrote a letter-to-the-editor to the Tribune to complain that people shouldn’t worry when they saw the Chicago River running red with blood. Blood, he argued, was “a purifier rather than the reverse.” In addition, he asserted that the “fact that the water is colored with blood is no evidence that a large quantity of blood is run into the river….A very small quantity of blood will color a very large quantity of water. But color is nothing as long as the blood does not decompose and become offensive.”

“The filth and blood and even solid matter”

In 1877, an editorial in the newspaper discussed the disgusting result of a winter thaw on the frozen river:

“Under the ice there had been accumulating since last November the sewage of the whole city, and also the filth, and blood, and even solid matter surreptitiously placed there by slaughter-houses and distillers. This vast deposit, relieved of its frozen crust, would soon, under the rays of the summer sun, have liberated its noxious odors and fetid gases, carrying disease and discomfort into every dwelling.”

In this case, though, the newspaper noted, a quick thaw has resulted in a flash flood down the river, flushing all that noxious material (and its smell) out into the lake where it would be out of sight (and smell) and out of mind — as long as it didn’t reach the city’s water pumping stations and taint Chicago’s water supply.

What was worse for Clarke was that passing below the Halsted Street Bridge wasn’t just the drainage of city sewers but also the blood, grease and other noxious refuse of the Union Stockyards that oozed out of Bubbly Creek (officially the South Fork of the South Branch of the Chicago River). In The Jungle, published nine years later, Upton Sinclair noted that the South Fork got its nickname because it actually did bubble from “the grease and chemicals that are poured into it [and] undergo all sorts of strange transformations…”

Clarke, though, wasn’t the only person entering the water in that area. Two years later, the Tribune published a light-hearted story about “hundreds of small boys [who] fairly live in the black waters of the South Branch during the hot season.”

The story was headlined: “Swim in Chicago’s Oily River: Gamins Plunge Into the South Branch, After They Have Carefully Swept the Surface with a Broom.” Accompanying the story was a drawing that a boy with a broom sweeping together vague objects in the water. Despite its tone, the article also noted, “Many of the children have died of typhoid fever and contracted diseases from constant swimming in this sewer.”

The water under the Halsted Street Bridge would become somewhat cleaner — although far from clean — in January, 1900, when the river’s south branch was linked with the Chicago Sanitary and Ship Canal, sending the Bubbly Creek blood, grease and chemicals southwest instead of out into Lake Michigan.   But that was more than two years in the future.

Hosed down and coping with the effects of swallowing the “inky” river water, Clarke was dutifully arrested by the two police officers. They put him into a patrol wagon heading to the Canalport Avenue Station. There, he was booked for disorderly conduct and held until his bail of $200 was posted. The charge was later dropped.

This essay was original published in the Chicago Tribune on 9.30.17.