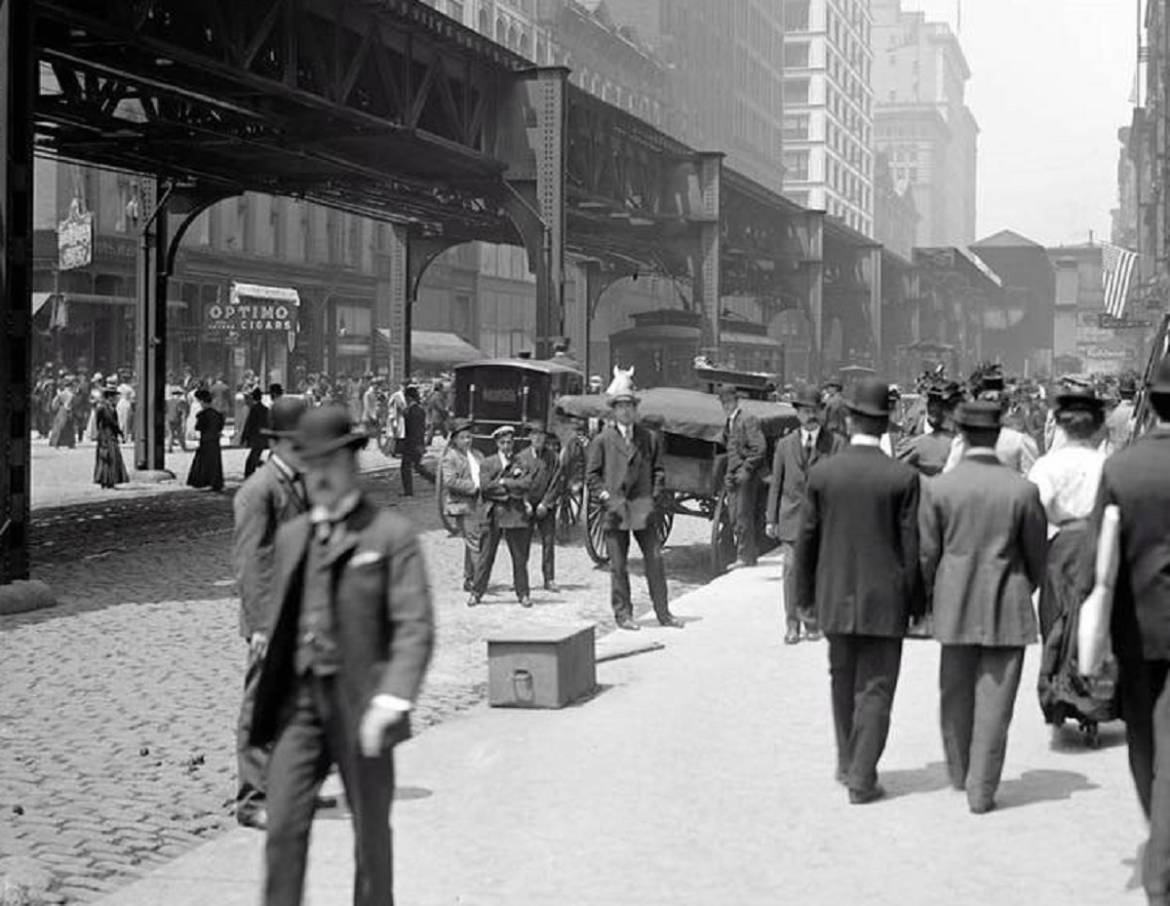 Chicago History: The elevated Loop, a landmark in everything but name

The 1.8-mile-long elevated railroad Loop, which turns 120 on October 3, is not an official Chicago landmark — but it should be.

Over the past 40 years, Chicago has publicly affirmed that some 200 buildings, sites, objects and districts as important to the city for historical, artistic and other reasons. Somehow, though, city leaders have overlooked the elevated Loop which, I would argue, is more important than most, if not all, of those designated landmarks.

Enclosing 39 downtown blocks, the elevated Loop is lost amid the skyscrapers that loom above it. Yet, no other structure in Chicago’s history has had as important an impact on the city.

Throughout much of its history, it was viewed by many as simply ugly. Indeed, even before the elevated Loop was finished and often in the decades that followed, there were calls for it to be razed. The last push to tear it down came in 1978.

During those years, none of Chicago’s public officials, business leaders and promoters talked about elevated Loop as anything more than a way to get people into and out of downtown. And it’s certainly been an essential transportation system for the city.

Yet, for more than a century, the elevated Loop has also anchored Chicago’s downtown, concentrating immense real estate wealth in a densely packed quarter-square-mile and strengthening the central business district against the battering of major societal changes, such the rise of suburbia, that victimized most other major cities.

The elevated Loop, which began operation in 1897, was willed into being by the often-demonized entrepreneur Charles T. Yerkes, a man of brilliance and amorality who knew how to use deceit, bribery and blackmail to get what he wanted.

Back then, its rectangle of tracks over four Chicago streets enclosed the area that was the city’s downtown — an area that, a close reading of contemporary newspapers shows, soon came to be known as the Loop district and, within a decade or so, simply as the Loop.

People began calling the downtown area the Loop because the elevated structure defined it as the city’s common ground, shared by all Chicagoans.

Chicago has always been a city of sharp divisions — a city of battling neighborhoods, of competing ethnic groups, of the very rich and the very poor, of saints such as Jane Addams and sinners such as Al Capone. It’s even divided by baseball.

It’s a three-sided city — South Side, North Side and West Side. At the end of the 19th century, each of those three sections had its own house-numbering system completely unrelated to the systems in the other two sections.

And, prior to 1897, each had its own elevated railroad terminal just outside the downtown area. Upon reaching that final stop, riders would have to get out and walk or find a street-level ride into the central business district.

In fact, if the elevated Loop hadn’t been constructed — and it was never a sure thing — the downtown might have split into three smaller business areas, each focused on one of the elevated terminals on the north, west and south sides.

Belongs to every Chicagoan

With the construction of the elevated Loop, the city’s downtown — its Loop — became the one spot that belonged to every Chicagoan.

Riding the elevated trains from their humdrum neighborhoods, they arrived in the Loop with its glitz of power, entertainment and plenty spread out before them. Chicagoans identified with their home neighborhood — and with the Loop.

In 1952, Manhattanite A.J. Liebling wrote, with a kind of amazement, about the great affection that one Chicago friend had for the Loop: “He loves that grim rectangle, bounded in its iron crown of elevated-railroad tracks, and says that during the war, when he was overseas and he thought of Chicago, it was always of the Loop in the rain….”

Even through the hard times in the 1970s, the Loop remained home of one of the world’s most important financial districts as well as a one-stop-shopping concentration of city, county, state and federal government services and courts.

And so it remains today, even as it undergoes a renaissance of new residential towers and a boom in college classrooms and student housing as well as a growing wealth of entertainment and dining opportunities.

After dodging the wrecking ball in 1978, the elevated Loop increasingly has come to be seen as a unique and attractive part of Chicago’s character. It’s a tourist draw and a singular Chicago experience.

Without the elevated Loop, Chicago would have been just another Rust Belt city with a rundown and discarded downtown.

With it, Chicago is Chicago.

And, if it’s not a landmark, I don’t know what is.

This essay originally appeared in the Chicago Tribune on 9.25.17.