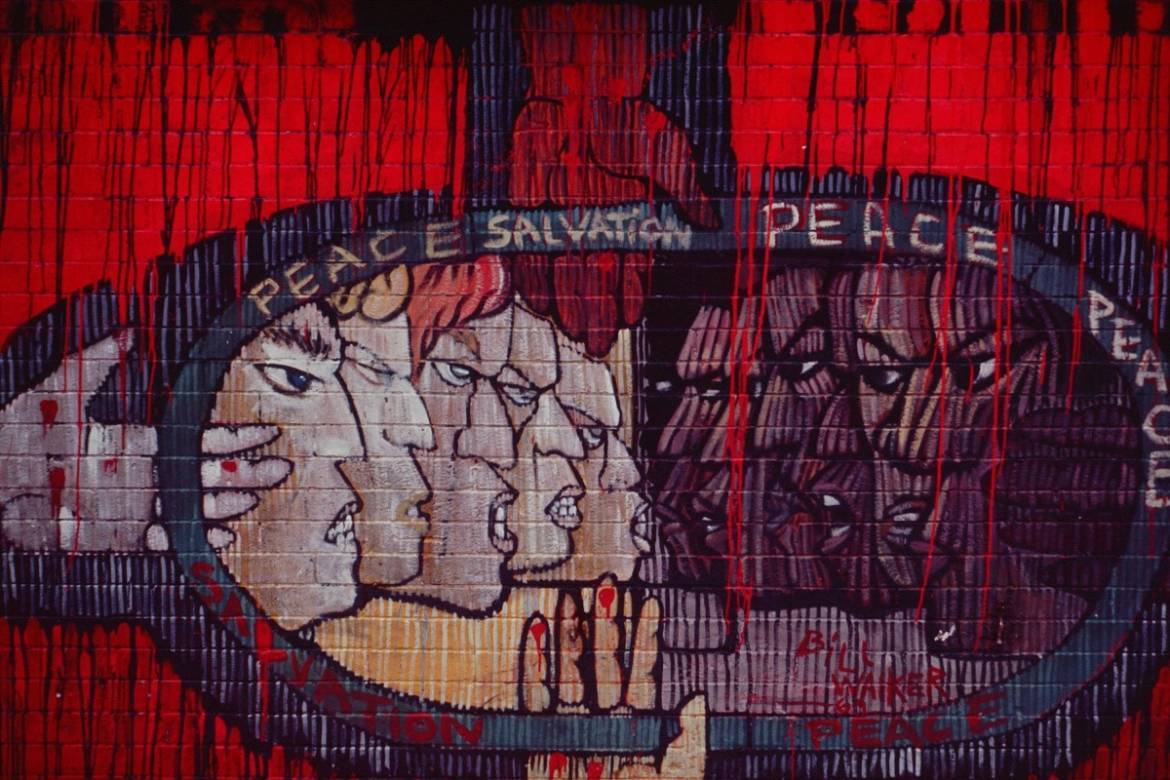 Chicago history: The guerilla mural that was The Wall of Respect

The community-based outdoor mural movement, now international in scope, began half a century ago when a collective of African-American artists created “The Wall of Respect” on the side of a two-story tavern building on Chicago’s South Side.

That artwork, created in August, 1967, featured the images of more than 50 black heroes and was a revolutionary act that echoed the Black Power rebellion in the streets.

“It was a guerilla mural,” said artist Jeff Donaldson in an interview a few months before his death in 2004. “It was a clarion call, a statement of existence of a people. It became a rallying point for a lot of radical things.”

An exhibit at the Chicago Cultural Center

The Wall is the subject of an exhibit that opened February 25 at the Chicago Cultural Center at 78 E. Washington St. and will continue through July 30. I visited the exhibit recently, and, as you can see, there’s a half-size version of The Wall of Respect covering an entire wall of one room.

This image looks real enough that you can easily take a photograph that makes it seem like you’re standing in front of the real thing.

Photos from the exhibit at the Chicago Cultural Center

Asking permission of the tavern-keeper

Over the past five decades, murals have become a key element in community-building in most American cities. A way for a neighborhood to say: Here we are, and we’re proud of it. A vital “statement of existence of a people.”

That was certainly the impetus for that radical act that originated the movement.

There were stories later that William Walker, the muralist who conceived the idea of “The Wall of Respect,” had gotten an OK from the owner of the building at the southeast corner of 43rd Street and Langley Avenue, a poor Chicago neighborhood, nearly 100 percent African-American.

Not true, said Donaldson who, with Elliott Hunter, created the jazz section of the mural.

“We didn’t have permission to paint it,” he said. Walker talked to the tavern-keeper on the first floor who responded that he had no say over the building’s exterior. The owner, “a white absentee landlord,” eventually saw the work after it was completed, Donaldson said, and “recognized it made his property more valuable.”

At the dedication of the mural on Aug. 27, 1967, Pulitzer Prize-winner Gwendolyn Brooks, who lived nearby, read a poem which included the lines:

It is the Hour of tribe and of vibration

the day-long Hour. It is the Hour

of ringing, rouse, of ferment-festival.

In another poem read at the dedication, Don L. Lee, who later changed his name to Haki Madhubuti, called the two-story artwork “the mighty black wall.” And he added, “white people can’t stand/the wall.”

A detail from the Wall of Respect (Photo: Mark Rogovin)

The work of art was unsettling for the likes of J. Edgar Hoover’s FBI and Mayor Richard J. Daley’s City Hall.

The site became a magnet for Black Power rallies, speeches and art festivals. That made authorities even more nervous

So, in 1971, few were surprised that, after a fire inside the building, the city moved quickly to demolish the structure.

Now, half a century after it was painted and forty-six years after it was destroyed, The Wall of Respect is being celebrated by the City of Chicago.

Visit the exhibit and get your photo taken with a replica of this long-gone piece of Chicago’s history.

A somewhat different version of this essay was published in April, 2011, on the website of the Institute for Comprehensive Community Development of the Local Initiatives Support Corporation (LISC).