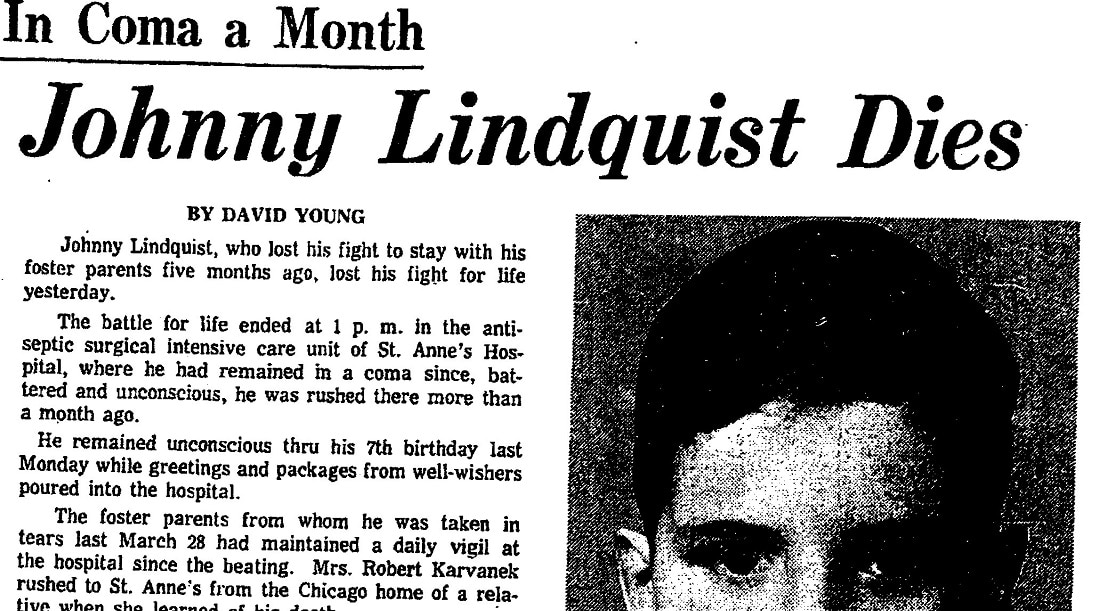 For the last month of his short and tragic life in the summer of 1972, he was known to Chicago simply as Johnny.  Forty-five years ago today, he died.

He was the West Side six-year-old who’d been beaten and kicked and slammed into a coma by his father, and his plight touched the hearts of those in the Chicago region and around the nation, and prompted a vigil of love, praying for his recovery.

His story filled Chicago’s four daily newspapers and the radio and television newscasts. And it changed the law.

For nearly half a century, Illinois children and those in the rest of the United States have been better protected against abuse and neglect because of what that young boy went through.

His name was Johnny Lindquist. He was born in Chicago to William and Irene Lindquist on August 28, 1965. His mother contracted tuberculosis, and, for the first years of his life, Johnny shuttled back and forth between his parents and a series of foster homes.

In 1969, a Catholic Charities caseworker reported to a Juvenile Court judge that, by the end of one recent visit, Johnny was “covered with bruises and scars inflicted by both parents.” A month later, on August 1, Johnny was sent to live on the South Side with Robert and Florence Karvanek. He joined another foster child a few years older named Robert.

The Karvaneks built their lives around the two boys and soon moved to a farm in Tigerton, Wisconsin, because, Robert Karvanek said, it was “better living.”

For Johnny, life on the farm with its rolling meadows, a stand of woods and a trout stream was an idyll. There was a horse for him to ride, a tractor he learned to drive and a go-cart.

In December, 1971, his caseworker arranged for Johnny to spend a weekend with the Lindquists. He returned describing the household as “a madhouse.” Nonetheless, the presumption at the time of family service agencies was that a child belonged with his or her birth family. And, three months later, the Catholic Charities caseworker told the Karvaneks that Johnny would have to go back to live with the Lindquists.

“I told him to please, please, be good,” his heart-broken foster mother said. But Johnny cried and threatened to run away from the Lindquist household.

On March 28, five months shy of his seventh birthday, Johnny was back with William and Irene Lindquist — and, in his childish way, he rebelled, wetting his pants and asking over and over again to be returned to the couple he called “Mom” and “Dad.”

Testimony at the separate trials of the couple indicated that both soon began abusing the boy: Irene Lindquist hit him over the head so hard with a paddle that it cracked. William Lindquist punched Johnny with his fist.

Police later determined that, working together, the couple tied Johnny’s hands together and his ankles together with a plastic clothesline and stretched the line over a door so that the boy’s hands were over his head. He was left this way about eight hours a day for three days. The Lindquists stopped the practice because Johnny’s wrists began to bleed.

On Friday, July 28, the Lindquist family which included four siblings moved into a second-floor apartment at 4729 W. Erie St. It was the worst day of Johnny’s life.

William Lindquist’s sister testified that, when she brought sweet rolls to the family that morning, Johnny “looked kind of bruised up, not too bad, but I was going to ask my husband…I was afraid for the boy. But then it was too late.”

Another of William’s sisters testified that, later that day, “Irene hit Johnny on the back with a broom handle. She then had Johnny kneel in the corner of the living room with a towel over his face so she wouldn’t have to look at his ugly face.”

Around 5 p.m. that day, William Lindquist was drinking beer on the first floor when his wife called him upstairs. “We didn’t hear anything,” one of those present later said. “The next we knew the police were here.”

Lindquist met the officers out in front with his boy’s body in his arms, wrapped in a blanket. He had just called to say, “My name is Lindquist. I got a kid. I just beat him up. I want a police car to take him to the hospital right away.”

At the police station, Lindquist told investigators that Johnny had wet his pants, and he “saw red and began punching Johnny.” Later, at his trial, the father testified that the beating was inflicted by his wife.

For more than a month, Johnny lay in a coma at St. Anne’s Hospital. He turned seven in his hospital bed.

St. Anne’s was flooded with get-well cards for Johnny and received so many phone calls that they all began to be transferred to a designated “Johnny condition” staffer. Again and again, the worker said into the phone, “There is no change in Johnny’s condition. He is still critical. The prognosis is poor, but he is showing a tremendous will to live — a tremendous fight for life.”

That will to live touched the nurses who cared for the boy as his foster parents kept watch by his bedside. Barbara O’Donnell, the head nurse in the intensive care unit, told one interviewer:

Johnny never tasted his birthday cake. His frail battered body gave out a little after 1 p.m. on August 31. An estimated 1,000 people attended his wake and passed by his small, white casket. His hair was neatly combed. He was dressed in a tuxedo he’d once worn for a wedding.

Later, William and Irene Lindquist were convicted of causing his death and were sentenced to prison.

Within a year, four “Johnny Lindquist bills” were passed into Illinois law and became models for the rest of the nation. Previously, only physicians had been required to report child abuse, but, under the new laws, teachers, school administrators, truant officers, law enforcement officers, social workers, nurses, nursery school and day-care workers and public aid workers were given the responsibility to do so as well as the needed protection against slander lawsuits.

In his 2011 autobiography, “Nobody Calls Just to Say Hello,” the late former Illinois Senate President Philip J. Rock noted that these Johnny Lindquist laws led to a doubling in the number of child abuse reports within the first year, to 6,748. By 1989, reports annually routinely topped 100,000.

His biological father Jimmy Lindquist, 57, died in Peoria on March 16, 1999. It appears that he and Johnny’s mother were divorced.

His foster father Robert Karvanek, 72, died in Wittenberg, Wisconsin, on February 8, 2003. He and Johnny’s foster mother Florence Karvanek were divorced.

Robert Karvanek Jr., the other foster son of the Karvaneks, died in Panama City, Florida, on January 27, 2010.

If he had lived, Johnny would be 52 today.

A slightly different version of this article appeared in the Chicago Tribune on 5.21.17.