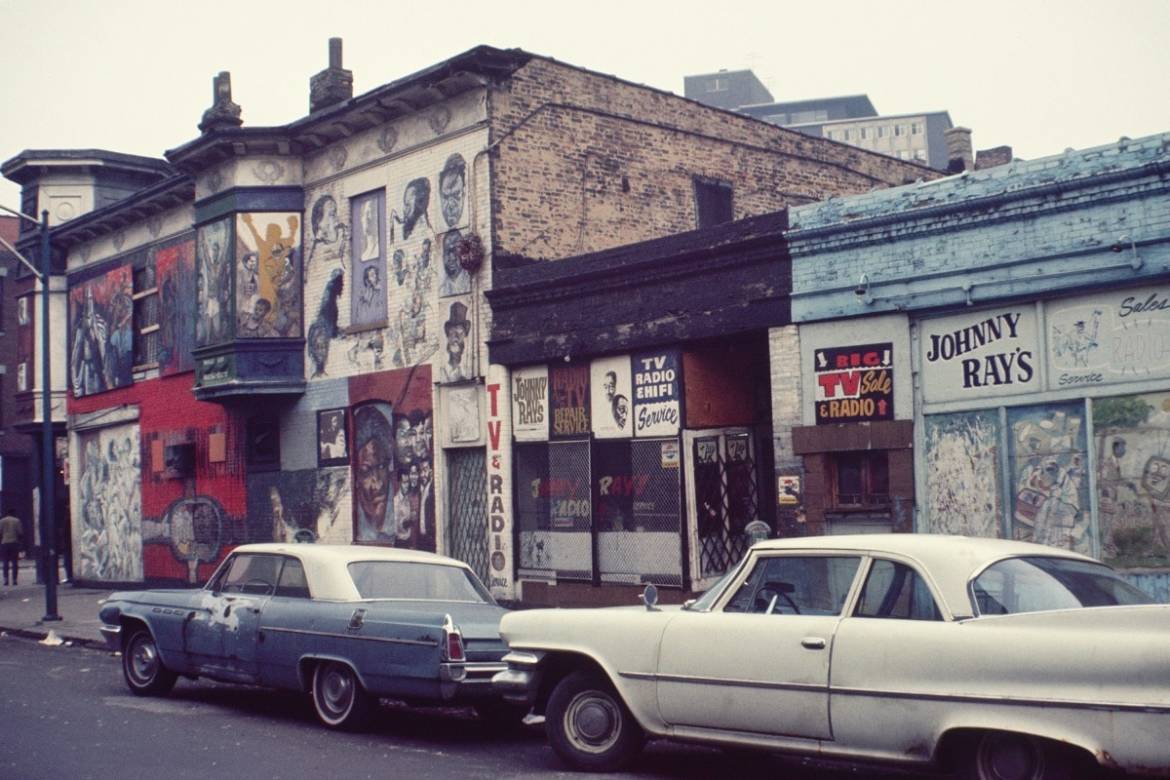 Previous item Chicago History: The... Next item Twenty-two noir or...

Chicago history: The Wall of Respect

A half century ago, on Aug. 27, 1967, local residents, poets, painters, photographers and gang members gathered to dedicate the “Wall of Respect”, a mural painted on the side of a dilapidated tavern on the southeast corner of 43rd Street and Langley Avenue in Chicago’s impoverished Grand Boulevard neighborhood.

It was a revolutionary act of art and politics that has reverberated throughout the nation ever since. It sparked the community-based outdoor mural movement that has provided thousands of neighborhoods of virtually every ethnicity and economic level with a language and format for asserting their pride and distinctiveness.

All photos courtesy of Mark Rogovin unless otherwise indicated

At its start, the “Wall of Respect” was an unprecedented assertion of black identity and an important yet often over-looked moment in U.S. cultural history.

“The Wall hit a nerve at the center of the Black consciousness,” writes Abdul Alkalimat in a soon-to-be-published book “The Wall of Respect: Public Art and Black Liberation in 1960s Chicago” (Northwestern University Press). An African-American writer and historian, formerly known as Gerald McWorter, Alkalimat watched as the mural was created by friends and colleagues, and adds, “News of it spread from coast to coast.”

Indeed, over the next eight years, more than 1,500 murals were painting in virtually every black neighborhood in the nation, according to art historian Michael D. Harris. So respected was the Chicago mural, that the title “Wall of Respect” was widely used, and “Wall” was often in the title of others.

In Chicago, more than 200 murals were done by 1975, and William Walker, the artist who came up with the idea for the original mural went on to paint dozens of outdoor works before his death in 2011, such as “Wall of Truth” and “Wall of Understanding.”

“It was a guerilla mural,” said artist Jeff Donaldson in a 2003 interview shortly before his death. Donaldson, one of the 21 artists and photographers who created the mural without the permission of the building’s owner, added: “It was a clarion call, a statement of the existence of a people.”

The building was in a rundown area targeted for urban renewal. At its front along 43rd, a Schlitz beer sign hung, and one for Prima beer jutted out from the long western wall facing Langley.

The 20-foot-by-60-foot mural extended south from the Prima sign and covered the two-story building with the images of more than 50 African-American heroes, ranging from Malcolm X to Bill Russell, and from W.E. B. Dubois to Dick Gregory, from Charlie Parker to Ray Charles.

“The project is designed to help give black people a more distinct sense of identity, as well as beautify the neighborhood,” Walker told the Chicago Tribune shortly after the dedication.

The mural’s painters and photographers were members of the visual artists workshop of Organization of Black American Culture (OBAC), an acronym that means “chieftain” in the West African language of Yoruba.

At a meeting earlier in the year, Walker, an experienced muralist and one of the older members of the group, said he had the OK of the bar-owner to paint a mural on the side of the tavern and was open to the others joining him.

So, they did, deciding to feature black heroes. Each participant was assigned a section and a theme, and the overall work was designed by Sylvia Abernathy. In most cases, house paint was used over whitewashed bricks and Masonite. Photographs were displayed on cardboard panels.

“Art for the People”

Prominent African-American poet and publisher Haki Madhubuti, then a member of the OBAC writers workshop and known as Don L. Lee, said that no one worried about contacting the absentee owner since he or she was almost certainly not paying property taxes and was unlikely to raise a fuss.

For the group members, the creation of the mural was a collective and community-centered act, and neighborhood residents, including gang members, had a lot to say about how the “Wall” was painted and who was represented.

“Rival gangs, the Almighty P. Stone Nation and the Disciples, declared the site a neutral ground, and leaders of the Stones met with the artists and offered to help secure materials,” wrote Harris in a 2000 essay. “The ‘Wall of Respect’…was Art for the People sanctioned by the people.”

In fact, Donaldson told black studies scholar Margo Natalie Crawford that, as he was painting an image of singer Nina Simone, a woman who lived across the street came up to him and said that the portrait, which she was going to have to look at every day, was ugly. “So, I changed it.”

One thing everyone agreed on, though, was that the wall of heroes shouldn’t include Rev. Dr. Martin Luther King Jr. because he wasn’t considered radical enough.

Madhubuti notes that the “Wall of Respect” was an outgrowth of the Black Arts Movement, a cultural expression of the Black Power Movement. After the 1965 assassination of Malcolm X, he noted, many African-American artists and writers turned away from the mainstream white society in search of “a redefinition of self — Who are we?”

Unlike today, there were very few images of blacks in the mainstream U.S. media in 1967, and even fewer positive images. Most of the properties in black neighborhoods were controlled by — and milked by — absentee white owners.

Art activists like those involved with the “Wall” were rejecting the term “Negro” for “Black,” a sentiment that Madhubuti expressed in the poem he wrote for and read at the dedication of the artwork.

Referring numerous times to “the mighty black wall,” he told the wider African-American community, “can you dig?/if you can’t you ain’t black/ some other color/negro maybe.”

“The Hour of tribe”

Just 12 days earlier, she had read a poem at the dedication of the then-controversial Picasso statue outside the Civic (now Daley) Center in which she chided critics: “Art hurts. Art urges voyages —/and it is easier to stay at home,/the nice beer ready.”

Her tone was much different when, on Aug. 27, she read “The Wall” at the dedication: “Black/boy-men on roofs fist out ‘Black Power!’…It is the Hour of tribe and of vibration,/the day-long Hour.”

In front of her, she wrote, were hundreds of faces “ready to rile the high-flung ground.” Behind her, heroes. “And we sing.”

The singing of black identity has gone on and grown stronger ever since.   But the “Wall of Respect” didn’t survive.

A fire of suspicious origin in the television repair shop in the building in early 1971 was the death knell, and the structure was razed a short time later.

The land remained vacant for more than 30 years until 2001 when The Quincy, a block-long, two-story building of 16 affordable housing apartments, was constructed by a private developer.

“The Wall of Respect,” however, was never expected to be permanent.

The pride and beauty it has spawned — and continues to spawn — is its legacy.

This essay originally appeared in the Chicago Tribune on 7.29.17. 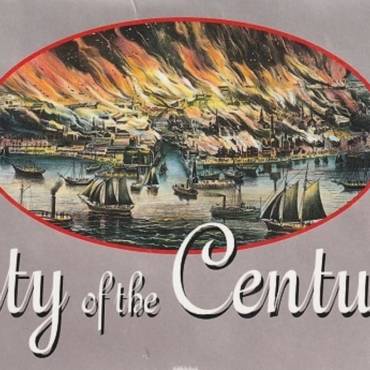 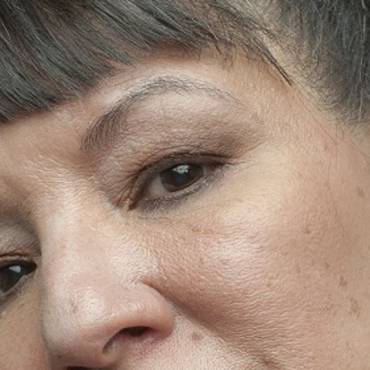 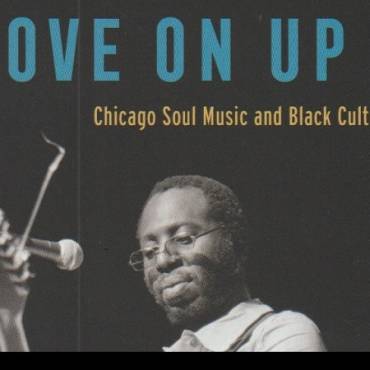