A conversation with a writer is, almost always, interesting and insightful. During a long career as a reporter for the Chicago Tribune, I was paid to talk with many, including Robert Caro, Sandra Cisneros, Richard Russo, Haki Madhubuti, Jane Smiley and Gay Talese.

Someone I wish I could include on that list is George R. Stewart, a writer who refused to let literary boundaries get in the way of his curiosity and story-telling verve. 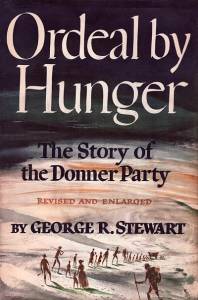 Stewart died in 1980 at the age of 85, and it was around that time that I discovered his history of the ill-fated Donner Party Ordeal by Hunger.  This group of 87 pioneer men, women and children got stuck in the High Sierra by snowstorms in the winter of 1846-47.  Many died; some survived — through cannibalism.

The book, originally published in 1936, is noteworthy for Stewart’s direct, clear and resolute writing about the horrors of that winter, such as this reference to one escape effort:

The men of the relief party encouraged the stragglers, but they soon saw that Tommy Reed simply could not make it.  And there was no one to carry him. He struggled on for two miles, a truly heroic distance for a three-year-old, and then gave out.

Some years later, I found Earth Abides, one of the first of the Post-Hiroshima novels to look at what the world might be like after some worldwide catastrophe, like a nuclear war.  In the case of this 1949 novel, it’s a deadly plague that kills off everyone except a lucky few, including Isherwood Williams.  In an all-but-abandoned New York City, he meets Milt and Ann Abrams. 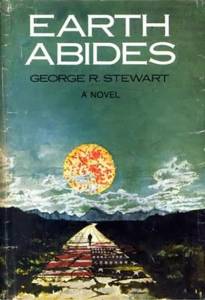 The evening passed pleasantly enough. They played cards by candlelight — three-handed bridge.  They drank liqueurs…It was kind of make-believe.  You pretended there was a world outside the windows…

The author of this much-lauded sci-fi novel was George R. Stewart, but it was years later that I realized he was the same guy who wrote Ordeal by Hunger.

By the way, a new paperback edition of Earth Abides will be published in October. Of course, given the present pandemic, it’s more pertinent than ever.

Then, during a visit to the Gettysburg battlefield, I found in the bookstore another George R. Stewart book, Pickett’s Charge: A Microhistory of the Final Attack at Gettysburg, July 3, 1863, published in 1959. Like the other two books, it was a lively and intelligent piece of writing.

By this point, I began to think that I wanted to find other George R. Stewart books.

One was his 1941 novel Storm which features, as its central character, a single January tempest that rises over the Pacific, thunders in to hit San Francisco and then moves off into the Midwest, sending climate reverberations all across the globe. 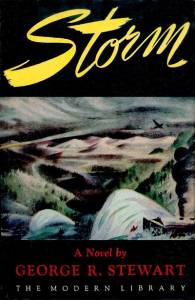 Fascinating on many levels, the book portrays the nuts and bolts of a still-early stage in the science of forecasting when, in the absence of computers, weather predictors had to rely to some extent on seat-of-the-pants judgements.  It’s a subtle and affecting piece of fiction, detailing the fragility of human life and plans in the face of unrestrained (and unrestrainable) weather.

Stewart took a similar approach in a 1948 novel Fire about a raging forest fire in the Sierra Nevada, and he wrote other novels and books about literature.  That fit since, for half a century, he was an English professor at the University of California, Berkeley.

And four ground-breaking books about names.  Two are, if you can believe it, well-told stories about place names: Names on the Land: A Historical Account of Place Naming in the United States (1945) and Names on the Globe (1975).  The other two are reference books, both rich in anecdote and color: A Concise Dictionary of American Place-Names (1970) and American Given Names (1979).

The titles may sound dull, but the books are consistently eye-opening, such as this snippet from Names on the Land:

Not all animal names were for animals.  A settler named Fox might leave his name upon a hill or stream, and Baer could easily shift to Bear.  Where a few Indians lingered after the rest of the tribe had moved westward, the place often became Indian Creek, but one of the Indians might be called Red Bird, or Buffalo, and his name survive after he was forgotten.

What a multi-faceted body of work!

And, yet, it was Stewart’s literary versatility, his omnivorous intellect and his emphasis on linking human stories with stories of the land (a tendency found in all of his books) that combined to keep him in the shadows.  He was never a star in any single bookish arena and is pretty much forgotten today.

That’s too bad because, boy, these books are rich and meaty.

And, boy, if I’d had the chance, I’d have had a delightful time talking with Stewart.

This essay was originally published in the Chicago Tribune on 2.2.16.