Essay: Long books for the long hours ahead

Early on, it was pretty clear that my wife and I — both over that red-alarm age of 60 — are going to be spending basically all our time in our home for what could easily be many months.

And one of my first thoughts was….time to read a long book!

If you’re a reader, also stuck at home, you may have a similar idea.  And, if you’re like me, you probably have a bunch of books that you’ve been meaning to get to.  This can be just a pile of a few by the bed or, as in my case, six tall bookshelves, holding more than a hundred books. (Don’t ask how many bookshelves there are with books I’ve read.)

I do a lot of reading, and, even without a national crisis, I’ll pick up a hefty book — I always read the physical version, although it does weigh down my briefcase — and spend a week or two reading it wherever I happen to be, at McDonald’s, say, or on the Red Line heading to or from the Loop.  (Ah, to be able to be back there now!) 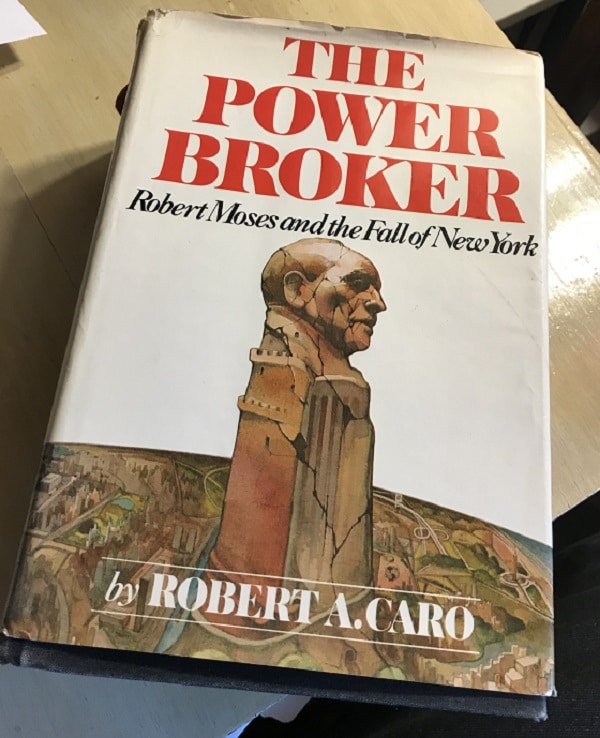 One of my all-time favorite books is The Power Broker: Robert Moses and the Fall of New York (1974) by Robert Caro which, in my estimation as someone who’s written about Chicago for nearly half a century, is the best book ever written about an American city.

Aside from its 118 pages of notes, bibliography and index, The Power Broker’s text covers 1,162 pages.  That’s a lot of pages, but, as I’ve told many people, Caro’s writing is so strong, novelistic and revelatory that they are the fastest 1,162 pages I’ve ever read.  Actually, I’ve read them twice.

Herman Melville’s Moby Dick (1851) — somewhere in the mid-600 to mid-700-page range, depending on the edition — is another book I’ve read twice although, truth be told, that first time many years ago wasn’t very satisfying.

A year ago, however, I tackled it again with a much different mindset, one that relished its rhythms and poetry instead of plowing through it like a beach read.  And I came away in awe of this epic literature, on a par with Homer’s Iliad and Shakespeare’s King Lear and the Bible’s Job.

A couple decades ago, I “read” the 768-page Ulysses (1918) by James Joyce.  Which is to say, I dutifully turned each and every page to be able to claim to have finished the book. But that’s a lie.  I didn’t get much of anything from it, sort of like my first reading of Moby Dick.  I know the fault was mine.

Nonetheless, when I glance over the many shelves of books that I’ve read, there are a great many big, monster books that I remember with fondness and delight.  Very few like Ulysses. 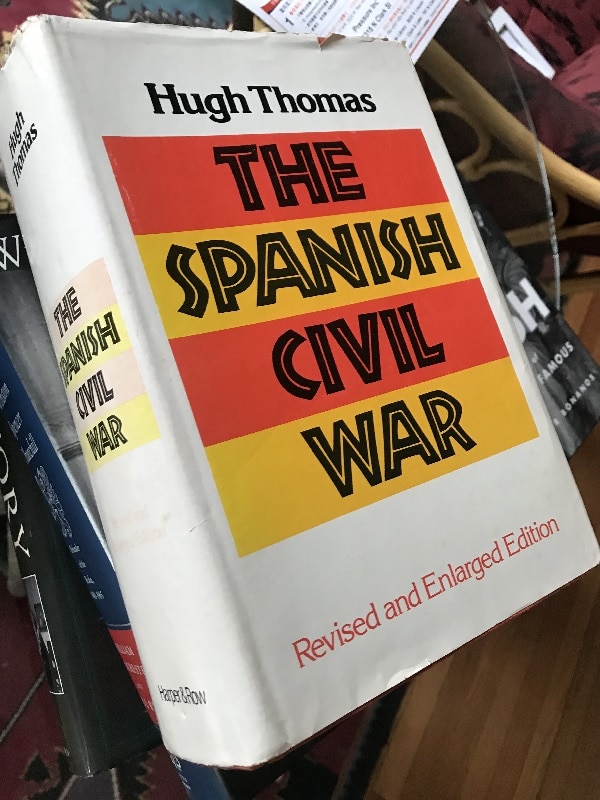 Which leads me to the question:  If now is a time to read a long book, which one?

Well, I gathered up a bunch of unread ones from my shelves and quickly realized one thing.

There are books that I own and would like to read — long and short, fiction and non-fiction — but I know in my heart that I almost certainly won’t.  Maybe this is true for you, too.

One big — I mean, big — example for me is The Spanish Civil War (1961) by Hugh Thomas.  I first glanced at this book while I was in high school and reading other stuff about that conflict, a practice-session for the European powers for World War II.  At that time, it had about 600 pages of text.  But, as weighty as it was then, that edition was nothing compared to the 1977 “Revised and Enlarged Edition,” now on my shelves, with 957 pages of text.

I like having this book.  It has links to my youth.  It’s on a subject that, every once in a while, I get interested in.  But I have to admit I am probably never going to read it.

Even as I say that, though, I know that I might read it.

This is one of the conundrums of books for me.  In the right frame of mind, in the right concurrence of circumstances and interest, I would dive into The Spanish Civil War.  But that’s not now.  And probably never will be.

There are a bunch of long works of fiction on my shelves that I’m much more likely to read sooner than the Hugh Thomas opus: 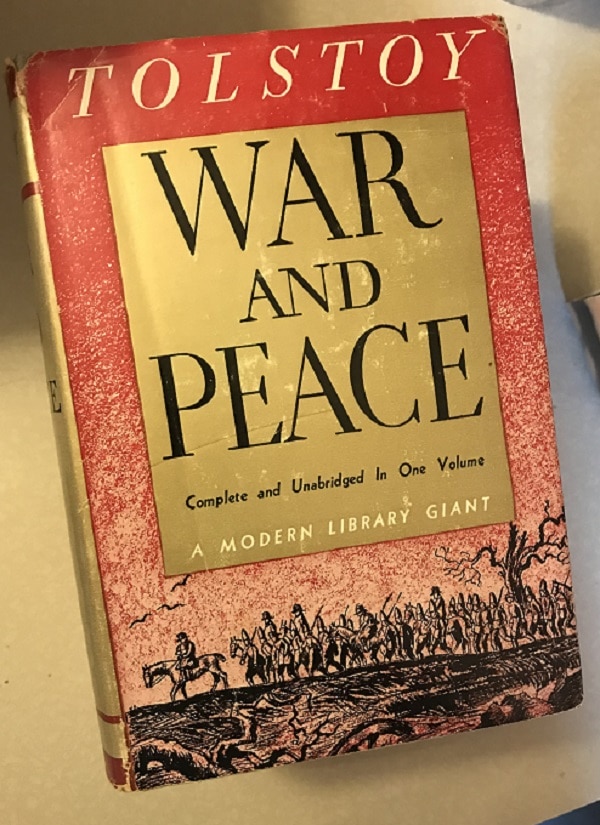 I don’t know about you, but, as a reader, I find great pleasure in thinking about those books.  I know they’re there for me if and when I make the decision to take a journey through them.

Don’t all readers have that delight — to look at a book and imagine entering its world and being surprised and shocked and captivated and wrapped up in someone’s story, whether from real life or the land of make-believe.

So, when I realized that Cathy and I are in the house for the long haul, I did look around and I did end up grabbing a big, long book.  But it wasn’t a novel, and it wasn’t a book I’d owned for very long.

It was — are you ready for this? — Cities of the American West: A History of Frontier Urban Planning by John W. Reps, published in 1979 by Princeton University Press.  It’s 694 pages long, plus another 133 pages of notes, bibliography and so forth.

For several decades, I have written about cities and how they are born and how they grow and evolve, and I’ve long been a fan of Reps who is the expert on city and town plans in U.S. history.  I’ve dipped into and used his other books in my newspapering and in my book writing, particularly The Making of Urban America (1965) and Town Planning in Frontier America (1969).

But I’d never gotten a copy of Cities of the American West because it’s a deluxe, over-size volume in a slipcase and, whenever I’d look, I’d find that a used copy was running anywhere from $40 to $90.

Then, in the last few months, I began gathering some material for what might become a future book about the physical aspects of Chicago, such as its streets, and, looking again for a copy, I discovered that one was available for $25.  It was listed as Very Good but, when it arrived a couple weeks ago, it seemed pretty New to me. 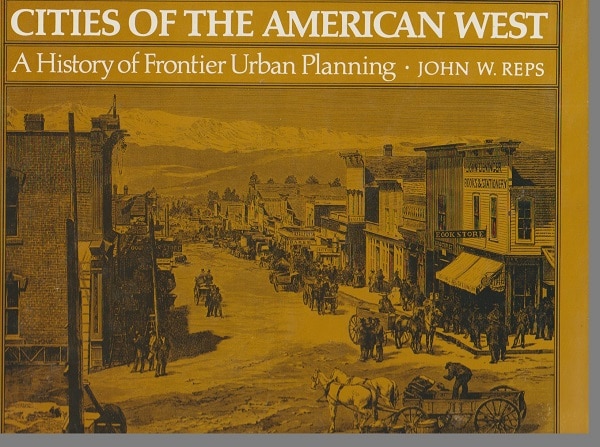 The crispness of a new book

I don’t know about you, but I love the look and feel and crispness of a new (or nearly new) book, and that’s how I reacted to Cities of the American West. Many of its pages are taken up in full or in part with the early street plans and bird’s eye views of hundreds of western settlements, towns and cities. The other two-thirds or so of the pages are filled with Reps’ extremely detailed account of the planning steps taken to found and later adjust the streetscapes of these various municipalities.

It’s a book for urban history geeks who like to wallow in such esoteric concerns as its exquisitely refined analysis of one street grid pattern versus another and who can enjoy such sentences as these:

“One unifying theme running through the diverse strands of western cities is the prevailing use of the gridiron street system with its rectangular blocks and lots…Easy to design, quick to survey, simple to comprehend, having the appearance of rationality, offering all settlers apparently equal locations for homes and business within its standardized structure, the gridiron or checkerboard plan’s appeal is easy to understand.”

Those aren’t exactly words to make anyone forget Shakespeare, but, if you’re the right reader with the right set of interests at the right moment, they’re catnip.

So, there it was, Cities of the American West, when the question arose about reading a long book, and, besotted as a reader can be with a new book, I just said “yes!”

Which I think may be a deep lesson about reading.  No matter the time, no matter the circumstances, if a reader wants to read a particular book — well, the book will be read.

So look around at your books and listen to the one that screams to you:  “Read me!”

This essay originally appeared in Third Coast Review on 3.20.20.