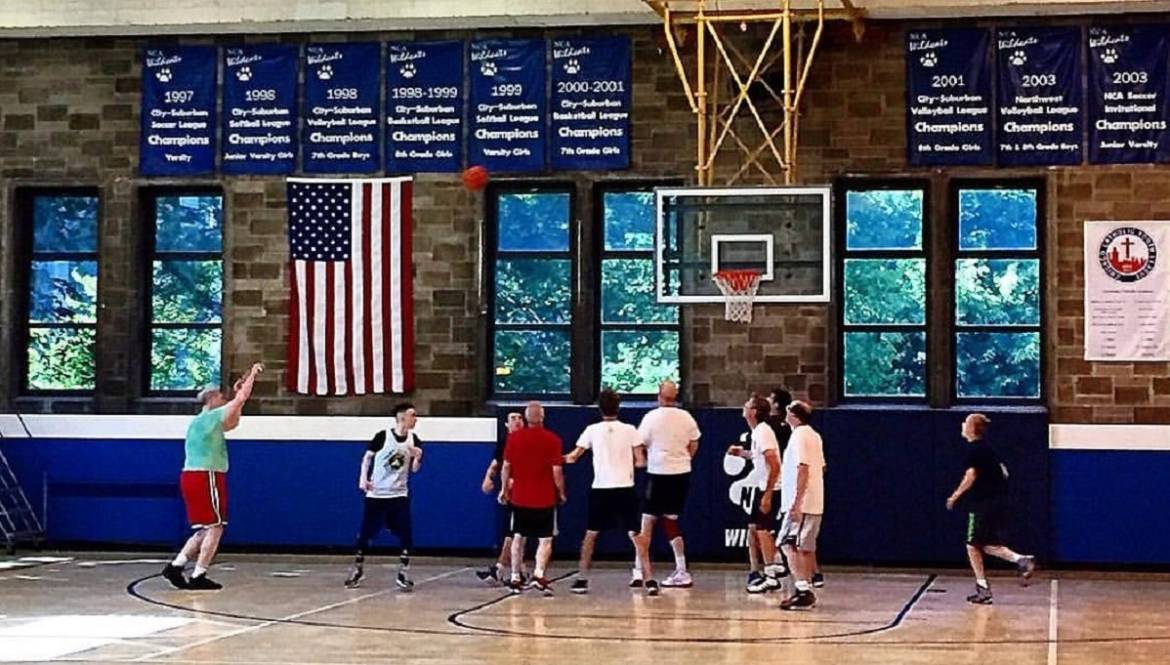 Previous item Essay: My lay-off and the... Next item Poem: "Rita"

Essay: Soul Seeing — At 69, I still find grace and God on the basketball court

The video of me playing basketball didn’t exactly go viral, but it did cause a bit of a stir among my Facebook friends.  And, later, it got me wondering about basketball and spirituality.

It was during our usual Sunday afternoon pick-up game at St. Gertrude Catholic Church on Chicago’s Far North Side.  This game that’s been going on in one form or another since, at least, 1995, is for guys 40 and older although, on any given Sunday, one or more of the men will bring a son or daughter.  We like to see the kids because they run the fast break for us.

Often, I’m the oldest guy on the court, and it was the week of my 69th birthday when my son took the video.

In it, this tall old, overweight guy — me — takes a pass from the corner, turns to his right, dribbles under the basket and, without looking, flips the ball up over his shoulder, past the outstretched arms of another tall guy, to bounce off the backboard and into the basket.  Then, the old guy lumbers — and, I mean, lumbers — up the court to play defense.

It’s a shot I’ve taken hundreds of times in the course of half a century on the court although — truth be told — without much success in recent years, and, for a number of friends, it wasn’t so much the shot as it was that someone so, ahem, advanced in years was out on the floor, sweating, straining and exerting himself.  One even went so far as to remark on “the grace and clumsy harmony” of the moment.

In my prime, I darted around the court and muscled for rebounds under the net and flew into the air to block shots.  No more.  Now, I’m slow and fat and earthbound and not completely stable on two surgically replaced knees.

“But you’re still out there!  Good for you!” I’m told, and I feel like a kid at t-ball who’s praised because, on his fourth try, he finally puts the bat on the teed-up ball.

Playing basketball at 69 is not easy on one’s pride.  Yet, two or three times a week, I’m out on the court with one set of friends or another, sweating, straining and exerting myself.  Why?

I think it has to do with that “grace and clumsy harmony” that a friend noted.

Pretty clumsy out there

Yes, I’m pretty clumsy out there.  Really, though, even at my best, there was much about my game that was limited.  My body could only do so much.  I couldn’t grab every rebound or block every shot or put the ball through the net every time.

This is the nature of sports.  An essential part of the fun of athletics is the element of failure.  Even Michael Jordan missed a high percentage of his shots, even Babe Ruth made an out more often than he got on base. For every team that wins a game, another loses.

If you play any sport, you’re going to come up short much of the time.  It’s a lot like life.  I can try to be caring and wise and open to others and to God, but, frequently, I’m selfish and wrong-headed and restrained by fears, not living up to my ideals, not living a Christ-like life.

The thing, though, with sports is that I keep running out there, hoping that, through effort and smart play, I can do well, within the limitations of my declining abilities.  It’s the same with life:  Every interaction with another person represents another chance to be compassionate, an opportunity to listen and to share, to choose what I know to be right.

That’s the “clumsy” part of me — or anyone — playing basketball.  The “grace” part has to do with a kind of mystical unity that takes place on the court.  I’m not talking about St. Teresa of Avila or St. John of the Cross, but I think they’d understand the ecstasy that occurs on any sporting field.

I remember running a fast break with two teammates and how we’d dash up the court, passing the ball from one to another to another with lightning speed to get around defenders and end up with the ball in the basket.  This was a visceral experience without much thought, an instinctual collection of moves that the three of us would weave together in a silent communication, a silent communion.

We were, the three of us, together in this moment that took place without words but was deeply shared.  We were, each of us, outside our bodies in a way.  We felt a strong connection to each other. And not only to each other.

What we had in that connection was the “grace” that my Facebook friend mentioned.  In that grace, like in Teresa’s or John’s ecstasy, we were together with each other — and with God.  And, in some way, with every human who has lived a bodily existence.

This is what the individual player feels when he sends up a long shot that swishes through the net.  Amid all the failures that any player experiences on the court, this moment is when there is a completeness, a unity of self and body.  It is not so much success as the experience of rightness.

I can have this sort of experience in my everyday life when I do something right and true and clear, such as being completely present to a friend who is filled with joy or sorrow or any sort of feeling and wants to share it.  Or being present to a boss or a cashier or a homeless guy or a TSA guard at the airport.

This essay originally appeared in National Catholic Reporter on 2.19.19.