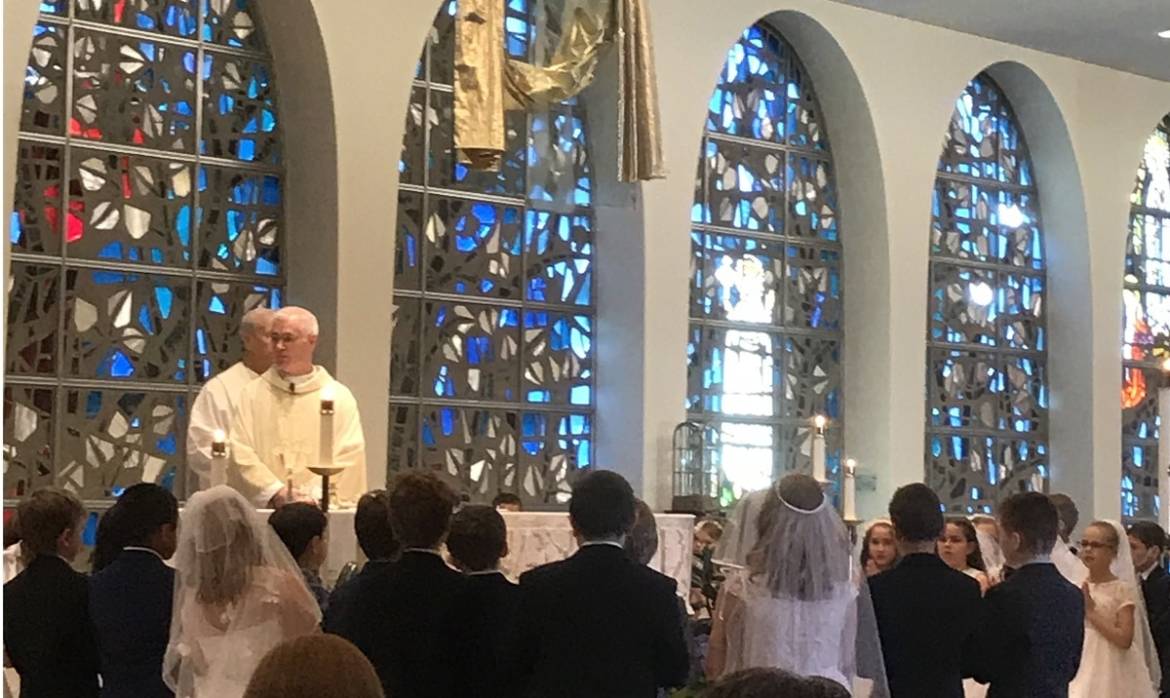 The other day, I was at the First Communion of my great niece Maeve, and I was again struck, as I often am, by the holiness of beauty.

Maeve is a beautiful eight-year-old — of course, aren’t all eight-year-olds beautiful? and holy? — and she was one of nearly sixty kids who were receiving the sacrament of the Eucharist in her parish church, St. Mary of the Woods, in Chicago.

It’s a low-slung worship space, built in the 1950s when Catholic church-building in the newly settled suburbs and on the edges of the city eschewed traditional architecture.  In an effort to keep costs down and experiment with new ways of raising the human spirit to God and toward community, the designers of St. Mary of the Woods put the altar along one very long western wall, facing some two dozen rows of pews under a ceiling that was only 20-25 feet above the floor.  It is a space that would have flirted with the sterility of a conference center meeting room except for one thing.

Along the western and northern walls are eighteen floor-to-ceiling stained-glass windows filled with abstract colors in and around myriad leaf shapes — the “woods” of the church name — and highlighted by eight images of Mary in various legendary visions, such as her appearance to St. Juan Diego at Guadalupe and to St. Dominic, giving him the rosary.

Throughout the touchingly innocent First Communion Mass, those two walls were ablaze with bright colors that subtly shifted with each subtle change in the sunlight outdoors.

It was beautiful.  It was holy.  It was a glimpse into the heart of God.

Beauty and a more equitable world

Every now and then, I’ll hear someone complain that the Catholic Church should sell off all its art in the Vatican and in its churches — and get rid of those church buildings while they’re at it — and give the money to the poor.

I understand the sentiment behind that idea, but it seems to me that to get rid of all that beautiful art and architecture would be to lessen our experience of God and to lose the unifying force of great art.

Please understand that I fully recognize the need for the church — for you and me and for humanity in general — to work for a more equitable world and to work to reduce the burden of poverty that weighs down hundreds of millions of our fellow human beings.  That is a foundation stone of our faith.

Another is beauty.  All religious faiths, as far as I know, find God in the delight, wonder and pleasure of beauty which, of course, isn’t just what we see, but also what we smell and touch and hear. Think of all the great music of all the many faiths.

Beauty is far from simple.  Indeed, it’s a complex reality that exists on many levels.  Something that might seem ugly can be beautiful.  Remember when Jesus used his spit and the dust on the ground to form a mud to put on the eyes of the blind man to give him sight.  It might sound yucky, but, for the blind man, it was a most beautiful thing.

During the church year, there is a lot to delight the senses — the exotic smell of incense, the darkened church suddenly alight on Holy Saturday, the touch of chrism on the forehead of the newly confirmed, the flow of water over the head of the baby being baptized.  One Holy Thursday, I was among those to have our feet washed.  What a touching — touching — human act!  The hands of one person, holding, bathing, caressing another’s foot, a communication of love, a communication of God.

I feel in love with the church — the building — when I was brought by my parents as a baby into this looming, vaulting, great open space over my head, so unlike the second-floor flat where the three of us lived.  This was at St. Thomas Aquinas (now St. Martin de Porres), a church filled with stained-glass windows and, behind the altar, a huge forty-foot-tall painting, patterned on a similar work by Spanish master Francisco de Zurbarán.

As wide and high and embracing as God

For the past thirty-plus years, my wife Cathy and I have worshiped with the St. Gertrude community in another space that seems to be as wide and high and embracing as the Universe — as God.

All four of the walls at St. Gertrude feature stained-glass windows, designed by German artists during the early 1930s when the church was being built.  At times when sunlight hits them at a certain angle, they splash the floor and the marble walls with exquisitely shifting patterns of color that bring small children — and, I’m sure, many adults — no end to delight.

I went to St. Gertrude for a couple decades at least before I realized that the stained-glass windows contained a subtle artistic grace note that has given me great joy ever since.  In the windows on the east wall, over the doors of the church, Jesus, Mary and the saints have blue and turquoise halos while those in the in the windows along the very long north and south walls are generally orange and yellow, often in the same circle of light.

But behind the altar on the west wall, the six saints who flank Jesus are adorned with halos of kelly green.

The Baltimore catechism, a half century ago, defined a sacrament as “an outward sign instituted by Christ to give grace.”  All of this beauty — whether the mud of Jesus’ spit or the clouds of incense or Michelangelo’s Sistine Chapel or Notre Dame in Paris — all of these are, to my mind, outward signs, instituted by God, to give grace.

And we can be one of those outward signs.  We can be bright lights of beauty in the world, no matter what we look like.

And our halo can be blue or orange or even kelly green.

The essay originally appeared in the National Catholic Reporter on 6.25.19.