Essay:  Still thinking about the thinkable

Eight and a half years ago, an elderly friend of mine died, and one of the guys I play basketball with got leukemia.  It got me thinking about that thing we always seem to believe is unthinkable — Death.

So I sat down and planned my funeral service.

I wrote an essay about this which appeared in the Chicago Tribune in October, 2011.  It’s down a little further.

Ever since, I’ve had a copy of that essay on our refrigerator as a reminder: What I have now, I won’t always have.  My life is ephemeral.  Or, as the author of the Biblical book of Ecclesiastes in Robert Alter’s translation, put it:

And, later in the book:

Well, there’s nothing like a global pandemic to get thoughts running in that direction again, especially for me who, at 70, is a member of the big at-risk group.

This moment in history is, in its way, the quintessential face-to-face confrontation of every human being with our transitory nature.

If I sit on my porch, I see a few people go past, and I have no way of knowing if that woman jogger is carrying the virus, or if that guy with the two dogs has a breathing problem that makes him particularly susceptible to the virus.

I can’t tell who is a danger to me and who is a victim.  Even more, the odds are that, if the woman jogger is a carrier, she won’t know she’s a carrier.  The guy with the dogs, on the other hand, if he had trouble breathing, is very sensitive to the peril that this outbreak holds for him.

So there is a deep mystery here.

At the same time, I know — know — that the virus is a greater threat to me than a lot of other, mostly younger people.  That gives me pause.

And all those other, mostly younger people — they know, to a greater or lesser extent, that, while they are better prepared to fight off the virus, they could bring it to someone, like me, who isn’t. 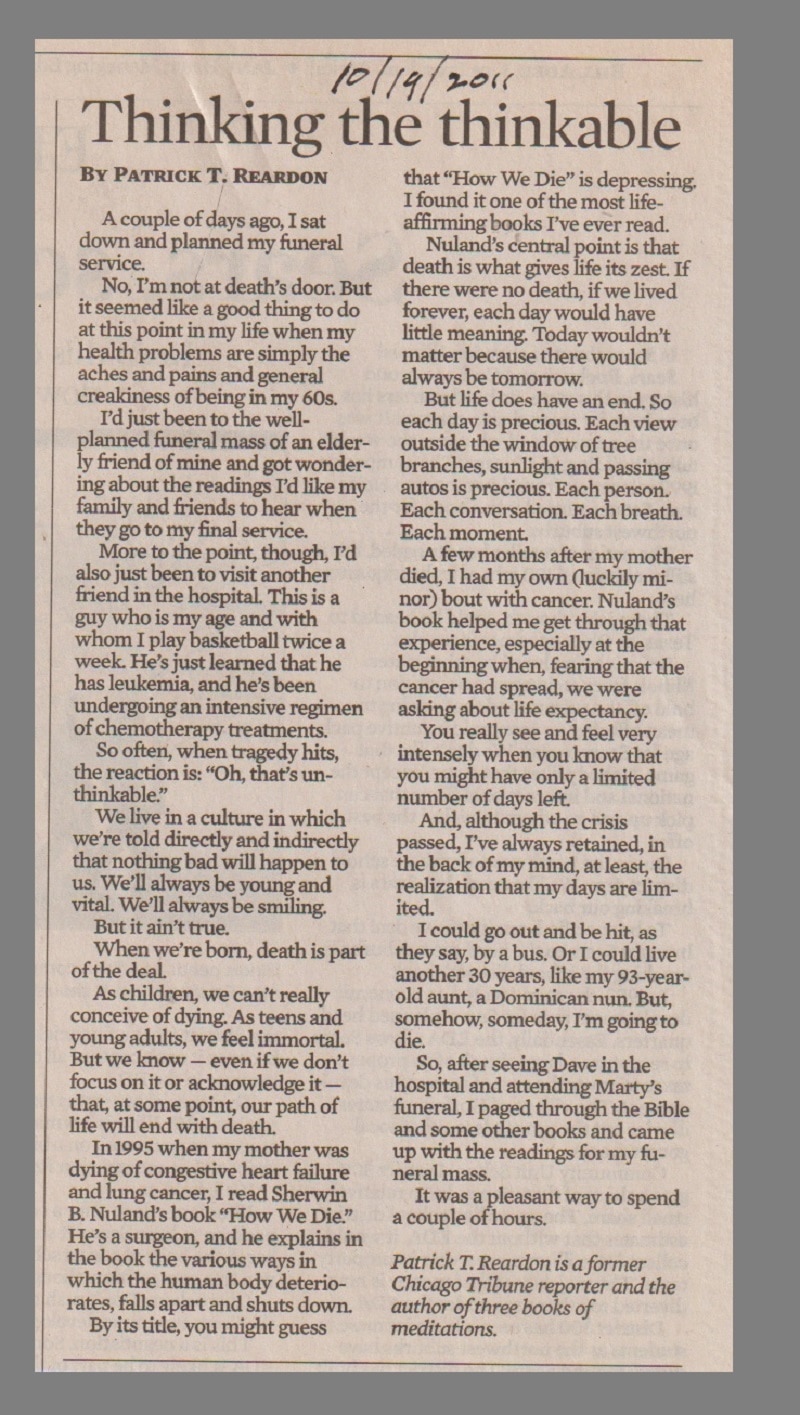 First of all, let me bring you up to date:  Dave survived the leukemia and has been back at basketball for the past decade.  Sister Julia, my aunt, died a month after my essay ran in the Tribune.

In the meantime, I’ve re-read Sherwin Nuland’s book How We Die and two new ones: Creatures of a Day and Other Tales of Psychotherapy by Irvin D. Yalom and Advice for Future Corpses (and Those Who Love Them): A Practical Perspective on Death and Dying by Sallie Tisdale.

In contrast to Nuland who looks at physical things (blood, muscles, cancer, the heart and so on), Yalom deals with the emotions, fears and terrors that human beings — his clients and himself — bring to the subject of death. Tisdale, meanwhile, writes with compassion, caring and more than a bit of humor. While not religious in an institutional sense, her book contains the spiritual message that life is richer when you recognize that death is coming.  That death is a part of living — indeed, a key component of living — and, as such, part of God’s creation.

I reviewed the Yalom book for the Tribune, and the Tisdale book for National Catholic Reporter.

All three of those books stressed the role that death plays in life.  Life is only life because we die.  If we didn’t die, life would be very different….and, probably, very boring.

I touched on this in a poem I wrote 39 years ago at a time when I was wiped out by an array of unfocused aches and achings:

On this porch, on this cool summer day,

when the moon is benign in afternoon sky,

when birds sing from wire to wire,

I have no argument.  This may be

the milk-and-honey time, the fulcrum,

the equator.  I may be on my way

down or past or into. This will change,

and I will change, and the wood of this porch

will rot.  The birds will die,

and I will die, and new leaves will grow

under other summer suns.  I have no argument.

So, here we are at the start of the coronavirus outbreak in the United States.  How long will this continue?  No one knows.

How many will die?  No one can say.

Who will die?  Well, we know those who are most in danger.  But even young people can be taken down by it.

Death, especially now, isn’t unthinkable.  And it’s worthwhile, for each of us, to know that it is thinkable.  And to think about it.  And what it means on a personal basis in terms of the way we each live and how we act.

Death as a threat is a reminder to be kind.