I’ve started to think of it as The After.  I mean that time when it will be safe for me and the rest of the world to do all the stuff we used to do before Covid-19 showed up and ruined the party.

The time after we’ve lived through this pandemic, those of us who do live through it.

I suspect that everyone, like me, is fantasizing about what to do in The After.  What restaurant to go to.  What theme park to visit. What ballet to see.  What singer to hear.  What park to barbeque in.

Basketball is something that I really miss, but most of the guys I’m playing with and against are over the age of 60 or, like me, over the age of 70.  We aren’t going to be playing again until this Covid thing is really over.  It’s just too dangerous for us to bang bodies under the board and huff and puff around the court.

A fantasy in my phone

I have a fantasy about The After in my phone that I can check whenever I want to.

It’s the app from The Weather Channel that shows me, with a click, the temperature in my Chicago zip code as well as the humidity, barometric pressure and the forecast for the next ten days.

But, with a flick of my thumb, I can be in Quebec City or Albuquerque or London or Paris.

Not really, of course.  But, by flicking to the left, I can see what the weather is like in those four places — all of them cities where my wife Cathy and I have vacationed and really enjoyed ourselves.

On a recent day, I did this virtual travel and learned that, in Quebec City, the expected high was 91 degrees with high humidity with an evening low of 66.

And I could picture how it would feel to stroll the delightful boardwalk outside the Château Frontenac, the huge, 1893 castle-like hotel overlooking the St. Lawrence River.  Cathy and I stayed a block from there a couple years ago, and I know how the river breeze cuts the high temperature, at least a bit, and how pleasant the stroll is in the early evening when things have cooled down.

Going to the Louvre?

Albuquerque was expecting a high of 96 and low of 64, but we know, from having been there last year — for me to play, poorly, in a senior basketball tournament — how it’s a dry heat.  Even at the hottest part of the day, you can walk around in relative comfort, but you want to be sure to avoid sunburn.  And, for that matter, sun stroke.

A temperature range of 72 to 51 or so was predicted for both London and Paris.  Very pleasant for walking the streets of those cities as we like to do.

Cathy enjoys going to gardens while I’m partial to art museums.  In fact, in Paris, where we’ve visited three times, we have stayed each time at the same hotel, a block from the Louvre. 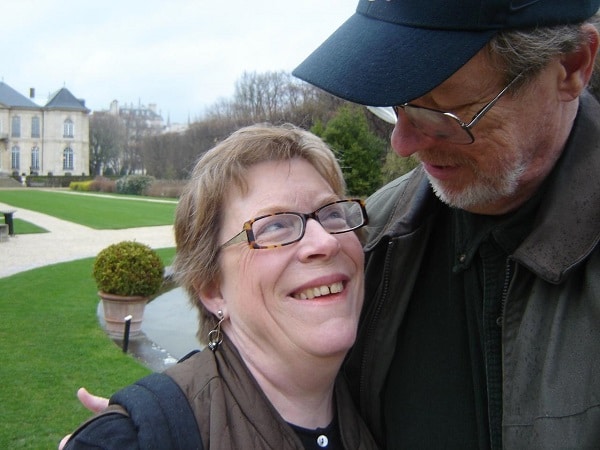 Cathy and I at the Rodin museum in Paris, a pleasant stroll from our hotel near the Louvre.

No way I’m going to the Louvre again until I’m safely vaccinated and so is everyone else.  Or, in London, to the Hoop & Grapes, “Famous for…Being the only timber-framed survivor of the Great Fire of London.”  Or, in Albuquerque, to the Old Town.  Or, in Quebec, to that pleasant boardwalk.

Of course, no way I’m going to any of these places until it’s fully safe to fly.

Again, as a 70-year-old, I’m not gonna try to test things.  I want a sure thing.  I get the shivers just to think about the lines of people going through airport security and finding my seat on a fully packed airplane.

Still, it’s nice to dream.  I’m sure everyone — all over the world — has one or maybe many lists of what to do in The After.

There may be many divisions in our nation and our world, but it seems safe to say that we’re all looking forward to The After.

I can hardly wait.

This essay originally appeared in the Chicago Sun-Times on 6.30.20.