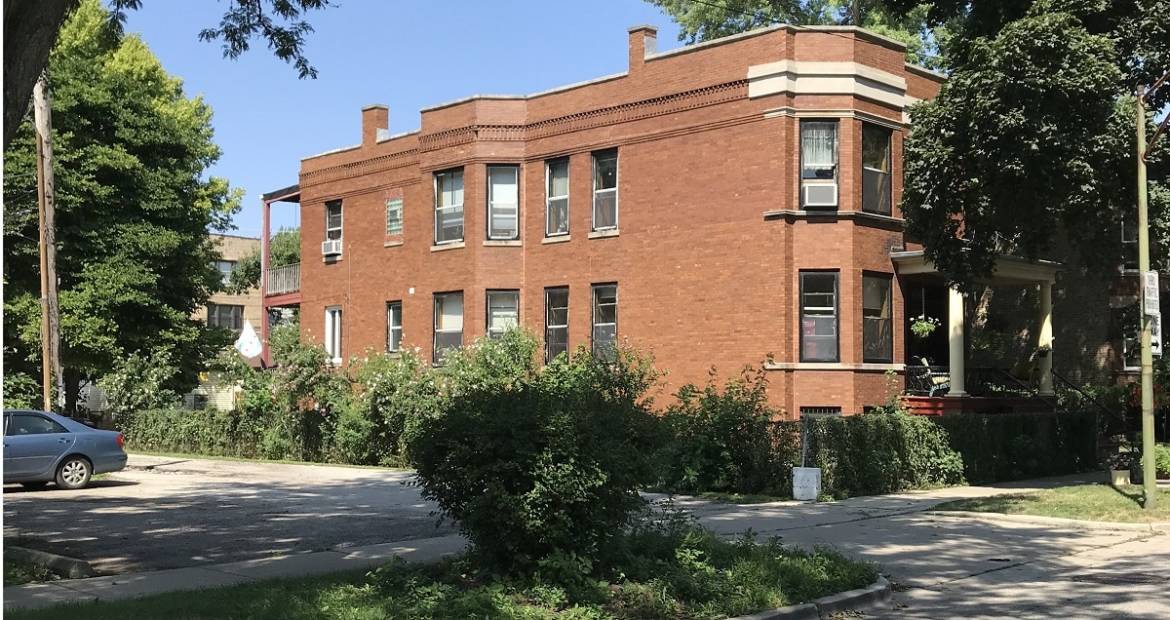 Previous item Poem: To Help Her Move Next item Book review: “Grant” by...

Essay: The home we own that doesn’t belong to us

My wife Cathy and I have been in our two-flat on Paulina Street since 1984, and, even though the bank has always had its portion, we think of ourselves as the owners of this 108-year-old home.

Yet, more and more, I’ve come to realize that this handsome, red-brick building with its large side yard and large backyard, with its beautiful summer garden, planted and tended by Cathy, and with its front, side and back sidewalks, shoveled by me in winter — this spot on earth that we think of as ours — doesn’t belong to us. Not really.

A long time ago, I looked up the history of our property which is in the Edgewater neighborhood on Chicago’s Far North Side.  From the best I can remember, the house was built around 1910 and was the home of a German family for a long time.  By the time we bought it, it was on its third owner and was filled with three branches of an extended Japanese family.

Each of these owners, each child who grew up in the house, each person who looked out mornings through its windows had his or her own experience of the place.  Each owned the place in a very personal way.

The sun flooding into the house

For me, the sun flooding into the house through its south-facing windows, setting the blond wood of the floor of the top apartment aglow, was almost transcendent in its beauty.  For one of the earlier people, it may have been an unwanted glare that needed to be blocked by thick curtains.

Our kids ran up the back stairs, eroding with each step the wood that, over many decades, had been worn down by other shoes, perhaps those of a factory worker or a new bride.

In our backyard is a red maple that I think of as our daughter Sarah’s tree since her brother David had been given a newly planted willow, now gone.

Yet, it’s not really Sarah’s tree.  It belongs to the whole neighborhood.  You can’t drive down our alley in the summer without being shaded by its thick green foliage.  You can’t walk by in the fall without seeing its leaves turn red and then, one by one, fall away.

Woven into the cityscape

It’s the same for our house.  For everyone who lives on our block or visits, its red-brick walls and yellow porch columns are woven into the cityscape.  It is part of the feel of the community.  In that way, our house is owned by everyone.

I’m aware, too, that, someday, someone else will hold the deed to our house. Other owners will walk up its front stairs and open its closet doors.  It might be torn down, and something new erected in its place.

But, like every person who has lived in this house before me, I will continue to have some ownership of the new building or, if nothing is here, of this spot on the face of the earth.  Even after I’m dead.  I share this place with all who have been here before and all who will come after.

Our house is near Ridge Avenue and is on a rare Chicago ridge where, say, 400 years ago, some Native Americans may have lived or camped or simply passed by.  The land was being used by them then, as Cathy and I are using it now, and as someone else will in the future.

I think this is true of any home, even a brand-spanking new one out on the far fringe of the metropolitan region.  You may be the first owner of your home, but someone owned the land before you.  And, after you, the home will belong to someone else, and on and on.

It makes me think about the astonishment of Native Americans at what they thought was a very odd idea promoted by Europeans as soon as they arrived on this continent.

These Dutch and British and French and Spanish took out piece of paper or parchment and drew lines.  These lines, they told the Native Americans, proved that Mr. So-and-So owned this land over here, and Mr. Such-and-Such owned that land over there.

That seemed preposterous to these people whose forebears had roamed the prairies and woodlands and high reaches for some 30,000 years.  No one could own land, they said.  It belonged to everyone.

I think they were onto something.

This essay originally appeared in the Chicago Tribune on 8.23.18.