Patrick T Reardon is the author of ten books:

He has also written one or more chapters for the following books: 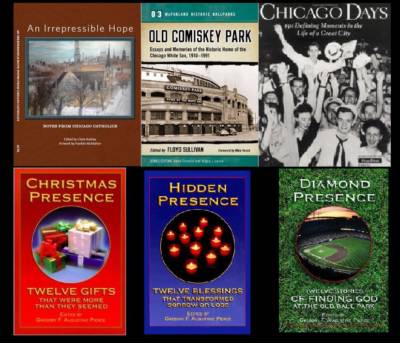 In 1997, he was one of ten writers profiled by Christopher Ringwald in Faith in Words: Ten Writers Reflect on the Spirituality of Their Profession.

Reardon was the urban affairs writer and a feature writer at the Chicago Tribune during a 33-year career at the newspaper. He specialized in writing about social issues, public policy questions and the interconnections within the Chicago region.

He was the primary reporter and team leader on a wide variety of in-depth multi-part series on such subjects as the urban underclass, public housing, Chicago’s public school system, the middle-class migration out of the city, the rebirth of the Chicago River, the inner workings of a ward boss’s organization, the social and cultural shifts behind the disappearance of the city’s taverns, the surprising importance of alleys in the life of the city, and the emotional, cultural and historical factors behind suburban sprawl.

Reardon was one of a team of Tribune writers and reporters who won the 2001 Pulitzer Prize for explanatory reporting for “Gateway to Gridlock,” a series of stories about the nation’s over-crowded skies. As a team leader, he has won three Peter Lisagor Awards from the Chicago chapter of the Society of Professional Journalists for reporting. In addition, his book reviews won two Lisagors for arts criticism.

During his career, Reardon used his expertise in social policy, demographics, statistics, community organizing, Chicago politics, Chicago history, the geography of the city and region, the city’s literature, the multiplicity of governments in the region, real estate development, religion and the history of the nation and world to hold a mirror up to the people of the metropolitan region. His goal has always been to help people understand where they’d been, where they were and where they were going.

In 2010 and 2011, Reardon wrote for and edited the website of the Institute for Comprehensive Community Development.

He has also written for a variety of publications, including National Catholic Reporter, U.S. Catholic, the Chicago Sun-Times, Health Progress, Reality, Streetwise and Illinois Heritage.

In addition, Reardon has contributed op-ed pieces to the Tribune on subjects ranging from women in major league baseball, the marital status of Jesus, Fort Dearborn, worries about Alzheimer’s disease, an all-too-human umpire, sainthood, the abrupt decision of Mayor Richard M. Daley to leave office, the joy of snow-shoveling and death.

In 2011, Reardon was named by Illinois Gov. Pat Quinn to serve as a member of the advisory board of the Abraham Lincoln Presidential Library and Museum in Springfield, IL. In 2012, he was named to the Archdiocesan Pastoral Council of the Archdiocese of Chicago.

He has been a scholar in residence at the Newberry Library. He has lectured on Chicago history at the Chicago History Museum and on journalism at Northwestern University, DePaul University and Roosevelt University. His poems have appeared in many periodicals.

Reardon and his wife, Cathy Shiel-Reardon, a psychotherapist and school social worker, live in the Edgewater neighborhood of Chicago. Their daughter Sarah, a public school teacher in Chicago, is married to John Fallon, a social work expert. Their son David, a top executive with a spirits company, is married Tara Ruccolo, a marketer and event planner.  Their daughter Emmaline Patrick Reardon was born in 2019.