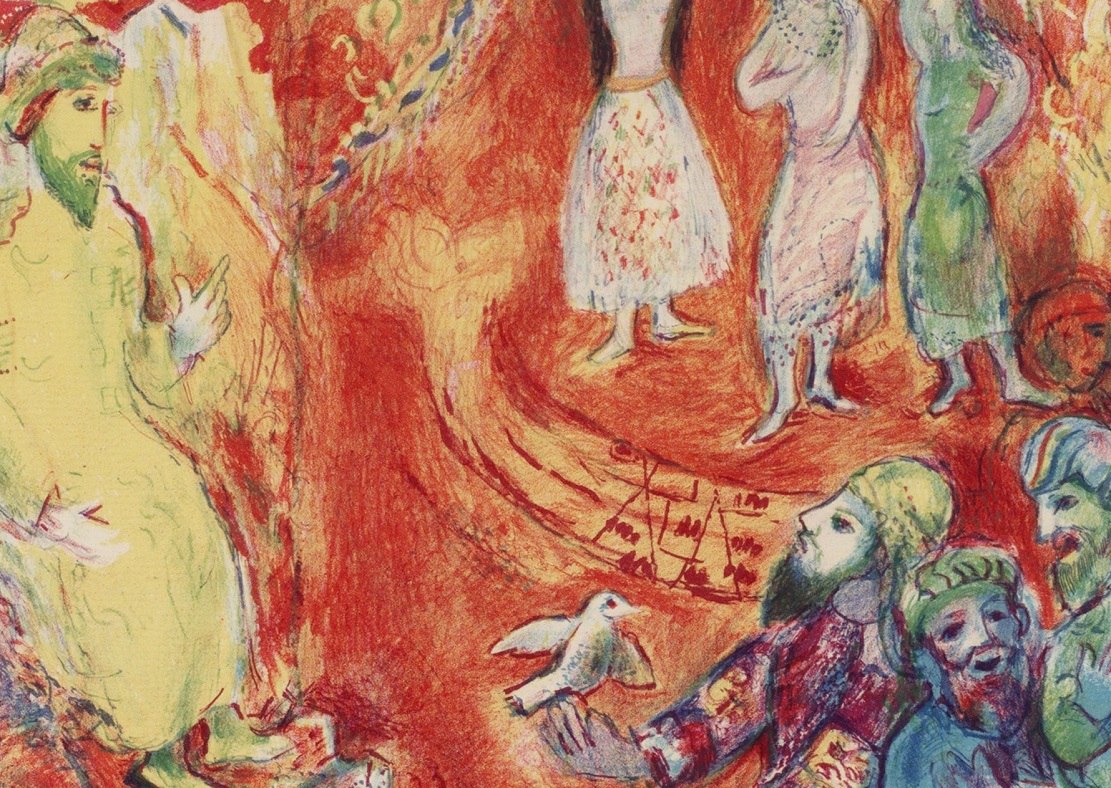 It is not often that three works of art can be found in one volume. But that’s the case with Arabian Nights with art by Marc Chagall and text by Richard Francis Burton.

As Norbert Nobis explains in an introduction, Arabian Nights, also called Tales of a Thousand and One Nights, is a collection of stories from a wide array of cultures, including Indian, Persian, Hebrew, Arabian, Syrian, Egyptian and Mesopotamian, “merged into a single work welded together by the Arabic language and the Islamic faith.”

This frame story involves a King who marries a succession of virgins. Each one comes to his bed on their wedding night and, in the morning, is executed. The reason: The King doesn’t want to be the victim of his wife’s infidelity. (This, by the way, is the sort of over-the-top, operatic, baroque thinking that’s on exhibit throughout Arabian Nights.)

The latest of the King’s wives is Scheherazade, but she has a plan. When she comes to her wedding bed, she begins to tell the King a story but hasn’t finished it by dawn, the usual time when, as the new wife, she would be sent off for execution. So, curious about the ending, the King brings her back the next night, and so it goes for nearly three years. Even if Scheherazade finishes a tale during the night, she has another one going — but not finished — by sunrise.

Arabian Nights apparently began as an Arabic translation of a Persian book Hazar Afsan, and some elements seem to date back to the 700s A.D., a millennium before the first European translation. That was a French work by Antoine Galland, published in twelve volumes from 1704 to 1717. The first English edition was in 1706.

The 10-volume translation by Sir Richard Francis Burton, an explorer, geographer, poet, spy and all-around odd guy, published in 1885, is one of the most thorough — and scandalous — of the English versions. Burton’s work is noteworthy for his emphasis on sexual imagery in the text and for his extensive footnotes and appendices on Middle Eastern sexual practices.

This Chagall-illustrated edition of Arabian Nights reproduces from the Burton translation four of the longest stories, each of which unfolds over a period of seven to 19 nights.

There is something compulsively readable and captivating about these four stories and Arabian Nights in general. It’s not really the cliff-hanger nature of the stories which, when interrupted, often aren’t all that suspenseful. And it’s not that there’s much resonance between the actions of characters and events in their lives with the actions and events of a modern reader. As I said above, these stories are pretty operatic in their lack of connection to real life.

There’s something deeper that makes these stories about mermen and mermaids, about flying ebony horses and bejeweled rings, about unfaithful men taking vengeance on unfaithful women so enticing.

It may simply be that these tales link directly into some story-hearing DNA in us. We don’t believe for a minute in these characters are actual human beings, yet we want to find out what happens — not because of any suspense but, well, just because.

For instance, Princess Jauharah has climbed a tree to avoid having to meet and marry King Badr Basim. Not even searching for her, King Badr Basim just happens to sit down at the base of the tree, and — whoa! — sees her up in the branches. They banter, and then, as Burton writes:

She came down from the tree and drawing near him strained him to her bosom and fell to kissing him; whereat passion and desire for her redoubled on him…Jauharah pressed him to her bosom and pronounced some unintelligible words; then spat on his face, saying, “Quit this form of man and take shape of bird, the handsomest of birds, white of robe, with red bill and legs.”

I don’t know about you, but I find that scene just enthralling. Of course, King Badr Basim will later be turned back into a man. But, actually, in Arabian Nights, you can’t be sure. And, of course, these two will get back together again, either in battle or in love. But, in fact, they don’t.

It’s that kind of book.

Here’s how Chagall envisioned this moment in a line drawing:

And here is that scene in a lithograph:

What’s particularly striking to me about these two versions is how unthreatening it all is. A lesser artist would have felt the need to insert thunder and lightning of some sort.

Instead, there’s a dreamlike quality. A man-size bird is there, upside down. The Princess seems to be floating down from the branches.

The face of the King in the lithograph, contrasting with the line drawing, shows a fairly cavalier attitude to the job of catching the lady floating down from the tree.

It is beautiful and other-worldly.

Some of Chagall’s lithographs are drastically different from the earlier line drawing, such as a couple for the first story he illustrates “The Ebony Horse.”

…a horse of the blackest ebony-wood inlaid with gold and jewels, and ready harnessed with saddle, bridle and stirrups such as befit Kings…”O, my lord, the virtue of this horse is that, if one mount him, it will carry him whither he will and fare with its rider through the air and cover the space of a year in a single day.”

The speaker is the inventor of the mechanical horse, a sage who, in return for the horse, wants to marry the King’s youngest daughter. She, for her part, wants nothing to do with him:

He was an old man, a hundred years of age, with hair frosted, forehead drooping, eyebrows mangy, ears slitten, beard and mustachios stained and dyed; eyes red and google; cheeks bleached and hollow; flabby nose like an eggplant; face like a cobbler’s apron, teeth overlapping and lips like camel’s kidneys, loose and pendulous….

Rarely, in literature, has any character been described in quite such a deliciously cruel way. And his personality matches his appearance. And — spoiler alert! — he comes to no good.

Even so, this ugly sage doesn’t even make it into Chagall’s line drawing of the scene, just the King and his three daughters:

With the lithograph, though, he’s there, but it’s impossible to tell which of the three sages who have brought wonders to the king is the ugly one. None is very easy on the eyes.

This image like the rest of the lithographs exhibits a tantalizing and unsettling mix of Chagall’s Eastern European heritage and the Western perception of the world of the Middle East. Yet, they aren’t simply based on perception.

These images echo the text in a way that’s below the surface. It’s wrong to say that Chagall illustrated Arabian Nights.

These works are a kind of middle ground in which Chagall in the spirit of Arabian Nights meet and co-exist.

Like Burton, Chagall translates Arabian Nights. Unlike him, he makes no attempt to be literal.

As a result, he goes deeper into the stories and their world. 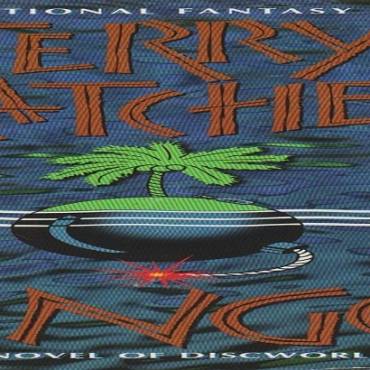