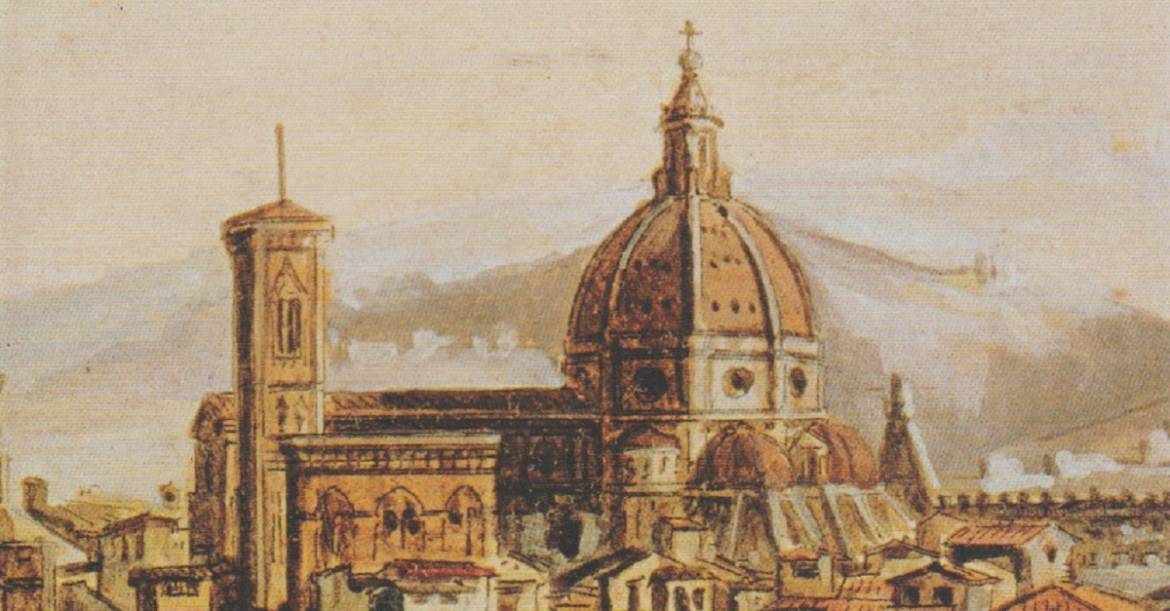 Book review: “Brunelleschi’s Dome: The Story of the Great Cathedral in Florence” by Ross King

Okay, I recognize that — as Ross King writes in Brunelleschi’s Dome: The Story of the Great Cathedral in Florence — building the dome over the long-undomed Santa Maria del Fiore cathedral had become, by the early 15th century, “the greatest architectural puzzle of the age.”

And I see that, in solving that puzzle, Filippo Brunelleschi not only fashioned a great work of art — the dome remains the tallest and widest ever created without modern materials — but also raised the status of architect above the level of manual worker to that of the artist.  King writes:

Largely through his looming reputation, the profession was transformed during the Renaissance from a mechanical into a liberal art, from an art that was viewed as “common and low” to one that could be regarded as a noble occupation at the heart of the cultural endeavor.

Before Filippo’s time the faculty of genius was never attributed to architects (or to sculptors and painters, either, for that matter).  But Marsuppini’s epitaph refers to Filippo as possessing divino ingenio, “divine genius,” marking the first recorded instance of an architect or sculptor being said to have received divine inspiration for his work….

In his unquestionable brilliance the writers of the Renaissance found their proof that modern man was as great as — and could in fact surpass — the ancients from whom they took their inspiration.

I get all that.

But the tens of thousands of people who bought this book, published in 2000, weren’t looking for a treatise on architecture or on the details of the innovative engineering that made the dome possible.  Not really.

If so, they would have purchased instead a much more technical look at the history of the dome, Brunelleschi’s Cupola: Past and Present of an Architectural Masterpiece by Giovanni Fanelli and Michele Fanelli, published in 2004.  Although profusely and beautifully illustrated, the book by the Fanellis is rough going for anyone who isn’t an architect or engineer.

So why did no many people buy King’s book and turn it into a bestseller?

Yes, he goes into the details of the dome-building project and the many machines that Brunelleschi invented to deal with problems that arose and the particular architectural and engineering strategies that he devised and employed.

Even in this, though, King writes as a story-teller.  He writes in a lively fashion that makes the arcane clear — or, at least, relatively clear.  And, as the above quotations illustrate, he also goes into the reasons Brunelleschi’s work was so important and the results his work brought about, beyond the beautiful building.

Consider his description of the safety measures in use on the project:

Masons working high on the walls were given leather safety harnesses, and their wine was to be diluted with a third part of water, a mixture normally reserved for pregnant women….

Workers were also forbidden to transport their tools, lunches, and worst still, themselves in the tubs of the hoist.  Nor were they permitted to swing inside the hoisting tubs in order to capture pigeons nesting in the cupola….

Pigeons so daringly captured by the masons at Santa Maria del Fiore before the edict took effect were probably destined for the dinner pot.  Blackbirds also met this fate, for meat was a rare luxury for workmen, being eaten for the most part only on Sunday.

Fitting the project into the era

Look at what King is doing in these few sentences.  First, he’s giving a glimpse into the work of these men, so dangerous that they had to have a harness to catch them if they fell, and so remote that they had to bring their tools and lunches (including wine) up the many steps to their workplace, and so bothered (or tempted) by pigeons that rules had to be made.

Second, he puts the dilution of their wine into a context that they would have understood and that we, as modern readers, can understand — “a mixture normally reserved for pregnant women.”

Third, he lets us see these workers climbing into the hoisting tubs to swing hither and yon in an effort to grab the pigeons.  Through this, we see these workers as people, not just as human cogs in a dome-building machine.

Fourth, he tips us off that these guys weren’t just irritated by these birds but saw them as dinner as well.  As moderns, we look at pigeons and see pests.  But, through King, we understand that, for the people of the 15th century, they were a treat.

This is what I mean about King as a storyteller.  His book isn’t just about the building of the dome.  It fits that project into the era in which it took place and fits the project into the way people live, in particular how people of that time lived.

By the way, King notes that these and other safety measures seemed to have worked. In two decades, only three workers were reported to have died in raising the dome.

Another example of this approach is King’s writing about that humdrum object, the brick.

The size of bricks was carefully regulated in Florence.  The basic brick used in the construction industry, the mattone, was about 10 inches long and 5 inches wide….

The cupola, however, called for bricks of more unorthodox designs: rectangular bricks, triangular bricks, dovetailed bricks, bricks with flanges, bricks specially shaped to fit the angles of the octagon.

The sizes of these bricks were so various, and the templates used to design them to numerous, that at one point parchment ran short and Filippo was forced to improvise: he resorted to palimpsests, drawing his designs on pages torn from old books specially bought for the purpose.

What a wonderful detail that tells so much! “Pages torn from old books specially bought for the purpose.”

“He traced a full-scale plan”

The problem with drawing the plans for the bricks was only the tip of the iceberg.  When it came to larger designs for the dome, Brunelleschi had to find a way to show the workers and their foremen what he wanted.

King notes that, when necessary, medieval architects would draw lines on the soil of an open area, as Brunelleschi did in the summer of 1420:

Downstream from Florence he had a large area of the Arno’s bank leveled, an expanse roughly half a mile in every direction, and in the sand he traced a full-scale plan of the dome.  It is most likely that the templates for each of the eight vertical ribs were made from this enormous geometrical design.

Take a moment to consider this.  In an era before copies and before computers, here’s how Brunelleschi solved the problem of communicating with his workers how to construct the eight vertical ribs — by drawing a full-size diagram on sand in an area that was the equivalent of the 39 blocks encompassed by the four sides of the elevated Loop in Chicago.

Then, in four sentences, King explains clearly and simply what the ribs were used for:

These models, cut from pine, were eight and a half feet in length and roughly two feet thick.  Sheets of iron were used to stiffen them and prevent their warping.  They were fitted onto the outside wall of the inner shell, allowing them to serve as guides for both shells, which were built with identical inclinations.  Moved progressively upward as the dome rose, they ensured that the eight massive ribs would ultimately converge at the level of the fourth stone ring.

“Criminals had to be imported”

And so is this, a final excerpt for this review, which has to do with Brunelleschi being imprisoned in 1434 on apparently trumped-up charges for failing to pay guild dues.  He was locked up, King writes, in the equivalent of one of today’s minimum security prisons.

He was not held like a common criminal in Florence’s communal prison, the Stinche, …[which held] more serious criminals — heretics, sorcerers, witches, and murderers — for whom unpleasant fates awaited:  decapitation, amputation, or burning at the stake.

Executions took place outside the walls, in the Prato della Giustizia, “Field of Justice.”  These were popular public spectacles — so popular, in fact, that criminals often had to be imported from other cities to satisfy the public’s demand for macabre drama.

Now, there’s an insight into an era.  And quite a story told.