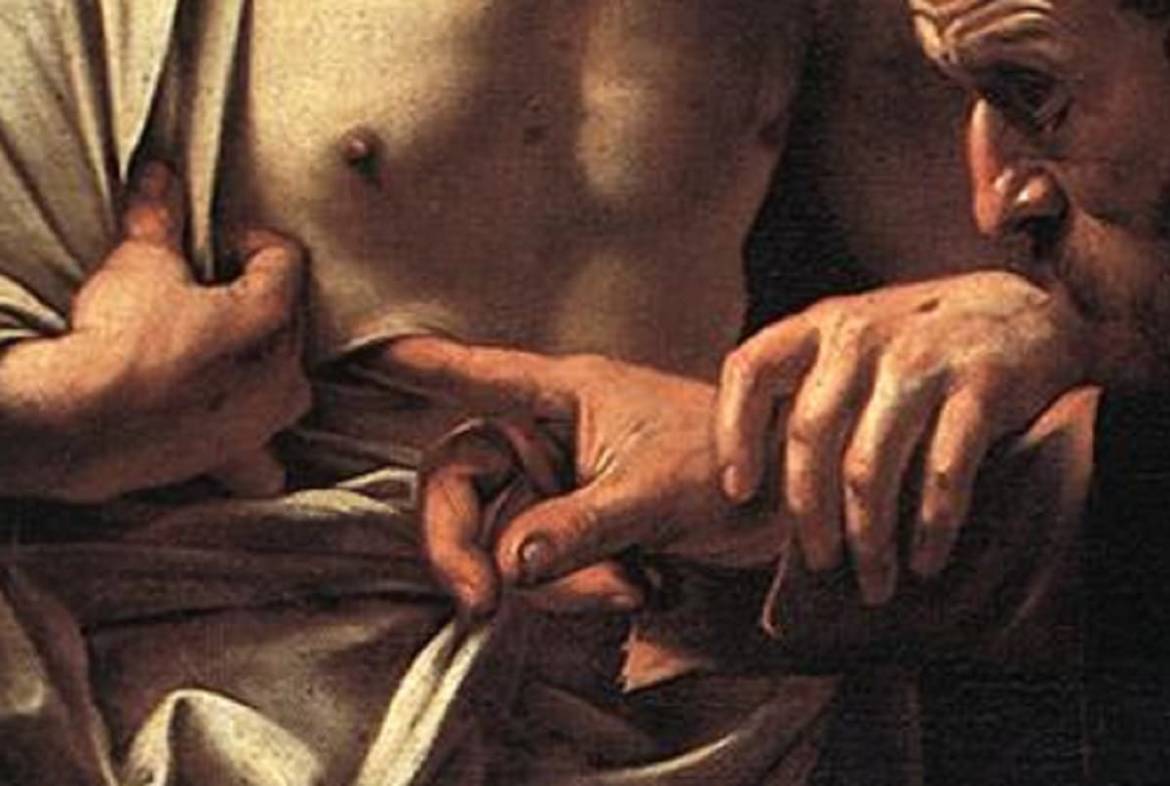 The cover of Christian Flesh by Paul J. Griffiths is a warning that this book of moral theology is not for the faint of heart.

It is a detail from Caravaggio’s 1601-1602 painting The Incredulity of Saint Thomas, and it shows the heads of the resurrected Jesus and the doubting apostle nearly touching and the Savior with a grip around Thomas’s hand.

Jesus has pulled the hand to the wound in his side, just below his left nipple, so that the disciple’s extended forefinger has entered the wound up to the first knuckle. (In John’s gospel, this is what Jesus tells Thomas to do although there is no indication he actually does it.  Caravaggio, as usual, amps up the drama.)

The painting is visceral, raw and, some would likely say, crude.  So, too, is Griffith’s book.

The beliefs of Christianity, particularly Catholicism, are rooted in the dual nature of Jesus as God, part of the Trinity, and as a real, flesh-and-blood human.  Yet, that flesh-and-bloodness is often given short shrift, except for the passion and crucifixion.

Jesus’s flesh shared in and shows all the ordinary features of human flesh.  It’s fragile and mortal; it touches and is touched by other flesh, human and otherwise, and is thus constituted properly as flesh; it’s placed in the world by its contacts with inanimate bodies; it leaks into the world by way of sweat, blood, spittle, and tears, about which Scripture is explicit, and, by implication, by way of urine, shit, and, perhaps, semen, about which Scripture has nothing to say; it ingests the world, taking in air by breathing, food by eating, and liquid by drinking; it is sexed, as male; it undergoes change and growth, from its conception in Mary’s womb to its maturity; and so on.

“Blood and other bodily fluids”

His reference to Jesus’s urine and shit is likely to make some uncomfortable, and even more his semen.  But, if Jesus was a human being, as we believe, his body had to deal with the sort of stuff we deal with, and, if he was a man, well, part of growing up from boy to man is that your body starts to produce semen.

There’s more in Christian Flesh to make the squeamish even more unsettled, such as Griffith’s reference to Mary’s vagina and this riff on the birthing of her son:

[T]here is no mention of the changes in Mary’s body due to pregnancy — the cessation of her periods, the swelling of her belly and breasts, her likely vomiting in the first trimester; the increase in frequency of her urination, the changes in her appetites for food and drink.  All of these are unmentioned.

The same is true for the birth itself: there’s no mention of the breaking of Mary’s waters, the contractions of her uterus, the pressure on Jesus’s body and head as it entered the birth canal, the blood and other bodily fluids that accompanied his birth, the cutting and tying of the umbilicus, the expulsion of the placenta and its disposal, Jesus’s first cries and urinations and defecations, his mouth latching on to Mary’s breasts and sucking the colostrum therefrom.

As Griffiths notes, these are subjects that aren’t discussed in Scripture and weren’t discussed by the early church.  Yet, what’s the alternative to this picture of Jesus “born into the world in a flood of blood and water and mucus and agony, as all babies are”?

“A glutton for privation”

This willingness on the part of Griffith to look full-face at the flesh-and-bloodness of Jesus is the strongest element of Christian Flesh.

I was less enthralled with other aspects of the book.  After all, it is a book on moral theology so there are some angels-on-the-head-of-a-pin aspects of it, important from the philosophical and theological point of view but of less interest for me.

In one place, I think he goes overboard trying to fit humanity into his logic. It has to do with his description of a person with bulimia or anorexia as “a glutton for privation.”  Eating disorders are considered diseases, like malaria or cancer.  I’m not sure what Griffiths is thinking.

No clothes, language or food

Woven through Christian Flesh is Griffiths’s discussion, rooted in Christian orthodoxy and teaching, of how our resurrected bodies will relate to Jesus’s resurrected body in heaven after the Second Coming. For instance, he writes that there “won’t be clothes in heaven…[and] there won’t be language or food.”

Okay, I understand that, for the logic of theology and philosophy, Griffiths has to deal with such questions.  But it’s not something I’m all that interested in.

My approach is not to spend a lot of time thinking about heaven or the afterlife since, for me, at least, the vision of what’s to come doesn’t tell me much about how to live here on Earth.

Griffiths, I’m sure, would argue with that approach, but it’s worked for me.

Even so, I find the concluding paragraph of the book attractive. Regarding our time in heaven after the Second Coming, Griffith writes:

“We expect the LORD’s caress, skin to skin.  That is the culmination of Christian life.  That is when Christian flesh becomes fully itself, unveiled to Jesus and with Jesus unveiled to it, in full tactile intimacy.”

That, I have to admit, sounds very, very nice.