Christopher Hibbert writes in a note at the start of his 1986 book Cities and Civilizations that, in contrast to more scholarly and comprehensive works, he aims simply

“to give impressions of the appearance and social life of twenty-one of the world’s greatest cities at crucial periods in their development, to glimpse at their origins and to indicate the nature of the civilizations in which they emerged and whose ethos they reflected.”

In other words, like all of his other books, Cities and Civilizations is filled with tantalizing anecdotes and pithy insights, presented from a deep wealth of erudition in a most readable form.

The goal here is to be serious — and have fun.

“A caricature of the Empire”

For instance, in the chapter on Vienna (1848-1916), Hibbert quotes from the book that David Pryce-Jones wrote about the city, particularly how it left Sigmund Freud so conflicted: “Ambivalence like his — a desire to enjoy the capital city but to nag it to death — is a kind of electricity specially generated in Vienna.”

“Yet it was difficult to make Freud travel, and only the Nazis put an end to the lifetime he spent in Vienna, forty-six years of it in the Berggasse [apartment building]…

“His theories spring straight from his environment. The ‘pleasure principle’ and ‘pain principle’ — what better reflection could there be of the positive and negative aspects of living in Vienna?  The ‘life force’ in conflict with the ‘death wish’ — what is that but a caricature of the Empire as it struggled with its own decadence.”

It’s a smart historian who know when to stand back and give the stage to another writer who has already made an important point in clear, colorful language. 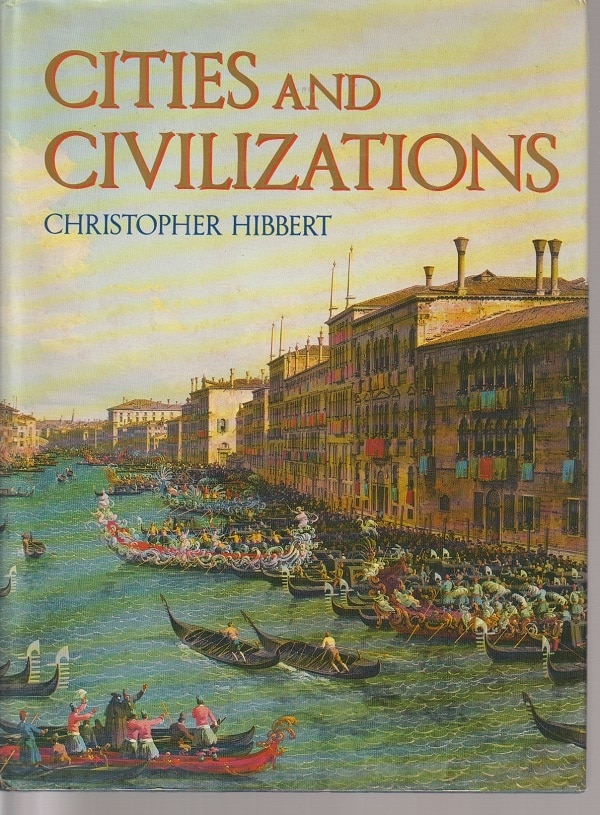 Hibbert is a historian who can describe places, people and objects with a joyous energy, such as in his chapter on London (1666-1723):

“Besides, alighting [at the Three Cranes] enabled visitors to see London Bridge itself, the ancient, top-heavy structure which seemed in danger of imminent collapse as carts and carriages rumbled constantly across it over the narrow roadway and between the bulging houses and haberdashers’ shops, whose projecting backs, overhanging the water, were supported on great wooden beams and whose upper storeys were joined together by iron tie-bars to prevent them toppling backwards into the river.”

That’s all one sentence, the sort of thing that high school English teachers abhor, but I dare you to read it and not enjoy the trip, for, often, to start a Hibbert sentence is to go on a journey that may be longer than you expect but will never bore.

In another single sentence, this time in a chapter on Rome (53-117) Hibbert takes the reader out of the crowded Roman apartments of the less-than-affluent and out into the streets:

“As the rooms in which they slept were so uncomfortable, it was natural that many Romans preferred to spend their days in the street, joining the shopkeepers who displayed their wares there, the children repeating their lessons, the itinerant vendors shouting their wares, the butchers sharpening their knives, the jugglers, snake-charmers and acrobats, the craftsmen working at their various trades, the beggars thrusting forward their bowls and cans, the sausage sellers cooking their meat, the barbers cutting men’s hair with iron scissors in an attempt to imitate the latest fashion, curling the locks of the young, dyeing those of the old, and, without benefit of soap, shaving chins with razors which were usually blunt despite frequent recourse to the whetstone, and, when their arms were jogged by the crowd, staunching the consequent flow of blood with spiders’ webs soaked in oil and vinegar.”

That’s a sentence with 143 words.  I look at what Hibbert has communicated in that sentence, and I stand in awe and respect.  I’m not sure how a writer  even starts to draft a sentence like that.

I mean, did Hibbert sit down with the idea of writing this long serpentine thing or did it just happen, as it happened over and over again through his prose in this book and his others?

The writer part of me thinks he wanted to end with the spiders’ webs and so planned the barbering for the end.  And I suspect he liked the idea of having the beggars and sausage-sellers right before the barbers.  The opening was a way of getting the reader out of the apartment buildings and into the streets, and the rest of the detail sort of fell into place as he wrote.

At least, that’s my theory.

Hibbert, though, doesn’t only write long sentences.  He can be (relatively) pithy when that’s what’s needed, such as, in his chapter on present-day Sydney, he tells of the construction of the largest single-span bridge in the world in the city’s harbor.

“The opening ceremony took place on 19 March 1932 and proved unexpectedly exciting.  As the Labour prime minister, J.T. Lang, stood ready to cut the ribbon with a pair of golden scissors, an eccentric and disgruntled officer, strongly opposed to his policies, charged wildly forward on a horse and slashed through the ribbon with his sword.  Spectators stood aghast, the band stopped playing, three women fainted.  At length the ribbon was re-tied and Mr. Lang made use of his golden scissors.”

I’m not sure which of those many details delight me the most.  It may be that three women fainted at the unsanctioned slicing of the ribbon.  Or maybe it’s the re-tying of the ribbon so the minister could put his golden scissors to good use.

In his chapter on Amsterdam (1606-1669), Hibbert notes that the men and women wore very plain clothing and were criticized by visitors for “the complacent regularity of the houses.”  But that wasn’t the whole story:

“Yet the people of Amsterdam turned out to be far more lively and engaging than their reputation allowed.  They were indisputably hardworking and conscientious; they held money in awesomely high esteem; but they did not let their industry dull their sense of pleasure.  The city was as teeming with life as its harbor was teeming with ships.  The streets were filled with sailors and porters, coachmen and rope-dancers, with women in wooden shoes washing the stones, with street vendors and money-changers, and young men and women going to dance in the Speelhuizen.”

That is, in a sense, a thumbnail social history of Amsterdam at a moment in time that captures its essence with great verve, excitement and clarity.

Finally — I could go on and on quoting Hibbert but I must bring this to an end — let me offer a Hibbert insight from his chapter on Venice (1697-1798):

“According to Carlo Goldoni — who was born in 1707 in Venice where many of the best of 250 plays of which he was author were performed at the Teatro San Samuele, the Sant’ Angelo and the San Luca (now the Goldoni) — everybody sang in Venice.  ‘They sing in the campi,’ he wrote, ‘in the streets, along the canals.  The merchants sing while offering their goods; the gondoliers sing while they wait for their masters; the workers sing on their way to their workshops.’ ”

Book review: “A Distant Heartbeat: A War, a Disappearance, and a Family’s Secrets” by Eunice Lipton